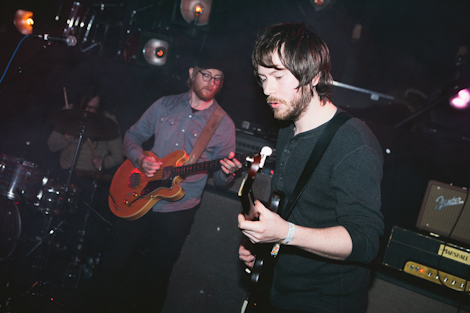 Getintothis’ Alistair Houghton has his beard tugged by a blistering lupine howl on day two of Sound City.

Folk, prog, psych, changing time signatures, dueling guitars – it all sounds like an Old Grey Whistle Test episode, right? No – it was Wolf People at the Kazimier, and it was my blisteringly brilliant highlight of night two at Sound City.
My first stop was East Village Arts Club, where Glass Animals washed in with a sampled whooshing wind before they slid into their dark grooves and dubstep dalliances.
The oddly soulful tones of David Bayley – who’s studied neuroscience, so Mr Google tells me – top their moody synth pop, Bayley sometimes clutching guitar, sometimes drawing shapes with his hands in the air as he crooned.
They switchbacked between pounding juddering dark soul-edged goth r’n’b infused pop and jittery dubstep interludes, all washed by ear-rattling spooky keyboards, that almost ever-present stormy wind sound and even Floydian sonar pings – plus a bass sound so heavy it shook the room.
For music that should be so precise it sounded poised on the edge of falling apart. All adds tension, I guess.
Mind you, the multicoloured quilts that covered their two keyboards didn’t match their sparse, sometimes almost xx-ian grooves. A homely touch, perhaps.
Speaking of synth beats, similar ingredients made a very different cake for No Ceremony/// up next in the loft. There was indeed precious little ceremony – no intro at the start, and a terse thank you and goodnight at the end.
But inbetween there was more gut-pounding bass, this time with pounding bass synth drums right out of Blue Monday, stabbing and bubbling synths, and even an acoustic guitar crunching chords over the opening songs, all topped with ice cool vocals.
They clearly weren’t happy with the sound – the singer-bassist’s ice maiden facade cracked a couple of times for apologetic smiles aimed at the mixing desk, and the guitarist/keyboardist to the right never looked happy.
But their sampling synth drummer kept his headphones in and head down and got on with the beats, and their coolly stomping set seemed to get pretty much every head in the house nodding with happiness.
But nodding is one thing. Grinning with the zeal of a religious convert is quite another.
I’ve been waiting for a band to leave me with a great big smile on my face and Wolf People, finally, was it.
Right from the get go their two-guitar prog psych attack grabbed me right by the beard.
The bearded four-piece veered from gentle folk to pounding psych to crunching riffs to twisting prog, usually in the same song.
Frontman Jack Sharp’s vocals are pure English folk, and Wolf People have more than a touch of a psyched-up Fairport Convention about them, with Richard Thompson’s guitar lines cranked up to 11. 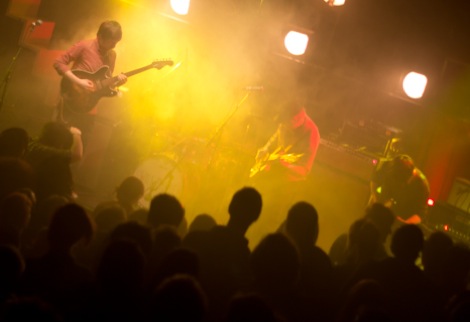 Wolf People – lupine magnificence
It’s such a tight unit, and they’re such brilliant musicians, that you lose yourself in the sound and don’t even realise they’re flipping through different time signatures all the way through as though it’s the most normal thing in the world.
But there’s even a Black Sabbath grind in parts, and one song crashed to a finale in a duelling guitar frenzy as though they’d channelled the spirits of an English Lynyrd Skynyrd.
Almost finally, One By One From Dorney Reach crashed to a close and Wolf People made to leave. But the crowd wasn’t having it, not at all. “More“, they bayed. “One more song!” And after a nervous consultation with the sound desk, they gave is another song before departing to raucous cheers and lots, and I mean lots, of happily wigged-out Kazimierites.
It was hard for the next act not to be a comedown, and so the song and a half I caught of screamy punk metallers These Monsters in a half-empty Screenadelica couldn’t do much more than remind me of student days in front of MTV2.
That was hardly their fault. Singer-guitarist Sam Pryor gave it his all, topless and leg-kicking as the lights strobed to a finish. But it must be tough to bellow that passion to a half-empty half-exhibition hall.
Plus, white tiled suspended ceilings don’t really bring atmosphere to a venue, do they?
The Zanzibar’s tiles, of course, are painted black. And, after a cracking synth squealing power pop thrash closer from Splashh, it was time for the Theme Park to open.
Their set of driving pop-funk, anchored by monster basslines, got the Zanzibar grooving with more than just a few nodding heads – there were some pretty enthusiastic dancers in the middle of the room waving around a set of coloured lights. 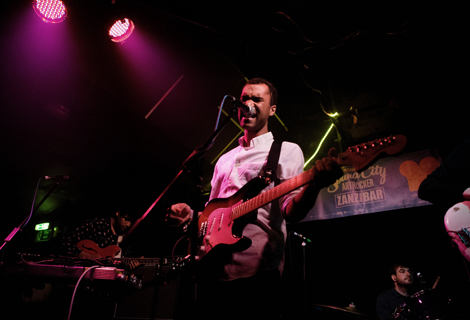 Theme Park – monster rollercoaster pop-funk
Onstage, singer Miles Haughton’s voice soared from baritone to falsetto, while twin Marcus switched between guitar and keyboard, stabbing out steel-drum esque sounds.
With Tonight as its falsetto-led stomping disco highlight, this was a shiny tune-packed, danceable and popular set – not a bad way to end a Sound City night.
Pictures by Getintothis’ Tom Adam and Matt Owen.