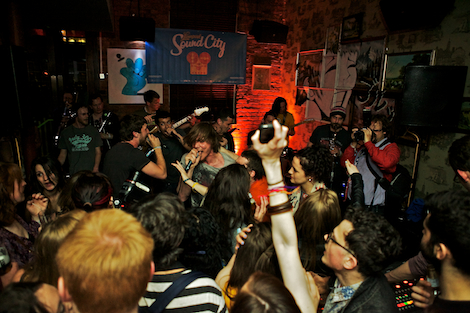 Fire Beneath The Sea set the Williamson Tunnels alight with a fresh and vital performance, Getintothis’ Julian Roberts was there to catch the spark.

Over the past year a juggernaut has been rolling over the Liverpool music scene.
It’s due to crash into your homes and places of work, powered by love and inclusion and a creative wheelbase second to none. They are The Fire Beneath The Sea (FBTS).
Recently crowned winners of The Hunger Games battle of the bands competition, FBTS are nothing short of a real spectacle.
Powered by a production talent that is second to none, they are an inclusive collective of MCs, more ‘traditional’ instruments and the added bonus of brass, flute and sax to add some sugar.
What emerges from this soup of creative genius is a blend of melodic hip hop with energy and catchy hooks that simply make you want to move.
Getintothis managed to see this fine bunch at the Williamson Tunnels; a different kind of venue for a different kind of band.
The evening was also host to the Lemon Collective, which also saw poetry, comedy and art in the theme of advertising.
As the band begins, the lead MC Armen Starfish makes it quite clear that the energy on stage is going to become a part of us as an audience.
As the music builds and the energy grows, the audience grows in stature too. That is what makes a FBTS show: the audience and the band start to become one.
Let Your Hips Go Wild, Trippy Individual and Poor Little Fishy demand you hit the dancefloor while in between tracks the energy keeps flowing with some great on-stage patter.
Later in the show there was a request for a theme for a freestyle rap, which happened to be about a bus pass highlighting the band’s intrinsic nature; inclusion for all in their shows and their music.
Having had more exercise than we usually get in a week, Getintothis went home with some seriously good vibes ringing in our head.
It was then that we were reminded of how the band helped to protest against the BNP last year: “Don’t be racist, be creative.”
Such a message is one badly needed and sorely lacking in these difficult times. So let the juggernaut roll on and if you get a chance, get on board.