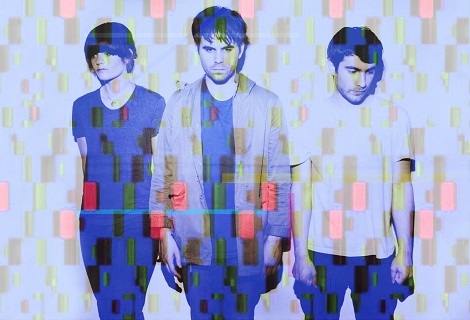 Factory Floor come to the Kazimier in December armed with one of the debut albums of the year and the promise of a superb live show, Getintothis’ Mike Townsend met with them to talk about being pigeon-holed, their creative methods and the future.

Post-industrial. Tech-disco. Funk-noir. Who even knows?
These sort of weird, meaningless terms seem to follow London’s Factory Floor around, as they avoid classification by traversing an astonishing array of genres and influences.
And with a debut album out on DFA earlier this year, long-serving fans of the band finally have the chance to see how they contextualize within the boundaries of a singular body of work.
Three years of almost constant touring has allowed them to cultivate their sound around a deep respect for the way people experience it. So from their atmospheric, challenging earlier singles, they have found more focus, striking a better balance between song craft and atmosphere and creating a record that more than anything else, is extremely enjoyable to listen to.
They are still one of the most brutal propositions on stage you’ll experience this side of Deafheaven, but unlike before, they’ve left the door of these new songs just slightly ajar, making them more accessible and ultimately, more rewarding.
Ahead of their show at the Kazimier on Thursday December 5, we caught up with synth man Dominic Butler as he prepared for the next leg of their world tour.
Getintothis: So how are things?
Butler: Busy. We’re just getting ready for the upcoming shows.
The tour has been great so far though. We just did the European bit, which was good fun, and now we have Japan coming up. So busy busy busy really.
Getintothis: It’s taken a few years for the debut album to come around. What’s been the hold up – did things just keep coming up or were you deliberately trying to hold off?
Butler: It was a bit of both really. We were developing our sound for the recording really – you know, going away doing a lot of gigs, playing together as much as possible.
Most our songs start from playing live and then we kind of improvise a bit from there, so a lot of the performance aspect drifts back into the recordings.
We were always aware there was more time needed if it was going to turn out how we wanted it, so we needed to hold off to keep that natural development going.
Getintothis: Is that how you approach the song writing as well – just laying it all out and seeing what happens, rather than meticulous planning?
Butler: Yeah totally. I don’t think we’re able to do it any other way really, as we don’t have any musical background or training.
Getintothis: Yeah, we saw in your interview with Dummy Mag that you avoid coming at songs on a melodic or tonal level.
Butler: Exactly. It’s a very instinctive thing. When you’re writing by yourself you lay something down, think it sounds good and then move on.
When there are three of you are doing it, there is a point where chemistry comes in and it’s not a monologue anymore; it’s a dialogue between the three of you and you know when it starts to sound right.
It usually starts quite rhythmic, with a pulse or a beat on the guitar or drums or synth, and you know, we just build from there and go with what feels right.
Sometimes it goes completely wrong and you step back and start again, and other times it doesn’t and we come away with a song.

Getintothis: That certainly comes across on the album. The whole thing almost feels very primal, not dissimilar to the way a lot of electronic, mainly techno, producers approach it.
Is techno and electronic music something you guys associate with quite closely?
Butler: Yeah absolutely. Its part of our culture really, to the point where its really shaped and formed what our generation calls now.
The live shows we do tend to either be more performance based, gallery based shows, or they are full on techno nights.
We’ve played Warehouse Project a couple of times now, and we absolutely feel at home there. That environment is perfect for what we do, because that sort of crowd isn’t expecting fully formed, three-minute songs anyway, which is what we like to stay away from.
Getintothis: The album certainly feels more dancefloor ready, with steady pulses and throbbing synth. And compared to your earlier singles, which were more atmospheric and focused around noise and timbre, it certainly feels a lot more beat driven.
Is this something that’s developed gradually with the shows you’ve been playing and the music you’ve been listening to?
Butler: We were very aware that we were getting pigeonholed into that sort of heavy, industrial, slightly serious corner early on. And whilst that stuff is important to Factory Floor, we still like to have a laugh we like fun.
So with the album, we thought carefully about this space we had and how we could use it, and whilst we do occasionally nod back to the earlier stuff, we wanted to show that side of us as well.
Getintothis: Has that influenced the venue choice for the upcoming tour then? You mentioned earlier that you used to play a lot of shows in galleries and exhibitions. Will you be moving away from that?
Butler: I don’t think so. I think that sort of space has worked very well for us. I mean I love the idea of playing these quiet, subtle venues and bringing our loud, dance elements into them. So I think we are going to stick with this.
For us, the most important thing is that the venue is interesting and manages to resonate in some sort of way. Whether that be the Warehouse Project, the Berghain or the Tate.
These are all great places to play because they have a character, they have something about them rather than being just a bog standard venue.
Getintothis: It was interesting to hear you talk about being pigeonholed earlier, because you see a lot of journalists come up with all kinds of weird terms for your music.
We’ve seen things like Post-Industrial, Disco-Noir, Noise-Funk; all meaningless really. Do you get any pride when people struggle to classify you?
Butler: I think it’s interesting that people need to classify us. We are just experimental really, that’s how I’d like us to be described. 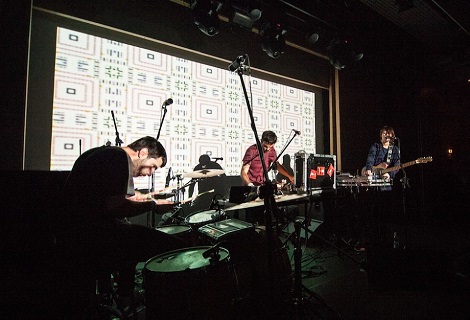 Getintothis: Does that experimentation come quite naturally to you guys? Or are you making a conscious effort to push the boundaries?
Butler: It comes naturally to an extent, but it is still very important to us as a band. I think if we could not longer do that with Factory Floor then we wouldn’t exist.
We all share that mindset, and I think that comes largely from not being musically trained, and from having to find our own way with all these instruments. We have to test and experiment as we figure out the best way to play it.
Getintothis: Can you see another drastic progression with your next album then?
Butler: Absolutely. We don’t like to repeat ourselves. It doesn’t feel like a conscious thing, it’s just what we do, we need to move forward and we need to experiment, even if we are just pissing about with new sounds.
Getintothis: You were all living together in a studio space when writing and recording the album. What was that experience like?
Butler: Yeah, I lived down the road for most of it. It was great actually. It totally shut us off from the rest of the world, and I think we really needed something like that.
We had always looked to get our own space, something that was just ours and that we could occupy. So when the time came to getting the album sorted it seemed like the right thing to do.
Getintothis: Did you feel any relief when the album was finally finished?
Butler: It was intense and it was very draining. But it worked, and it isn’t often you get to do something like that in your life.
I’m not sure we’d do it again though. Next time might be a case of going away somewhere and just spending two weeks of solid writing.
Getintothis: You worked on high profile releases with the likes of Peter Gordon and Mark Stewart before the album.
How do you approach collaborations? With such a powerful and distinctive sound, we imagine you’d have to make some concessions?
Butler: Collaborations are definitely important to us, and they keep us on our toes in many ways.
The Peter Gordon one was interesting. We were doing an ICA years residency, so that helped get things into place because we had a venue and a routine to work around.
We just emailed Peter and told him we liked is stuff and asked if he’d be interested in working with us. The people we like to work with are generally further down the experimental line than we are, so it works very well. We’re heading over to the States in mid December, and I think we’re going to do something else with Peter.