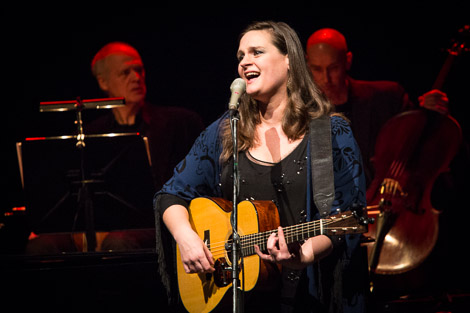 Madeleine Peyroux traded Leonard Cohen, Randy Newman and tracks from her back catalogue at Liverpool Philharmonic Hall, Getintothis’ Dickie Felton let himself be carried away into the night.

Anything that comes out of Athens, Georgia is usually the business. R.E.M., the B-52s, and Madeleine Peyroux are three such examples.
The 39-year-old jazz singer/songwriter brought her nine piece band to the Philharmonic Hall and wowed the large audience with songs sung to perfection.
She rushed onto stage as if she was late for her bus. Looking breathless and slightly on edge she quickly found her groove and settled into the intimate evening in no time.
Delicate songs with a smoky voice to die for, is the best way to describe the Peyroux live experience.
With a fantastic band behind her she played most of her latest album The Blue Room which sees her cover old classics by the likes of Ray Charles, Randy Newman and John Hartford.
In between melancholic numbers she spoke about drinking, sex, dirty old men and how she’d been perfecting a British accent.
“Here’s a French song,” announced Peyroux, “…so it’ll be about sex…” But before we got past foreplay, the moment was ruined by a mobile going off in the crowd. An unimpressed singer promptly ordered her string section to stop while chastising the interruption. 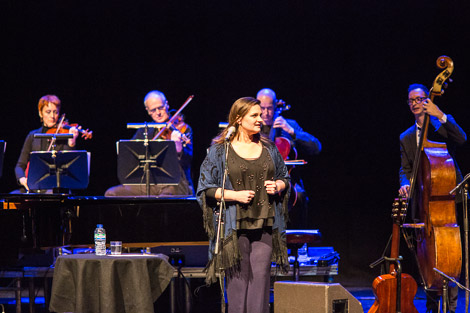 Madeleine Peyroux leads her charges at the Philharmonic Hall, Liverpool
The stand-out song of the evening was a rendition of Warren Zevon’s Desperadoes Under The Eaves, while two Leonard Cohen songs, To The End Of Love and Bird On A Wire, also thrilled the Liverpool crowd.
Towards the end of a fantastic set, she quipped: “….sad songs give me so much joy…”.
The ovation received at the close of the night indicated that her audience feel the same way.
We must mention Liverpool support singer Robert Vincent who also arrived on stage in rushed manner: “I got a late call,” he admitted.
He proceeded to play his acoustic guitar with love and sadness. Almost like a Scouse Tracy Chapman – if you can ever imagine such a thing.
Vincent is back at the Phil in January supporting Paul Carrack. Check him out.