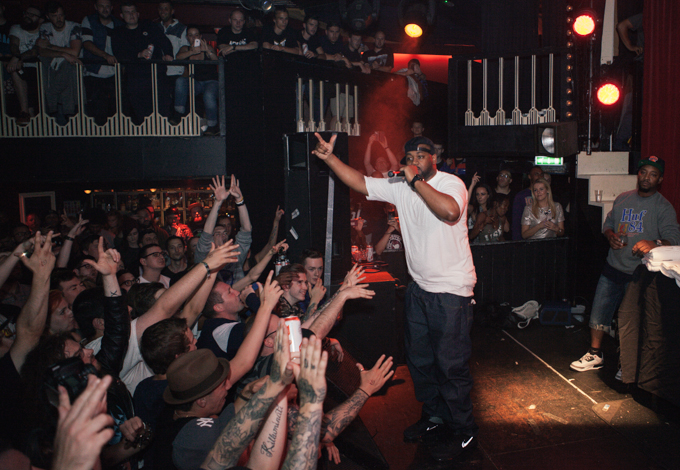 Midway through Ghostface Killah‘s sweltering set at the Kazimier club, the veteran MC announced it was time for the classic Wu-Tang Clan hit Protect Ya Neck.

Now, there can’t be many 90s rap fans who don’t know the lyrics to this track off by heart, or who haven’t at least sung along in their car. And when the 44-year-old asked the question “who has been down with Wu from day one?” most of the crowd had stuck their hands up in the air.

But when he revealed he needed two volunteers to handle Method Man and Ol Dirty Bastard‘s verses, a lot of hip hop heads suddenly suffered a bout of amnesia. I count myself in that number – having no desire to test my lyrical dexterity, 8 Mile style, in front of hundreds of braying fans.

Fortunately two Wu-enthusiasts stepped up to the plate, encouraged by Ghost who urged the crowd to “go bananas for them if they do good…” and “boo them off the stage if they suck”. 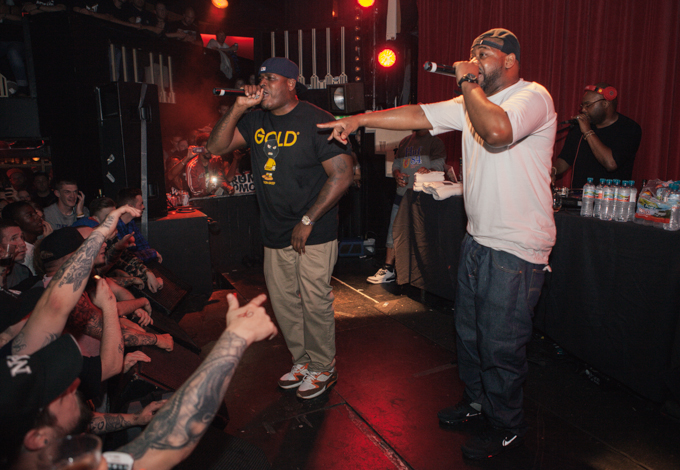 Ghostface performing live at The Kazimier

They took to the mic as a pair of unknowns but left the building as legends, nailing every line, every vocal inflection – “nuff respect due to the one-six-ooh” – and soaking up some well-deserved adulation.

As far as audience interaction goes, the chance to perform alongside one of the greatest MCs in hip hip history is right up there, and this was just one of the highlights of a raucous set.
What Ghostface lacks in timekeeping he makes up for in showmanship, the rapper otherwise known as Tony Starks taking to the stage after 10.30pm to the sound of Jack Urbont‘s Iron Man, his namesake’s theme from the 60s cartoon The Marvel Superheroes.

His DJ, The Technician, had hyped the crowd with some classic cuts from the likes of Mobb Deep and Big L, a tribute to Jam Master Jay, some furious scratching and a rendition of Salute A G by the Lox, which paved the way for Ghost‘s on stage partner for the evening, Sheek Louch.

Sheek of The Lox collaborated with Ghostface on the 2012 LP Wu Block, which brought together the Wu-Tang collective and the stars of D-Block Records. On stage their partnership is a good fit – the dense imagery and storytelling of Wu-Tang meshing well with the hard hitting, underground sound of their New York peers.

At first Ghost stood on his own, sporting a red Hustle Gang hoodie, black cap and jeans, and launched into Nutmeg, the opening, barely decipherable track from his 2000 album Supreme Clientele.

Next, and appropriately so given the balmy temperatures in the building, was a rendition of Ice Cream – an ode to the female form and one of the standout tracks on his Wu-Tang soulmate Raekwon‘s Only Built 4 Cuban Linx.

Sheek joined the party and the pair performed arguably Puff Daddy‘s finest track, It’s All About the Benjamins, which Louch starred on back in 1997. The muscular rapper, who dwarfs even Ghost‘s sizeable frame, was clearly having a good time, leading the crowd in its chorus: “It’s all about the Benjamins baby, wanna be ballers, shot-callers.”

The rising energy in the venue was matched only by the heat, as the strong scent of weed mixed with pungent, dripping sweat. Wiping his brow with a towel, Ghost declared “it’s 1,000 degrees in this motherfucker” before commanding the crowd to “roll that shit, light that shit, smoke it”. 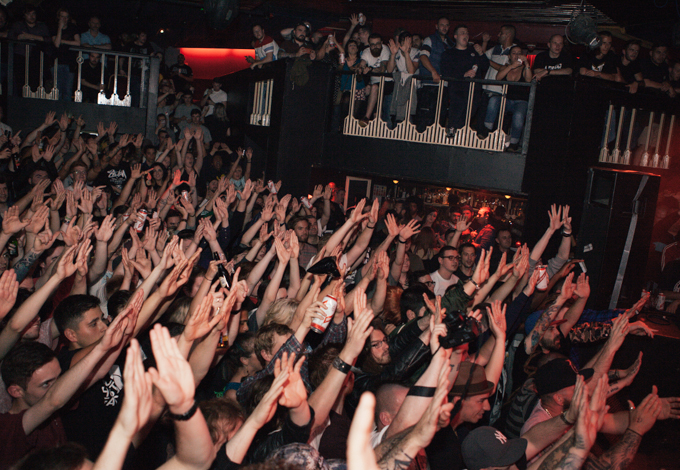 Ghostface performing live at The Kazimier

The audience lapped it up, as they did a rendition of the classic GZA track 4th Chamber, with Ghost posing the questions: “Why is the sky blue? Why is water wet? Why did Judas rat to Romans while Jesus slept?”

Ghost‘s son, aka Sun God, was stood at the back of the stage bopping his head, and he stepped forward to spit over the Luniz I Got Five On It beat, later delivering a frenzied verse to the backdrop of Nas‘ One Mic.

However, it was Sheek Louch who threatened to steal the show, assuming control after Holla from The Pretty Toney Album with some powerful blasts from the Lox back catalogue, including early single Money, Power & Respect and the Ruff Ryders Entertainment era Wild Out.
Ghost said he wanted the theatre “lit up like a birthday cake” and a plethora of phones and lighters was the signal for two of the Clan‘s most introspective songs – Can It Be All So Simple and Tearz – sampling the wonderful Gladys Knight & the Pips‘ cover of The Way We Were and Wendy Rene’s After Laughter (Comes Tears) respectively.

After all that soulful soul-searching Ghost decided it was time to lift the atmosphere and did so in perhaps the most bizarre way possible, declaring “I want to salute some icons that come from here”, before leading a room full of hip hop enthusiasts in a sing-a-long to Hey Jude. After that Beatles oddity, a brief mosh to Nirvana‘s Smells Like Teen Spirit seemed by-the-by.

The glorious scenes that greeted Protect Ya Neck were followed by a staple of any Wu show post 2004 – an ode to ODB featuring Shimmy Shimmy Ya and Got Your Money. While tributes to fallen friends were being paid, Sheek gave a shout out to his former collaborator The Notorious B.I.G., with snippets of Hypnotise and the Lox collaboration Last Day.

By now it was time for nothing but stone cold classics, with The Technician blasting out Wu-Tang Clan Ain’t Nuthing Ta F Wit and C.R.E.A.M., which sent the crowd into raptures. Sheek responded in kind with Kiss Your Ass Goodbye – the rapper playing ‘air piano’ along to its opening keys.
Inviting half a dozen girls from the audience on stage to dance, the duo warned the club’s curfew would soon bring the set to a close, but there was still time for an airing of Supreme Clientele‘s Mighty Healthy.

The show ended with another double salvo of Wu-Tang favourites – Gravel Pit and Bring Da Ruckus – the latter, by audience request, showcasing one of Ghost‘s all time best verses.

Expressing his love for Liverpool, he reluctantly left the stage, taking to the mic to give a parting message: “Promoter – book us again. Any time we’ll be back.”