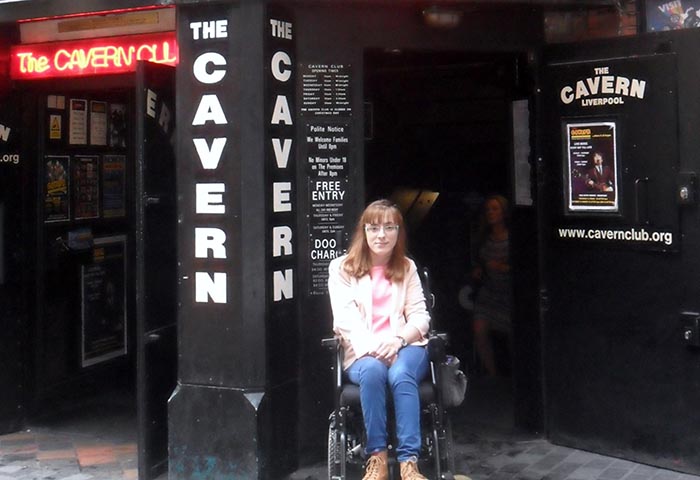 Steph Niciu on Mathew Street outside The Cavern Club

Going to a gig should be one of life’s small pleasures but for Getintothis‘ Steph Niciu it can result in a big problem, here she thrusts the spotlight on the everyday issues that hit disabled music fans hard.

The landscape of Liverpool’s live music scene is one that has gained strength over the years with great talent and an eclectic mix of sounds coming to the city. However, going to gigs can be tough for a wheelchair user, like myself. Why? Because before we can get in on a piece of the action, we need to pose ourselves a wee question: Is this venue wheelchair accessible?
Let’s face it, this isn’t a ‘wee’ question at all. In fact, it’s quite a big one, which if you don’t have an answer to, can be bloody annoying. I’m a big music fan, I always have been. I’m a girl whose taste is pretty varied. From effervescent pop to a smidge of RnB. Anything goes. Even a bit of rock. I find it quite difficult to resist a mean guitar riff or the purr of a bassline. Muse’s Hysteria is my personal favourite, if you were wondering.

So, I decided to grab my wheels and do some investigating. Going to six of the most popular gig venues, including:  East Village Arts Club, 02 Academy, The Shipping Forecast and The Cavern Club. I wanted to find out exactly about the places that were accessible and what the experience was like if you could get in. For the others that were a ‘no go’ for wheelchair users, I would pop in for a visit to see why that was so, and use this as my main reason to give them the evils whenever I passed the establishment in the future. And, I have to say, I was pleasantly surprised by what I found.

This sounds exciting, doesn’t it? But hang on, you can’t just parade into a gig and think that you’re the boss, wheels or not, without a ticket, can you? No, sadly, you can’t.

Booking tickets was predominately done through the phone.  Easy enough, you may think. As I discovered, you need to purchase a standing ticket as opposed to booking an accessible seat for yourself. From past experience, attending other music events, like those at the Echo Arena, you are required to ring a specialist ticket line.  And, most significantly, how you do this is always clearly stated on their website.

One of the major issues I noticed, was that most of the venues I visited, did not have this information. At all. This really frustrated me. There are pages on a number of their websites that direct you to a ticket provider. But if you’re in a wheelchair, there literally is nothing. When booking one gig, I spent 45 minutes on the phone being put through to three different lines to book for myself.

Also, venues should offer a ticket for a Personal Assistant, who you either have to pay for (usually standard ticket price) or goes free to events where you need physical assistance. If detailed information was made readily available to view, on a venue’s website, which outlined the process of how to book an accessible ticket and relevant PA policies, then this would save me and others a lot of time (and stress!).

Tickets bought, I was ready to head to my gigs. It is fair to say, that why gig venues lack accessibility, is because many have either been formed by inhabiting an older building or come with some dreaded stairs (cue collective moan). So, even if a place seems to be wheelchair friendly, it most definitely doesn’t have complete access.

This means that you might need the assistance of a ramp, lift or a helping hand over a small step to get into the building. Having taken this into account, I was really impressed by the approachability and friendliness of staff at the venues. They went out of their way to make sure that I was able to get in. Once I had, I needed to manoeuvre myself into a standing set up, which wasn’t always easy, but I managed to make the best of it with assistance. In some cases, I didn’t even have to do that, as the gig was seated. Win.

Steph Niciu on Slater Street, Liverpool outside The Shipping Forecast

In one venue, I was placed as close as possible to the front of the stage. I saw Foxes in her wonderfully trancelike state, belting out some fantastic pop, which I very much enjoyed. But being like this, meant that I felt cut off from the main crowd and the atmosphere that came with her performance. I guess that is something that you have to accept because if I was in another position, then I wouldn’t have been able to see.

Just like the rest of the crowd, you need to make compromises and I suppose, as long you have a good enough view and can enjoy it, then that’s what matters.
And, of course, toilet facilities need to be addressed. They were there, definitely. Just not always very close to get to. Well, that’s not a major problem since as a gig goer, you can just sweat out all of your toxins.

If you’re down with that, then cool. But most of us aren’t. Thus, a loo does come in handy. While most were in good range, others were in another part of the building or floor altogether. This wasn’t ideal but, I think, something you need to keep in mind when going to a gig.

Overall of the venues I investigated, only one was completely inaccessible – The Hold – downstairs in the Shipping Forecast‘s basement. Now, if I’m honest, that’s a fair result when assessing the city thus far.  Before I wrote this piece, I thought that it would be quite the opposite.

When I asked The Shipping Forecast for the reason behind their lack of accessibility, they told me: “The main bar is accessible via a back entrance. However, The Hold is not, as it is in the basement. Apologies.”

Fair enough. If there is absolutely no way of physically getting down to the gig, then there is not much you can do. Plenty more venues in the sea.

Of the gigs I went to, I was disappointed that I was the only wheelchair user in attendance. Yes, you could say that I was reppin’ for the disabled community or it was simply that there weren’t any others that fancied them. Somehow, I doubt it. I think there is more to the issue than that. If venues are accessible, why don’t they advertise it? If we were made aware of the fact, then we would be less ignorant about what is available to us when it comes to gigs.

This experience really opened my eyes to the live music that is accessible to wheelchair users. If venues worked harder to encourage this, then more of us could enjoy what music this fabulous city has to offer, along with everybody else.