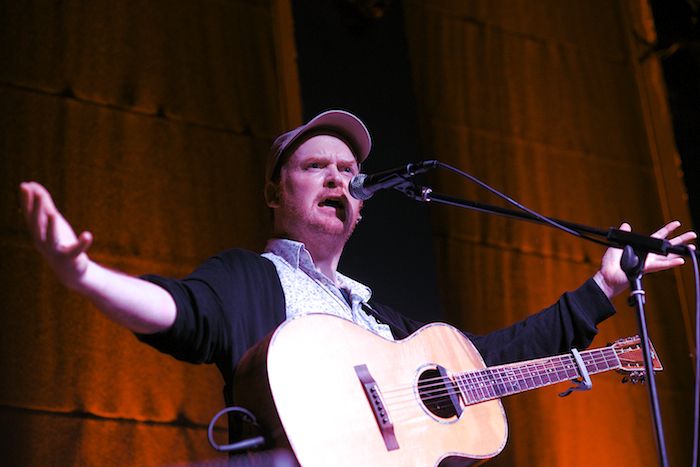 James Yorkston competes against the clamour of an open mic, Getintothis’ Alan O’Hare gets more than he bargained for with two gigs for the price of one on Bold Street.

Music isn’t supposed to be funny. In fact, it’s kind of uncomfortable when it is.

Can you think of a great comedy song? You’re not really a music fan, then. But, the bits in between songs at a gig, they’re vital. And it’s essential an artist can fill the space in the air when tuning, preparing or whatever for the next track. You’ve got to have the wit to swim and not sink.

Domino recording artist James Yorkston, in town to promote latest disc The Cellardyke Recording and Wassailing Society (the music is as long winded as the title), has got the gift of the gab. Good job, really.

As, once again, a weeknight gig upstairs at Leaf on Bold Street was affected by the hordes gathered for the (free for all) open mic in the main room.

“Two gigs for the price of one,” quipped Yorkston. But he didn’t mean it, really. He’s just experienced enough to use grace and humour as a defence mechanism and turn a problem into an opportunity. His attitude was top class.

And the tunes weren’t bad, either. True, on record, his latest set of songs are an acquired taste – but delicate strums through Fellow Man, The Blues You Sang and the heart-breaking Broken Wave, the latter written as a tribute to his late friend and long-time bass player Doogie Paul, are worth the price of entry alone.

Alongside double bassist (and Scouser, ex-John Smith band) Jon Thorne, whose Danny Thompson-esque melodic hiccups accent the music perfectly, Yorkston paints a picture far exceeding the limited palette at his disposal: his acoustic guitar playing goes from delicate finger picking to thunderous strumming from song to song. At times, the musicianship is breath-taking.

The songs don’t always match the virtuosity, however. It’s a shame, as the gig was a cracker. But Yorkston may well be just an album or two (of ten classics) away from entering the premier league. Let’s just hope he chooses to forgive Liverpool and return to see us. And Leaf can postpone the open mic. 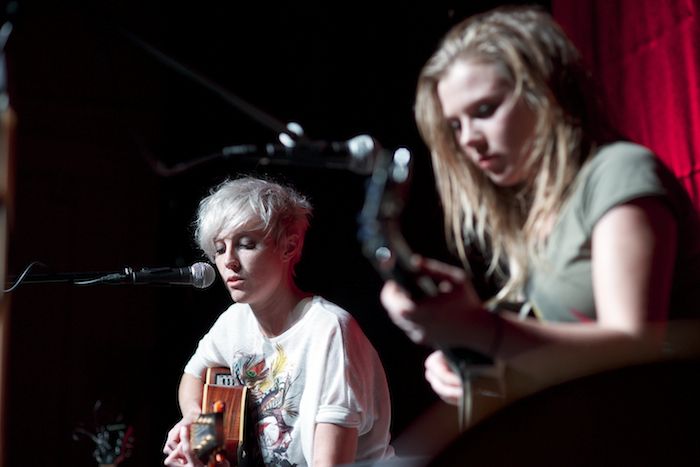 Liverpool’s rising solo star, She Drew The Gun, were the evening’s main support and captured that attention of a packed room.  She Drew The Gun is the music project of Liverpool’s Louisa Roach and, based on this relaxed and engaging performance, is an emerging talent on the scene.

An endearingly ramshackle performance (there was change of set order due to a misplaced capo) heavy on warmth and charm revealed the range of Roach‘s songwriting talent. Songs tackling existential subject matters such as time travel were brought to life by her soulful and evocative voice which soared high above the unabashedly lo-fi music.  Accompanied by a bass player and a kick-drum the music ranged from delicate finger picked electric guitar to something fuller and fuzzier.

Having released a debut EP in 2013, She Drew The Gun are on the radar of Skeleton Key Records and are looking to record a first long-player. Let’s hope they build on obvious potential.