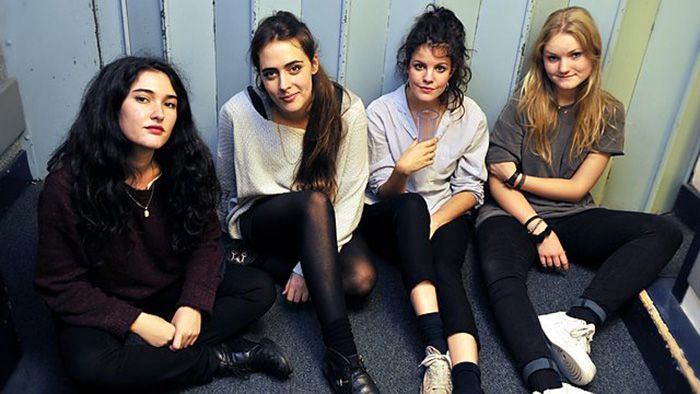 In her inaugral Singles Club, Getintothis’ Kate McCann plunges head-first into a world of squabbling samurais, arson and 1930s cartoons.

The female Spanish quartet of Hinds are cementing themselves as one of the best breakthrough acts this year, and have officially signed to acclaimed indie label Lucky Number Music.

Apparently they wrote this while drinking sangria on a Friday afternoon. Listening to this you can almost taste it.

Protocol has an almost psychedelic edge, peppered with a smart mix of drumming, synths beats and clashing cymbals from the outset, with an orchestral tinge and some seriously soulful vocals.

The track was produced by Brendan Lynch who’s notably produced Paul Weller, Primal Scream and Paul McCartney, and is out next month on Luv Luv Luv Records.

Kingdom Come is simply a powerhouse of an R&B/alternative-pop ballad, that starts sweetly and builds up to a strong and incredibly catchy chorus.

Damien has been championed by the likes of BBC 1XTRA and XFM in the past, and it’s no wonder why, as his vocals here are both deep and gripping.

HeCTA is a spanking new collaboration from members of Lampchop, enabling their more electronic side to shine through.

The Concept is electronic disco at its finest, containing samples from 1930s American comedian Buddy Hackett. The track seems to swing along, driven by shifting beats and juddering synths.

The video superbly pays homage to the black and white cartoons from the 1930s, showcasing the adventures of a man’s battle with slimming tablets.

Thundercat returns to Brainfeeder with his first solo material for 2 years. Them Changes drops us into classic 70s jazz funk with sombre yet enchanting vocals and a familiar sample from the Isley Brothers.

Words can’t describe the sheer joy I experienced watching the two samurai square off in the video.

Pretty Pimpin’ is taken from his 6th album out in September, B’lieve I’m Goin Down on Matador Records; one of the year’s most anticipated offerings.

The track is a smooth and accomplished offering, incorporating Vile’s usual melancholic musings and surreal lyrics, with some sublime guitar work.

In the video we see Vile jamming on his Fender as he attempts to get to grips with his confused sense of self.

Pray For Rain is a well-rounded tune from Portland’s new-age indie-pop outfit. The uptempo drumming, synths and guitars pulsate energetically throughout.
.
The track is about dual personalities and whether we all have them, which isn’t your usual topic of pop fare.

Chinese Finger Cuffs is a cracking little gem of a tune. The stuttering drums and crunchy guitar combination with spirited vocals from flame-haired singer Becca Parks. The USA punk trio’s tune is taken from their album Fuckin’ Flawless, released in January.

Its reverse-action revenge-fantasy video made me squeal with delight – the chilling tale of the girl that gets away, seeing off her abusive fella and burning the house down.

This is a truly infuriating trumpet-heavy track that gave me an instant headache.

Yes, Debbie we get it, you like to get high. A LOT.