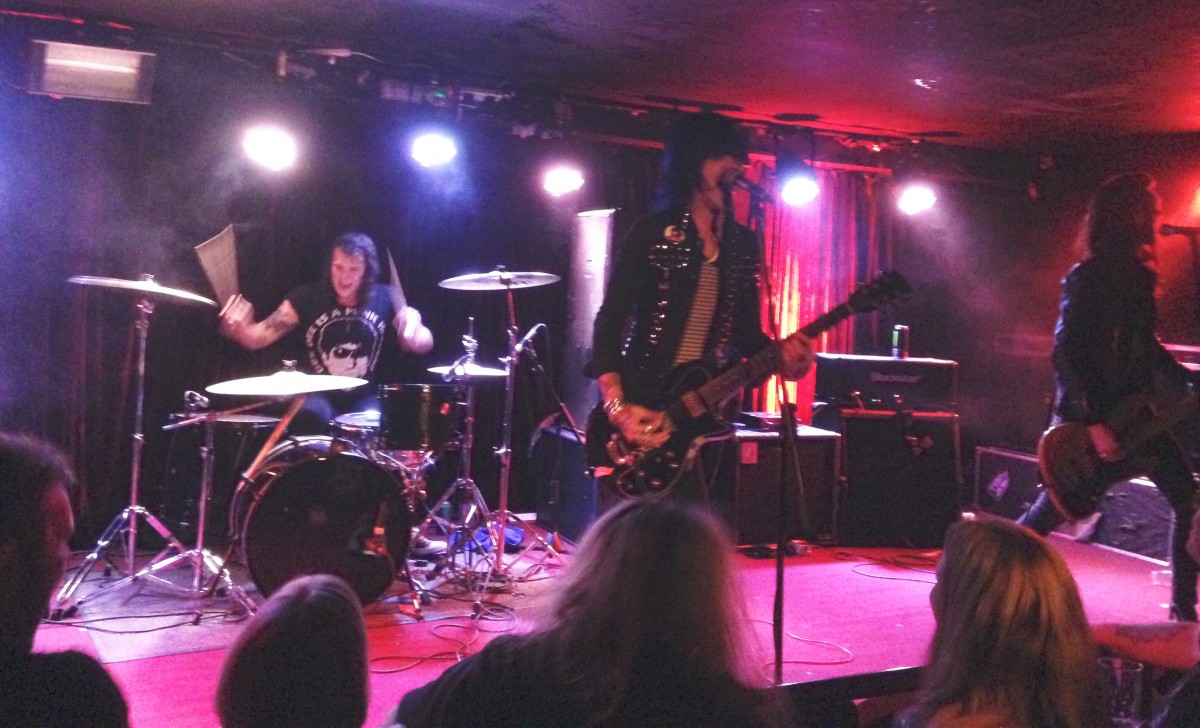 They may be over here promoting their debut full-length record Electric Blood, but Biters have been around and causing a stir for a good long while now, at least on their side of the Atlantic. Gone are the powerpop days of the early self-titled EP, when they sounded more like The Exploding Hearts playing Tom Petty than Cheap Trick playing AC/DC.

Now, you know exactly what you’re dealing with as soon as four feather-headed silhouettes slide on to the Ruby Lounge stage and kick into the opening refrain of Hallucination Generation, their single from 2013: “Hallucination generation / It’s mass hysteria / Living in a sanitarium.”

That pretty much lays the path out: you’re either in or you’re out.

New song 1975 is an early highlight; a song all about fast times, getting high and, yep, rockin’ and rollin’ all night. Singer Tuk Smith – hypodermic thin, questioning why people keep calling him Noel Fielding (answer: because he looks exactly like Noel Fielding) – preens, points and addresses every single person in the crowd individually, as if he’s checking that all eyes are on him. Of course they are, especially when he requests “all the strong men” to gather at the front so he can do a 360 flip into the crowd’s waiting arms. He kind of manages it, but inevitably ends up on his arse being helped to his feet by three blokes from Wigan and a lady who apparently looks like his auntie.

There’s no form of music more prone to cliché than chest-pumping, head-banging rock and roll, but there’s also no form of music – when done well – that’s more heart-stirring and pure to experience.

Debut single Hang Around is still as joyful as anything you could hope to hear from four men in skinny jeans and Converse. Tonight it’s played harder and faster than the recording, ending up like Strutter-era Kiss. Likewise the pure sugar pop of Melody For Lovers.

There’s really no reason why Biters aren’t huge. Guitarist Matt Gabs is a perfect foil for his singer – nonchalantly throwing out Van Halen licks. Drummer Joey O’Brien is brilliantly nonplussed, particularly during Tuk’s frequent – and honestly, overlong – story time sections. He spins tales of teenage meth and mayhem in small town Georgia, the cast of characters including Stepdaddy, Uncle Wayne and Uncle Trent. Even new bass player Phil – who seems to have stepped off the beach from Baywatch – has a good line in Wayne’s World quotes.

If the records can be accused of descending into Wyld Stallyns cheese, live is a different proposition. It’s too much fun, too well executed, too well written, and dives straight into the blood of anyone who’s ever looked longingly at a white Fender Strat.

They finish with a cover of Thin Lizzy’s Cowboy Song. A kick, a crash, and a wail: “A cowboy’s life is the life for me”.