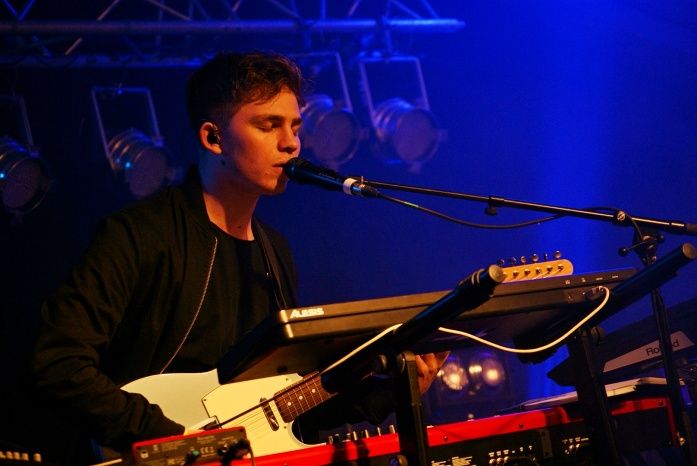 As Aquilo are set to head to the Shipping Forecast on Bonfire Night, Getintothis’ Luke Traynor expects fireworks from the Lake District duo.
Hailing from the Lake District surely gives bands like Aquilo an unfair advantage. Those statuesque lakes, verdant fields, imposing peaks…they all inevitably serve to urge creatively-beautiful leanings from the mind.
Aquilo are quietly building up a national fanbase since playing minor sets at Kendal Calling and Glastonbury in 2014.
Young proteges Tom Higham and Ben Fletcher have radically altered their musical preferences since rampaging through their erstwhile rock band careers in thrash and grunge respectively. All things considered, this move to down tempo, fragile electronica pop is extremely well received for us all.
Find out about upcoming gigs with our winter Gig Guide
I Don’t See It and Calling Me, for example, are slices of ethereal loveliness, soundscapes of melodic radiance – soft male falsetto set against stately and rich keyboard chord progressions, slaved over with a production which evokes the early career moves of a Sigur Ros.
Mount Kimbie and London Grammar have been cited as influences for these two Silverdale lads, with 6 Music DJ Mary Ann Hobbs an early champion of their ambient work.
Aquilo, finally thrust together after hearing each other’s work on the internet despite virtually living on the same street, have recently been submerged in house basements, moving towards the release of their first full length album.
For a preview, of sorts, ditch the fireworks this Bonfire Night, and let their wonderfully doleful melancholia, rather than overpriced pyrotechnics, expand your reflective compass.
Aquilo play The Shipping Forecast on November 5 – support comes from Pink Kink and Halem.