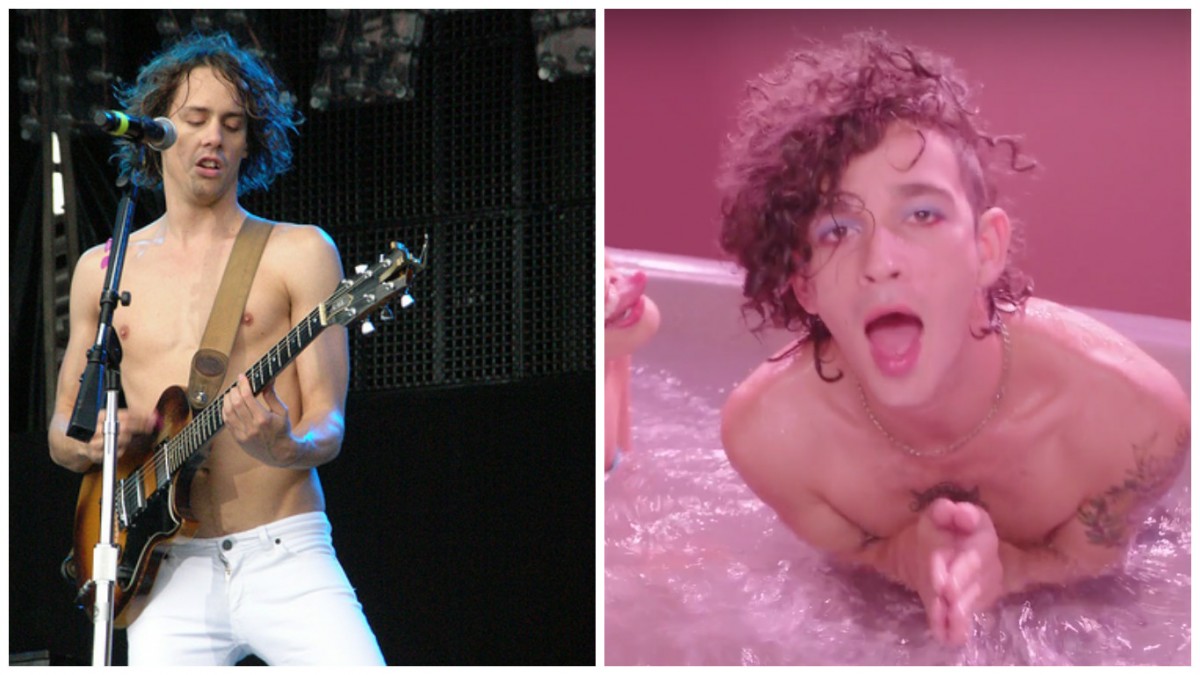 Johnny Borrell and Matt Healy get their tits out

As the rise of The 1975 continues, Getintothis’ Shaun Ponsonby feels a sense of déjà vu with front man Matt Healy.

Despite some well-known spiritual beliefs, scientific theory rejects the notion that déjà vu is any kind of precognition or prophecy, or that it’s a sign of reincarnation. For the most part, the scientific stance is that of an anomaly in one’s memory which creates the impression that the experience is being recalled.

This is why you can’t remember the apparently recalled experience. It probably didn’t happen. It is perfectly normal to experience déjà vu for that reason.

Like all scientific studies, there are exceptions to the rule. If it is prolonged, you may be experiencing mental health issues and hallucinations according to my doctor, Ernst Von Hindenburg, a pink elephant from Mars. Occasionally, though, I wonder if it could merely be that life moves in cycles.

As an example, let’s look at populist players of musical instruments and wearers of ripped skinny jeans, The 1975.

I can understand the success of The 1975. They’re radio friendly and their frontman’s dad was in Auf Wiedersehen, Pet. If that’s not a recipe for success, what is?

I actually don’t hate them. Matt Healy certainly knows a good hook when he hears it, and there’s something unique about his voice. They’re a pop band. Good luck to them. The only reason for me to despise them is the pretentious, self-fellating, obnoxious posing of Healy, who seems to be in constant awe of himself and how Christ-like and wonderful he is. Just take a look at the band’s videos, which are apparently storyboarded by Healy himself.

The Sound is a pretty decent pop song as far as I’m concerned, and extremely catchy. Not Earth shattering, more the kind of thing the BBC would use on a lot of adverts for their music coverage. The video kind of ruins it too. The 1975 perform on display in a glass box, which may or may not have been stolen from the set of ITV’s The Cube (and if that’s the case, I am going to go out on a limb and say that Denise Welch was his accomplice).

As they perform the song, people in underwear approach the box and point at them, and actual real-life criticisms aimed at the band flash on the screen. Before the end of the song, the situation reverses and the people who were pointing at the band are in the box and struggling to survive as the band watch.

The oh-so subtle moral of the story? Presumably, that internet meme-worthy old chestnut of “Instead of criticising someone else’s work, you should do something yourself.” Which is flawed.

Firstly, they put themselves on display in the box, so let’s not act like this is something that has been forced upon them. Ray Charles received a tremendous backlash when he started turning gospel music into popular records, which in turn led to the invention of soul music. It outraged people. He was labelled a blasphemer and spawn of Satan etc. He took heed of his mother’s words of wisdom; “No matter what you do in life, not everybody is going to like you.” He kept going, knowing he had an audience who loved him regardless and paid no attention to his critics. What he didn’t do was produce a piece of film that amounted to nothing more than a collective whine that not everybody likes you.

Secondly, there seems to be a presumption that the people criticising them aren’t doing what they want to do. As music writers, we are equally publishing our work and putting stuff out there for people to see. It might be a different kind of creativity, but it takes creativity all the same. One person uses a guitar, the other a laptop. You have just as much right to criticise the work of the writer as we do your music, but both parties would do well to remove the artificial stench of superiority. Not to mention that there is literally no way you can respond to your critics and not look like Baby Herman from Who Framed Roger Rabbit?

If they’re trying to “burn” music writers, there’s no use. Generally speaking, we’re already balding, beer gutted, miserable and destined to die alone in a mire of self-abuse and loathing. We’re dying inside already. So, there.

Their most recent video is for the song Somebody Else. It is probably the greatest manifestation of ego since Michael Jackson floated a statue of himself down the River Thames.

It starts with a dank, black and white living room set where Healy enters, immediately removes his shirt (obviously), and says something inaudible to his other half, whose face you never see and is presumably also Healy judging by the noodle hair. He washes his face, gets changed and leaves again. For just about every movement there is a half arsed laugh track applied. The whole thing feels uncomfortable, like Healy is about to go out and murder a kitten in cold blood because it blew off next to his Rose bed.

If you’ve got fuck all to do, why not read our Cosmic Slop archive? What do you mean “Cos it’s shit”?

Which would be fine, but for the fact that no matter how hard they try to portray themselves as angsty, The 1975’s music is mainly chirpy danceable pop, meaning this barely gels. It also goes on for a full three minutes before the song even starts.

During the song, he walks around and is a dick to everyone. He then finds that he is into Matt Healy from The 1975, and quite literally fucks himself before it is revealed that he is actually just masturbating alone in the back of his car. And, yes, you’ll be happy to hear that we get to see the look on his face as the crescendo of his self-love reaches its equivalent of the gong at the end of Bohemian Rhapsody. We see the expression on his face as his hand-to-gland combat erupts like a phallic volacano. We get to see his reaction as he elects the President. Basically, what I’m saying is, we see the facial expression he pulls as he ejaculates.

All in all, it’s probably the finest visual representation of his persona imaginable, especially seeing how the other band members are conspicuously absent.

Healy himself referred to the video as “surreal”, but it’s hardly David Lynch. “Indulgent” is the phrase I would use. And this is where the déjà vu comes in, because this is when I realised that Matt Healy is basically Johnny Borrell from Razorlight.

The parallels are enormous; both are fairly talented songwriters with an overstated sense of self-worth, have found themselves in a position where the band ostensibly becomes about them, have found success fairly quickly, are unbearably pretentious and, crucially, have an apparent need to get their tits out at every available opportunity.

I guess The 1975’s Sex would be their Golden Touch – an early single that garnered much attention and acclaim. Except it’s about sex. Which is fine. I like sex. Or at least I imagine I would. The Sound would probably be their equivalent of Razorlight’s America, a bona fide hit to take them into arenas.

I first realised the connection when Healy declared that “The world needs this album” in reference to their preposterously titled new record I like it when you sleep, for you are so beautiful yet so unaware of it (that isn’t bad grammar on my part, the title is stylised sans capital letters, like a subtle version of Slade’s misspellings). He has since made several similar remarks.

It seems he is starting down Borrell’s tried and trusted road of classic quotes like; “I’m the best songwriter of my generation,” and “I’m a genius. Musically, culturally, everything”.

I actually don’t have too much of a problem with people being full of themselves, if there is a sense of self-awareness about it. You need to have an ego to want to get up on stage in the first place. But when I see Johnny Borrell say “If I saw me I’d want to speak to me, too – I’d think, ‘That guy looks like he’s from Mars, he’s somehow strangely compelling,'” he just comes across as an arrogant arsehole because he doesn’t look like he has a sense of humour about himself.

That is the key of pulling it off. Muhammed Ali could say “I’m the greatest” and get away with it because he was an extroverted showman. He was compelling, charming, funny and had a twinkle in his eye (and could actually back it up scientifically). Johnny Borrell possesses none of these attributes, and neither does Matt Healy. They’re far too into themselves.

Healy doesn’t seem to be aware, telling The Guardian in 2013; “We’re not worried about becoming a bunch of wankers because the people who become wankers were always gonna become wankers. Johnny Borrell is a wanker because he’s a wanker, not because Razorlight got massive.”

It’s easy to forget how massive Razorlight were before Borrell’s solo album sold a whopping 600 copies. But they were at the very apex of the indie landfill, headlining Reading and embarking on arena tours that someone, somewhere might remember with fondness.

I guess Matt Healy could avoid Borell’s pitfalls. I mean, was Johnny Borrell’s dad in Auf Wiedesehen, Pet? No. And that’s the crucial difference here.

Azealia Banks appears to believe that literally everybody is plagiarising her. She will probably accuse me of plagiarising that sentence from her next.

I genuinely have no idea why everyone is banging on about Pokemon at the moment. Seriously no fucking clue whatsoever. Between that and Clinton running for office, I’m inclined to believe my time machine is fixed.

I am willing to bet ITV are preparing a gritty drama based on this year’s T In The Park as we speak.