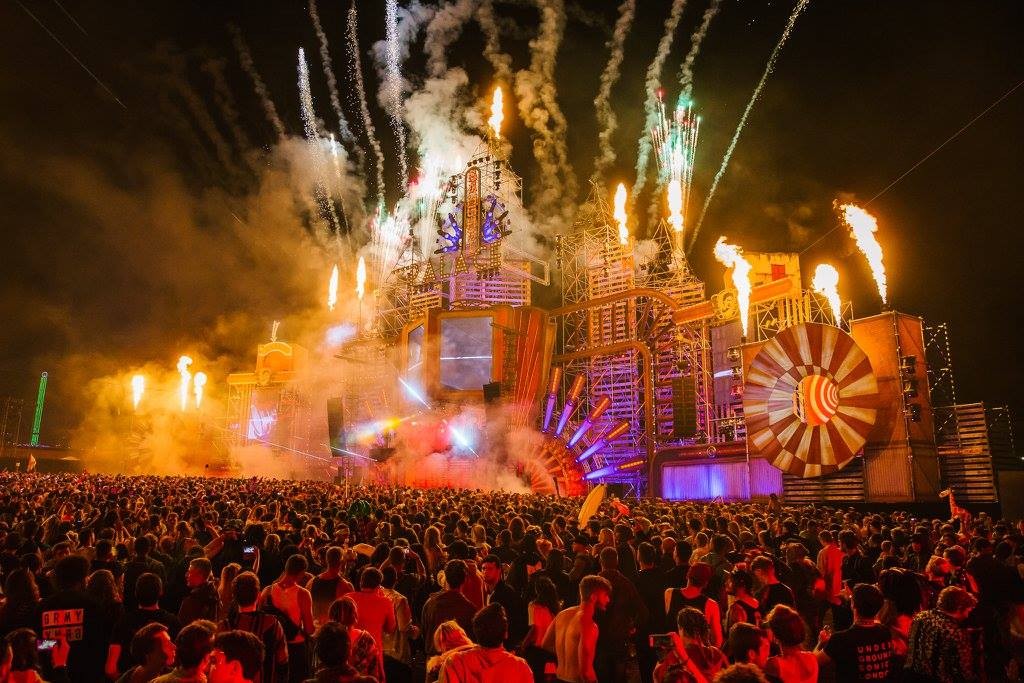 As the rain poured in our fair city, we headed south to find the sun shining at this year’s instalment of Boomtown Fair: Chapter 8 – The Revolution Starts Now.

This writer managed to find myself a last minute car share to the festival with a handful of complete strangers. It seemed I had already dipped my toe into part of the Boomtown ethos. It was a long drive but as soon as the tires hit the gravel path of the car park and the tips of circus tents started to peak over the perimeter fence, excitement set in. Vibrantly clad revellers take a minute to stretch before loading up and making their way to the gates.

We love that feeling a festival gives you; that constant smile, the spring in your step, the notion that you can completely escape your day to day life and leave all worries behind if only for one weekend.

This is a festival that raises the bar year after year and from the stories we were hearing, 2016 was going to be no different.

Once inside, we was met by a mountainous site carefully constructed into a labyrinth of elaborately built districts creating a fictitious town held together by Boomtown’s dystopian narrative.

Nothing feels ‘pop-up’ at all, each district looks as though it could be a permanent fixture. Every inch of the festival feels bespoke. On top of this, there are actors and actresses filling hanging from windows and balconies, lounging outside doors to beckon citizens into intimate trysts, and roaming the crowds to incite outlandish behaviour. It has all the active ingredients of a standard town, a bank, a prison, grandma’s house, a post office and a leisure centre, but with a big old Boomtown twist.

The woods are a key component to these five days of revelry. Between the districts and camping grounds are forests each equipped with a DJ tucked up into a treehouse. The smaller hidden stages like Wondering Word play host to rappers, beat poets and story tellers. Every door holds an invite to find a new an interesting performer with each district containing pockets of gypsy bars and hip hop battles.

On the organisational side of things, we found the capacity compared to the space and layout excellent, never once queueing, struggling to move through crowds or feeling claustrophobic. This is even despite the fact that the areas of Boomtown include amazing tight little streets lined with quirky shops and hidden venues; you can choose to lose yourself in these immersive little corridors but if you need to get from A to B on the sprawling site, they don’t become pinch points since there are plenty of different routes to take.

The festival’s wild and garish music policy, although extensive in breadth and scope – covering ska, folk, punk, reggae, bass, trance, swing and hip-hop – is secondary to the spectacle and immersive performances that have kept people returning to this festival for eight years. The shear amount of effort and planning that goes into creating Boomtowns anti-backstory is almost overwhelming and commend those who have had the pleasure of piecing it together.

Missed this summer’s festivals? We didn’t – check out all of our coverage here.

The latest edition to the festival saw the grand opening of a brand new district; Sector 6, which played host to a Deep Medi takeover with Mala, Gorgon Sound, Commodo, Gantz, Rider Shafique and Sun of Selah taking care of business. Again, the stage build was on another level and the sound system had the enough bass to shake an elephant.

The first headliners I caught were Madness, and they did what Madness do. No they’re not the next big thing or up and comers, but who cares? They had tens of thousands of people dancing and screaming at the top of their lungs, including myself. Some people will say they’re too cool for school to throw shapes to Madness, but not one person had a frown on their face throughout their set. They clashed with Leftfield, which we were slightly disappointed about, but luckily we had caught them a few months ago, so let ourselves indulge in a bit of silly Madness instead.

Damian Marley had a bit of a weird set, he seemed frustrated that not everyone in the crowd knew every song. When he would throw the mic in the air for people to sing along it was slightly embarrassing as people murmured and mumbled trying to get involved but as soon as he pulled out his father’s classics the crowd lost it, again, to his frustration which led him to leave the stage early giving his firework display the flop as it filled the air in silence.  Would Damian be as big an artist if his father hadn’t laid the ground works? Either way, he wasn’t a happy bunny, though the musicianship from his band was next level and his original tracks left me wanting to hear more.

The production and visuals that began Parov Stelar’s set filled the Town Centre with a theatrical atmosphere that had captured a huge crowd and started to suck in passers-by who seemed destined for Damian Marley and had been punched in the face with something a little more interesting. The ground rumbled underfoot as the set took off in the Town Centre and didn’t let up until the last note was hit.

We managed to wander into an intimate stage aptly named Wondering Words to catch the latter half of a set hosted by Adam & Koff, a freestyle arrangement with DJ and wordsmith both on top form. The tone in Adam’s voice was settling and his words, wise. A real diamond in the rough.

Mungo’s HIFI are a must see live act on this circuit. It’s like a big hug and a slap in the face. They hit a version of Clouds – Shallow that they had mixed up into a holy soup. The Joanna Newsom vocal sample soared through the natural amphitheatre and gave everyone an instant lift. With the sun beaming at its highest point it made for a perfect set.

Fat Freddy’s Drop are the epitome of old school cool and continue to embody their eclectic flavour of music, lyrics and beats. A fusion of reggae, mod, punk, funk and every kind of junk is thrown into the mix with multi-instrumentalist Hopepa stealing the show with his exuberance, zeal and musical talent. Other highlights included Joe Dukie’s vocals, solos from trumpeter Tony Chang, sensational saxophone arias from Chopper Reedz. Yet another sunshine ridden set of bliss, though we did question whether reggae is still reggae if the sun isn’t shining?

The Electric Swing Orchestra are a band that found there wings thanks to Boomtown playing a howler of a set in The Ballroom, not one foot remained on the floor as they smashed through a fun filled set late on a Sunday night. You’d not think for one second that we were all on our last legs.

With a strict rule in place that all live music must stop at Midnight on the Sunday, our weekend crawled into the early hours of Monday morning as an annual after-hours party began to form in the Hidden Woods where revellers took to converting anything and everything into a piece of percussion. It felt like organised chaos, a drum circle with no conductor which at times felt like a perfectly formed piece written specifically for that evening. It was perfect. We were in our element. We sat with our new friends in near complete silence, absorbing the sounds as they bounced from tree to tree.

All in all, Boomtown blows the roof off the majority of other festival in regards to aesthetic value. It’s an out and out experience, and our words will never describe the feeling created by attending this weekender. Check out the after video to get an eyeful, then grab yourself some tickets for next year’s showing Chapter 9 – Behind The Mask. You will not be disappointed.