With new album The Dear One out today, Getintothis‘ Peter Guy chats to Paul Fleming of Baltic Fleet about his sonic adventures, nineteenth century diaries and Tangerine Dream.

The wilderness. It kinda suits Baltic Fleet. They’ve never really belonged to anyone, anywhere or connected with a particular strand of scene or hype.

It suits them, and makes them all the more an intriguing proposition – isolationalists ploughing lone furrows, digging and unearthing dark, weighty magical musical precious metals. Yet, three years ago – the unlikely happened – they went from bedroom project born out of Widnes and the live Liverpool circuit to being thrust into the spotlight at Meltdown Festival playing at Yoko Ono‘s behest during her 80th birthday celebrations at London’s Southbank Centre. National radio spotlight, festivals and print press features followed. Superlative live happenings at the cream of the North West’s festivals also unfolded. It was all a little wild – and a little away from the safe haven of the wilderness.

But then came the wilderness once again. Transitioning from the industrial backdrop of 2012’s Towers, The Dear One’s psychedelic tinged electronic soundscape takes its cues from the Pennine hinterlands, inspired by the 19th century diaries of James Darlington, drawing upon influences including New Order, Talking Heads and Boards of Canada. It carries more weighty textures than it’s predecessor yet remains hugely melodic and is imbued with giant swathes of meaty electronica motifs and riffs. It is, it’s fair to say, a beast.

The album is once again out via Blow Up Records – and is released today, with Getintothis streaming the album in full below for your delectation.
To celebrate it’s release day, we caught up for a quick chat with GIT Award 2013 winner and Baltic Fleet main man Paul Fleming, to get the inside track on the new album’s recording, and where it sits in the current scene. 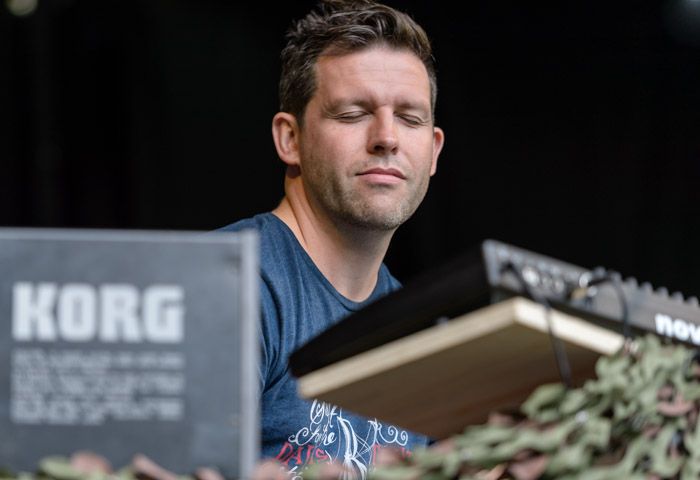 Getintothis: Paul Fleming! It’s been a long time. How have you been? Tell us all about the new album, we’re very excited.
Paul Fleming: I’m good thanks, it’s a pleasure to talk to you again. The new album is called The Dear One.
Getintothis: You’ve developed your sound considerably, there seems to be even more going on in the studio – tell us about how Baltic Fleet has evolved and what inspired you?
PF: It’s all been a bit of a natural evolution and I’ve gone with the flow. The friends that played live on the Towers shows stayed with me and I brought them into the recording process for this record. I moved away from the industrial surroundings to a place a bit more isolated and added more gear to the studio, synths, drum machines and effects. I developed the way I was arranging and producing just trying to move the sound forward.
The new landscape inspired me, I walked to the top of a hill one day, near Winter Hill where Doves recorded, at the top I could see my old town and the power station 30 miles away. I knew I had a link then and I set to work. I discovered some old diaries from the 1800s in a local church and that gave me some concepts and inspiration. I was picking up some vinyl and getting into things like Tangerine Dream, Harmonia and soundtracks, I discovered New Order‘s Movement after seeing Peter Hook play it in full in Liverpool, things started to come together then. We mastered two albums worth of material and probably had another one left unmixed, I’d not been in that position before.
Getintothis: Thematically were there issues, tales or emotions tied to the new album?

PF: In these diaries the author referred to his wife as ‘The Dear One’ throughout, for years. He wrote mainly about her and he diarised how he’d built a church, school, houses and he’d done it all for her.

I also lost my mum to a short battle with cancer as I was nearing the end of the record, it was tough for a while. When I came back to it I added more tracks including La Cygne, which was pretty much a live take and my most honest piece to date, very brittle and raw, my own electronic Nebraska. I started opening up some of the intros and outros to tracks, adding ambient passages reflecting my own emotions.

Getintothis: You really developed your live sound on each occasion we saw you; any new tricks planned plus any dates?

PF: Yes, we’ll be playing a few cities around release and maybe some festivals in 2017. We go into rehearsals soon and I have some ideas of how to progress the live sound.

Getintothis: Like many artists associated with the Liverpool scene, you’re more of an outsider and very much your own distinct artist; from the outside, how are we doing, what do you like and what do you think we as a city could improve upon? And in your travels, what’s impressed you in cultural terms?

PF: That’s difficult for me to answer as there’s so many diverse streams of activity going on. The eco system around music has really worked and the artists coming out of the region is testament to that. I would hope that culture and the arts are really embraced through the new devolution deal for the City, it’s our finest export and our lifeline.
On my travels, that’s difficult I loved places like São Paulo, Buenos Aires, Spain and New York I felt a freedom in those places, the shackles were off and the people were passionate, you could stumble upon amazing things 24/7.
Getintothis: Lastly we can’t leave without asking, as a former winner of The GIT Award, have you been following the prize’s progress and has there been any nominees or artists you particularly enjoy?

PF: I follow the award each year and I’m proud to have been a part of it. There’s too many artists for me to list here that I like and respect that have been nominated.

The Award made a big difference to Baltic Fleet and we were able to push the record even further as a result and it raised the profile hugely. I’m glad to see the Award grow year on year and I love the diversity.