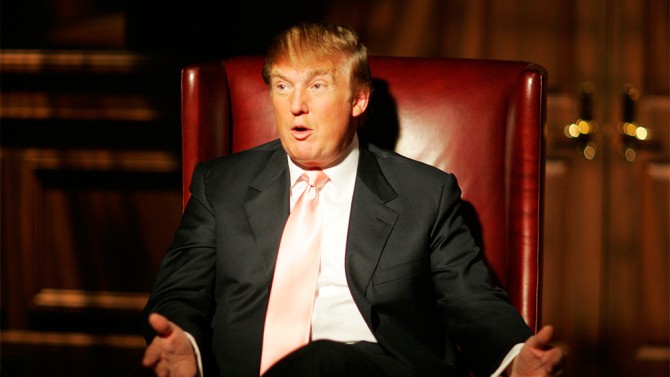 Donald Trump on NBC’s The Apprentice

As the abysmal American election reaches its conclusion, Getintothis’ Shaun Ponsonby suggests a reality TV show that can help politics build on Trumpageddon.

Eugh. Just eugh. As if Brexit wasn’t bad enough, now we have to contend with this shitty fucking American election. There have been uprisings against dictatorships that have been less bloody than this.

In the Red Corner, sexual predator, racist, dumb as fuck, psychotic pig Donald Trump. In the Blue Corner, careless, flip-flopping, establishment embodied, dodgy-is-putting-it-mild and is-she-really-about-anything-though? Hillary Clinton. A candidate the party wanted, but the members didn’t and a candidate the party didn’t want but the members did.

They are arguably the two most unpopular candidates in the history of American elections. Let’s be honest, they’re fucked either way. But, for me personally, if Trump wins it legitimises his hate speech. Not everybody who votes Trump is “ist”, but his win vindicates those who are. The way hate crimes have increased here post-Brexit, it will happen over there. There is nothing sadder than seeing the people turn on each other. I am all for an outside, rebellious candidate to shake things up. But not him. Not ever.

I wouldn’t even call him that radical a candidate. He is just as much a part of the establishment as Clinton, he is a privileged rich white dude who avoids paying tax and rips off workers. The fact that he brags about using the legal loopholes means he ain’t gonna close ‘em. Even if he wins, I am not convinced he will be President. Oh, he will have the title, but are people really expecting Trump to give up his business interests for four years? I can definitely envision him pawning everything off to some faceless Republicans.

Watching the debates, the constant feeling that crossed my mind was “How did it come to this?” Well, we all know how it came to this, but that still doesn’t cover for the shock of it. And it isn’t going to change. Trump was too good for ratings, and the more outrageous his claims and actions, the more he was featured. For all the media conspiracy talk, this is the real reason why Clinton’s Wikileaks scandal was hardly mentioned while Trump’s sexual harassment was splashed on front pages. It was juicier, and his reaction more entertaining. So, from the star of reality TV show The Apprentice, he became the star of probably the world’s biggest reality TV show; rolling news.

Let’s be honest, rolling news has turned world events into reality TV. They have got the selective storytelling creating lazy hate figures and this storyline is even going to end with a viewer vote at the end.

Then I wondered where this is could all be going. If ratings and website hits is what is now going to be governing the world, what is the ideal situation? It needs to combine celebrity, bitchy thin-skinned fights, incompetence and comedy. It has to be political, but also be frothy enough to make the front page of the Daily Star. Can the melting pot of politics and reality TV new heights? I say it can, nay, should. And this is how it happens; Celebrity By-Election (copyright: Shaun Ponsonby, 2016).

I haven’t mapped it out fully, but here is the basic premise: a handful of celebrities – for arguments sake, let’s say Les Dennis, Keith Chegwin, Julie Goodyear and Meat Loaf (because there is always an American that you assumed was too big for this shit, but was offered a wad of cash and they’re a total whore) – have to act as high ranking public figures.

They are all given their roles by a former Member of Parliament, let’s go for George Galloway, who acts as a de facto Prime Minister. Maybe Les Dennis is the culture secretary, maybe Meat Loaf is health minister, and there is lots of debate about whether the famously overweight Meat Loaf is the right image to go for with promoting health, and this in turn sparks a national debate about the broadcaster being insensitive to overweight people.

They carry out their duties through the week, and every Thursday night, there is a public vote – or By-Election, if you will – and Galloway decides upon one minister who hasn’t earned their place in his cabinet and they have to face the public vote in which they go up against another celebrity – Vanessa Feltz or Michelle McManus, just off the top of my head. They make it all professional and have David Dimbleby cover the results, with Andrew Neil occasionally entering to make the nation cringe by doing that thing where he sits there and pretends to be a potato. Channel 4 do a weekly Alternative Election Night, which is just the cast of Gogglebox watching the results and talking over it so you can’t hear what the hell is going on.

At some point, there is a scandal with one of the celebrities. there’s something nasty in Cheggers‘ past, be that accusations of sexual misconduct or expenses – he put his travel for work on a different TV show down as his expenses for this one. If there’s nothing there, we just make one up. They plead their innocence, but they are hauled in front of Judge Rinder, who has to decide whether or not they are innocent. This could even be fleshed out into a full-on spin-off (I haven’t decided yet).

But there is a major twist at the end of the series. Everything that happens – every law, every piece of legislature that is brought in, whatever Judge Rinder rules – is LEGALLY BINDING. It isn’t faked. Nobody is aware of it until after the fact, not the public, not the contestants. When the series ends, there’s a tense moment and a major twist is trailed all week, and then comes the truth bomb! Woah! Didn’t see that coming!

Les Dennis is bound to introduce something silly to get a few laughs, like he makes Jeremy Beadle’s birthday a national holiday, or let’s say Julie Goodyear makes wearing leopard print mandatory. Even if it was just done for a bit of a laugh, it is now enshrined in law, and they are directly to blame.

I think this is just crazy enough to work. It can’t be any worse than the system we have now, and frankly it’s probably the only way we can get most of society to engage with politics without resorting to xenophobia. Don’t even pretend that you wouldn’t watch this.

If anyone wants to take me up on this, contact Getintothis and we’ll sort out a meeting and take it from there. I would like creative control, because we’re covering new ground here and TV production companies are notoriously shit at handling new ideas.

In the meantime….America, our thoughts are with you.