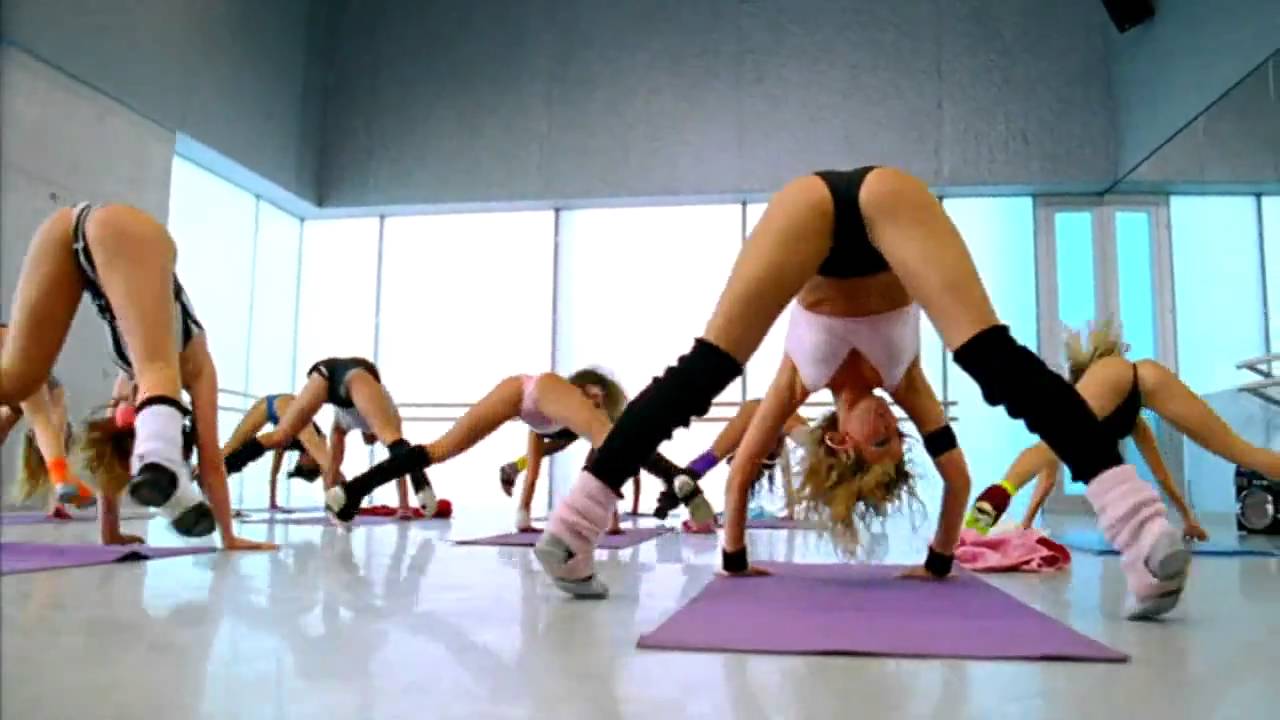 Eric Prydz’ Call on Me

Charting the emergence of the crotch shot in music videos, Getintothis’ Janaya Pickett ponders whether it advances the feminist cause and looks at its lasting impact on female body image.

So the year 2000 was, like, almost twenty years ago. I know, right? This writer had just turned sixteen when the clock struck midnight on the last day of 1999. I was babysitting with a friend who insisted No Scrubs by TLC would be the song to see us into the millennium and we celebrated by treating ourselves to a twenty pack of L&B silvers. Happy days.

Once everybody got over the hysteria of the millennium bug we began powering through the 21st century. And power we did! It was in the early 2000s that the downloading worm-can was truly opened and the infestation of the MP3 began. This manifested in the Metallica v Napster court case of 2000 and the release of the iPod in 2001. By the end of that decade over 200 million iPods had been sold and the way we listened to music transformed forever.

Elsewhere in popular music Robbie Williams signed a record breaking £80 million deal with EMI and Kylie Minogue revealed her perfect arse in the Spinning Around video (rated by The Independent as one of the Top 100 defining cultural moments of 2000-2010).

Lets just pause on that arse for a second.

Kylie by that point had been a pop star for almost two decades, but it wasn’t until the noughties that we sexualised her bottom so particularly. In hindsight we indulged in a lot of arse in the music videos of the noughties. For sure, there’s been titillating music videos as long as there’s been music videos, but after 2000 we became obsessed. The female crotch area was everywhere, eventually used as a battleground for feminist issues and the commodification of our natural urges.

Around the turn of the century, ex-Mickey Mouse Club kid and pop princess Christina Aguilera decided on a bit of rebranding and in 2002, the video for her single Dirrty sent media across the globe into a bit of a frenzy. In it Aguilera arrives at an oily warehouse rave-come-boxing event, on a motorbike in a leather bikini and arseless chaps. She then proceeds to get dirty, figuratively and literally alongside a cast of carnival type characters.

In interviews at the time Aguilera defended Dirrty saying that she felt exploring her sexuality was nothing to be ashamed of and that this is what the video is about. The female body, she says, shouldn’t be hidden. But let’s be real here, this move was first and foremost a PR stunt. The teeny-bopper-turned-bad-girl shtick is one of the oldest tricks in the showbiz book. By adding a little more raunch to her coming-of-age than her contemporaries, Aguilera successfully won the attention of the world’s media thereby garnering wealth and fame – that is the crux of the matter. Not women’s lib.

The star of Dirrty was really Aguilera‘s crotch. Every outfit that features, the cinematography and choreography are all centred around showcasing her vag and her arse. She pops squats, slutdrops and other stuff associated with stripping and sexual subcultures.The video was in fact a greater success than the single, which was her first to not enter into the Billboard Top 20, entering at 48.

By the mid 2000s crotch was increasingly common in music videos. Dance music videos in particular did very well out of the trend for FHM-style cooch. Indeed, just a few months before Dirrty hit our screens Benny Benassi released Satisfaction with an accompanying video starring two glamour models, a Playboy bunny and an escort. In it the scantily clad, oiled- up females lip sync to the song as they use power tools, their skin wobbling and gleaming.

By 2004 the crotch shot reached it’s stylised pinnacle in the form of Eric Prydz‘s, Call On Me. In this video the gloves and everything else came off. It’s unapologetically sexualised. A lone male (Prydz) manages to get himself into the raunchiest aerobics class on the planet. The ‘instructor’ wears a thong leotard and sweat bands as the camera gazes longingly at vag, then arse, then vag again; Pouting lips, spread legs and lots of thrusting. Again, the videos success at the time outshone that of the music itself.

And there was plenty more: In 2006 Fredde Le Grand brought out Put Your Hands 4 For Detroit. Then there was Alex Guadino‘s Destination Calabria and Ida Corr‘s Let Me Think About It in 2007 – all three videos feature a crotch shot within the first ten seconds (from the front or the back. Trust me, I’ve done my research). As the decade progressed the troupes of girls got larger and more nameless – like a merry band of sex dolls.

Speaking of dolls, it was in the noughties that The Pussycat Dolls emerged and would go on to become one of the biggest selling girl-groups of all time. But again the image was of flexible and sexually available women who revelled in their own hotness – at the expense of your girlfriend. As was the case with Aguilera, the smut was accompanied with contradictory ideas of empowerment.

Yet the PSD‘s most successful 2005 single Don’t Cha was written by a man, who samples another man and features a male rapper. The accompanying video was also directed by a man. It appears that the Dolls themselves are nothing but that – a gaggle of smooth limbs pleasing to the male and now female gaze.

That is not to downgrade the talent of these women as individuals as well as their right to flaunt their hotness but to expose the one dimensional take on ‘sexiness’ rampant during this period.

The same year as The Pussycat Dolls took the world by storm, feminist writer Ariel Levy released Female Chauvinist Pigs, an examination of ‘raunch culture’ at the turn of the 21st century. In it Levy argues that women increasingly embrace a version of their own sexuality – as propagated by mainstream media – that is essentially oppressive. Women buy into this hypersexualised culture under the guise of liberation, forgetting that “‘raunchy’ and ‘liberated’ are not synonyms“.

The troubling aspect of this rise in cosmetic genitoplasty is that much of its practice goes unregulated. Despite organisations such as the American Congress of Obstetricians and Gynecologists and The American Board of Obstetrics and Gynecology speaking out on the dangers of such surgeries, they continue to be the fastest growing cosmetic enhancements. Closer to home the NHS revealed that between 2004 and 2014 the number of genital cosmetic surgeries increased five-fold.

This trend, it’s explained, is a reflection of increasingly distorted ideas of what a normal or attractive lady-area should look like. Women are opting for these surgeries despite the fact they risk severe nerve damage and sexual dysfunction – “our interest is in the appearance of sexiness rather than the existence of sexual pleasure” – to quote Levy once more.

Anderson Paak, Malibu and the disturbing lack of female pleasure in modern pop

In an earlier statement the NHS reported that it performed more cosmetic genital surgery in 2006 that it had done in the entire period 2001 – 2004. It makes you wonder then how many, if any, women watched Call On Me in 2004 and said to themselves “That’s a perfect labia“. The point is that these ‘crotch shot’ videos were and are part of larger forces that commodify sexual expression and effect deeply how we view ourselves.

Mainstream female performers now more than ever espouse the belief that the use of their bodies is a form of feminism and empowerment. In a sense raunch culture throws a spanner in the works as surely the idea of freedom is also freedom to twerk in a PVC bikini if that’s what one wishes to do.

Contemporary pop icons such as Kim Kardashian, Miley Cyrus and Nicki Minaj claim, like Aguilera did, that they’ve a right to celebrate their sexuality how they see fit and they’re not wrong. But can we truly say that these deep obsessions with appearance and enhancement are fit? Is it healthy? And could you not argue that this in itself goes against ideas of self love and empowerment?

As in all situations, context is king but sadly the celebrity machine is dedicated first and foremost to wealth, endorsements, popularity – not feminist agendas. Somewhere down the line we forgot that capitalism and equality do not mix.

It’s true that since Female Chauvenist Pigs the feminist movement has enjoyed a resurgence thanks in part to new technologies. And from this we’re seeing increasingly layered explorations in the mainstream media of what it means to be female and sexual, but we’ve still some ways to go.

What has been re-established in recent years – that was missing for much of the noughties – is discussion and a new sense of sisterhood. Although there are many flaws in the idea of ‘raunch feminism’ – the feminism that we see emerging now is born out of it. Towards the end of the noughties this type of sexism had reached its zenith; The wound was exposed and now I’d like to think we’re learning how to treat it.