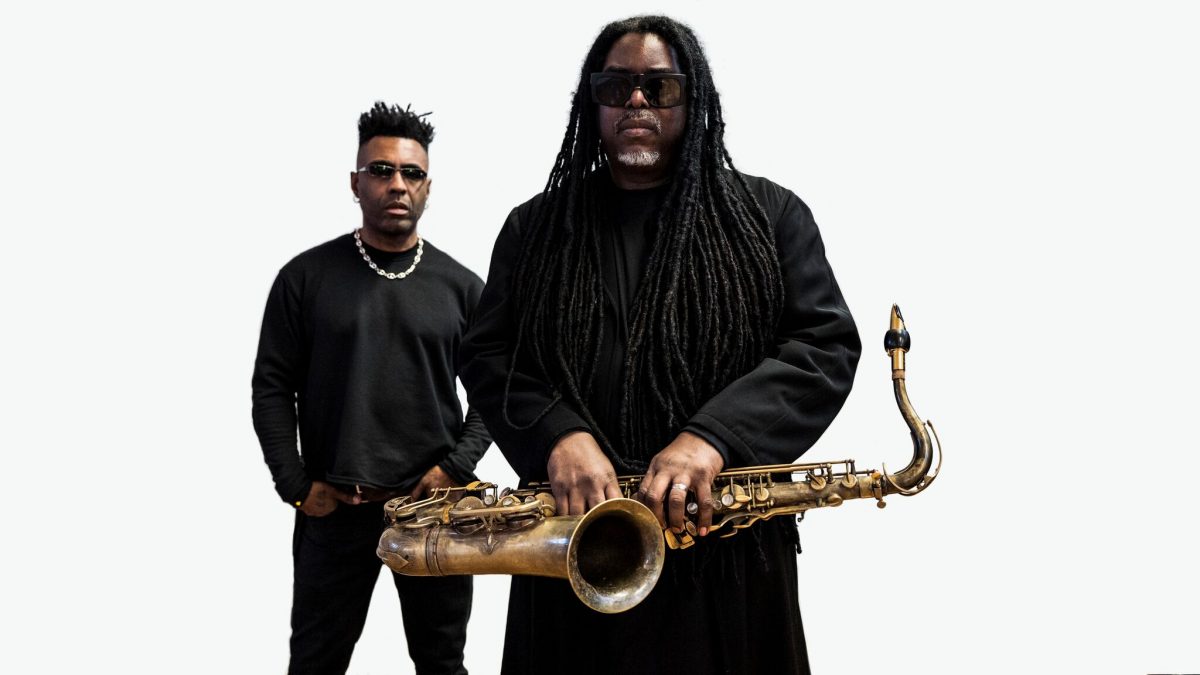 Courtney Pine likes Liverpool, we know because he said so. He likes the pizzas and the people, and with it being his birthday, he was overjoyed to be here, spending it with us.

Or so it seemed. Tonight was the strangest of nights, a strong start for sure.

Courtney and his band, were joined on stage for the first two songs by the Soulful Omar. Smooth vocals complemented Pine’s trademark complex patterns, alternating tonight between sax, bass flute and clarinet.

When Pine has guest vocalists he tends to let them take centre stage, but tonight he was ensuring that even on Omar’s spots he was finishing off with a lengthy, mind-bending solo.

With Omar gone, we’re in more familiar territory in as much as the performance style, material wise, the set was pretty much made up of new tunes from his upcoming album, Black Notes From The Deep . A must for any fan as this material is breath-taking.

A Change is Sure to Come is a mellow piece, played on bass flute that starts like a walk through Central Park on an autumn afternoon and ends with a run through a dark forest in the dead of night. Pine’s music really does take you to these places. The first half of the piece is incredibly reminiscent of Sunday Song from Pine’s debut album, Journey to the Urge Within, from way back in 1986. There are many moments tonight that recall his early work.

The Clarinet driven You know who you are is blissful and it becomes clear early in the set that Pine is happy to let his pianist Robert Mitchell and double bass player Vidal Montgomery take the lead in lengthy and mesmeric solos. Montgomery looks at Pine during his incredible solos with enlightened reverence.

The intro to There’s Nothing Like This brings Omar back to the stage to deliver his classic 1991 chart hit. Text book delivery with a gorgeous slow jam in the middle.

Another collaboration with Omar has the audience on their feet clapping and there’s a sense that at 55 minutes, we’re in gear and ready for a great night, but Pine suddenly breaks the news that he’s been up since 6AM, his hotel room wasn’t ready and the band have had a long journey so it’s time to go. Met with a deathly silence, Pine suggests that this is the point where the audience usually ask for more. Awks!

It’s a strange and disconcerting moment, particularly for the audience who have paid out a fair amount for a whole night’s entertainment. This is a guy who has over thirty year’s material at his disposal.

One final piece with Omar on vocals again, seems to be played begrudgingly at first but soon develops into a full-blown blast of trouble-funk soul and manic jazz. Pine is once again incredible but we all know the end is nigh and at just one hour and a quarter, the lights come on and Pine looks to the sound desk, shaking his head to suggest “no more”.

It was clear tonight that Pine was in bad shape, coughing throughout his solos and drinking copious amounts of water, but the too tired to play suggestions didn’t wash too well with a crowd who could clearly have sat through another hour.

Much grumbling is heard as we make our way onto Hope St. For quality, we doubt there is another jazz musician in Britain who can touch what Courtney Pine is capable of, but for quantity, we all felt a little short-changed.

We can only guess how many baby-sitters got caught smooching tonight.