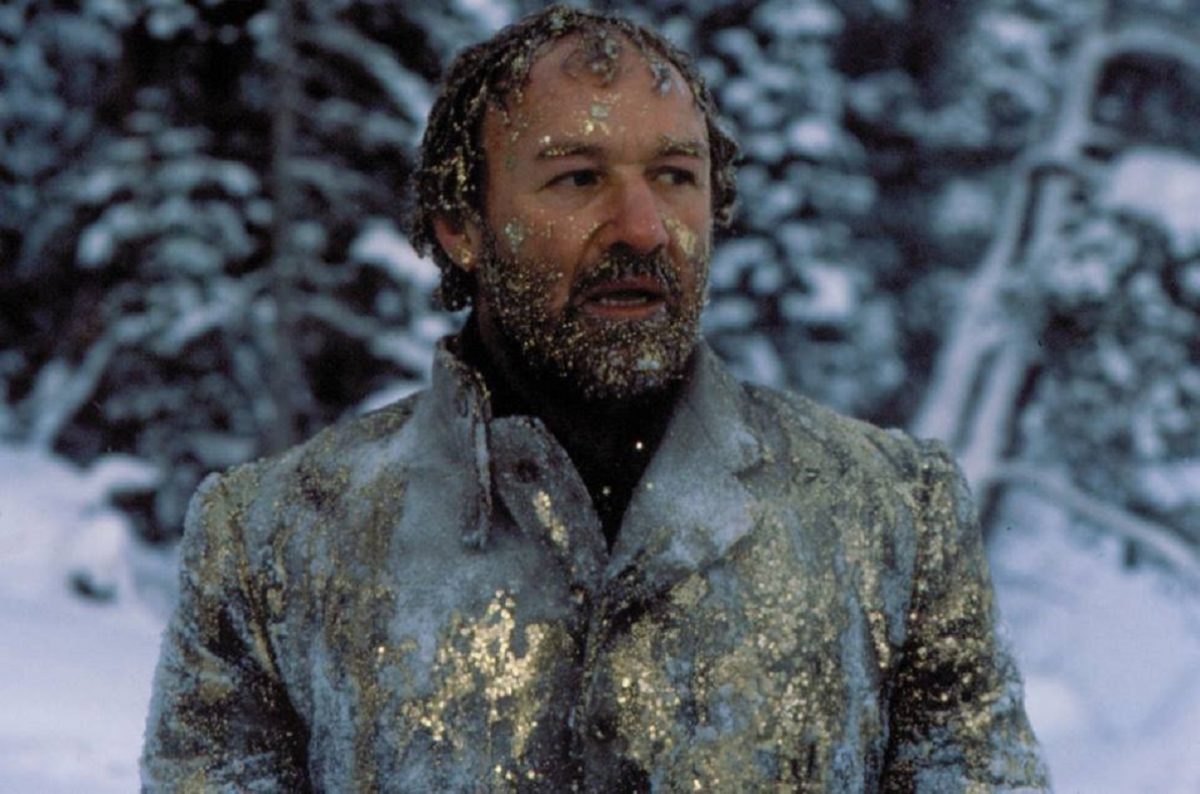 Nicolas Roeg is a director who always seemed most comfortable making movies that were awash with a lurid sexualised hue, an unflinching cinematic stare directly into the emotional abyss.

Perhaps this might be one reason why his career went awry after the turn of the 80s, an era where the unforgiving AIDs epidemic made sexually licentious behaviour seem almost, if not anachronistic, then certainly distasteful.

Whether it was cultural shifts, systemic changes to studio funding and development or simply the natural waning of a creative star which had once shone so fiercely, Roeg fell irretrievably out of favour. No matter.

Roeg remains a highly significant director in British and World Cinema for all sorts of reasons. During his 70s heyday, he was able to experiment with fractured narratives, vibrant cinematographic palettes, intuitive editing and woozy photography in ways which few other filmmakers could hope to match. More often than not, he also managed to take a diverse array of actors well outside their comfort zones in order to manufacture moments of filmic brilliance.

We, unlike perhaps the French or the Americans for example, do not have an exhaustive list of essential filmmakers in British cinema, not least because many of our true visionaries were forced out of the mainstream or abroad in order to further experiment with celluloid.

Our cinematic heritage (although there are notable exceptions) has so often been based squarely on ‘get-rich-quick’ economics, the crucible of our wartime experience, outdated social tropes and often extraordinary levels of misogyny, class prejudice and racial ignorance (intentional or otherwise).

The politics of identity, sexuality and relationships have rarely been interrogated more maturely or provocatively. Roeg challenged the existing norms and in doing so, revolutionised our cinematic language.

Gone were the days of prosaic, belligerent and hubristic cinema, cherishing a society (both past and present) that did not exist. Instead, Roeg anchored British film in the 70s in a murky swamp of moral ambiguity, alienation and fragmented worldviews.

These exercises in a new British cinema may not have always been easily understood, nor particularly palatable, but these jagged perspectives were far more true to our global, national and individual characters, flaws and all. Roeg was brutally honest about our darkest, most insidious impulses – if he appeared to luxuriate within them, it was only perhaps because he wanted to challenge us all to reflect on our most disturbing voyeuristic tendencies.

Even more striking, was Roeg’s dexterous ability to leap with sure feet between a dizzying array of genres, from the counter-culture psychedelia of Performance to the post-colonial narrative of Walkabout; unsettling us all with the neo-Gothic horrors of  Don’t Look Now while also forcing a deep reflection upon an era of senseless consumption with his sci-fi parable The Man Who Fell to Earth; the Nietzschean surrealism of Eureka through to the philosophical whimsy of Insignificance; and, of course, the twisted perversity of Bad Timing, a film which may well have killed any chance Roeg had (should he have sought it) of making it big in mainstream cinema. Roeg offered us all this and more.

We could go on but you would be better served by a some select recommendations. Thus, here are Getintothis’ top five three Nicolas Roeg films…

The film that made Nic Roeg’s name (and Donald Cammell’s for that matter).

The Summer of Love had turned sour and Performance was the bleak, surreal punchline for the era. At first glance, this depiction of a London heavy on the run (an incongruously cast James Fox), who takes improbable sanctuary with an isolated rock star (Jagger at his most charismatic) appears all too predictable.

Yet, nothing is as it seems and we are swiftly taken down a rabbit hole of psychological disintegration and splintered existence. Rarely had any filmmakers, before or since, shown such contempt for the narrative conventions of modern cinema. In that sense, amongst others, Performance was one of the most profoundly ambitious films in British cinematic history.

The kaleidoscopic imagery, an enigmatic plot that drifts in and out of a warped reality (multiple realities?) and a flamboyant, paradoxical finale all combine to leave the viewer suffering from something akin to artistic vertigo. It would only be fair to point out that this is as much Cammell’s triumph (co-director and writer) as it is Roeg’s, if not more so. Nonetheless, it is here that Roeg’s celluloid star began its blazing ascent.

In Walkabout, Roeg seems able to almost miraculously transpose the experience of clumsy white colonisation in Australia with the natural, instinctive culture of the native aboriginal people.

In the film, he details a white boy and girl’s struggle for survival in the Australian Outback, which becomes a rite of passage for them both. The trauma that leaves them stranded there (we won’t spoil it for you by revealing the nature of the incident) is symptomatic of Roeg’s baleful consideration upon the anachronism of white settlement in Australia, and elsewhere, presumably.

Indeed, white people and our ‘Western’ values appear increasingly at odds with the immediate environment, as reflected by the children’s floundering efforts before they are rescued from certain death by a local aboriginal boy.

The film reveals many moments of cultural incoherence, of tragic inability to communicate beyond established ethnic borders and the shameful philistinism of colonialism. The film is exquisitely photographed by Roeg himself and scored by the legendary John Barry.

The cast are resourceful and compelling, during what must have been an exhausting and challenging shoot. This is especially true of the charismatic David Gulpilil. Highly recommended.

Don’t Look Now is punctuated with iconic moments and boasts two leads who give the most intense (both physically and emotionally) performances of their illustrious careers.

In essence, this is a film that begins with heart-wrenching loss and becomes a gloomy, unsettling odyssey through the difficulties and dangers of grief. All of this introspection and crisis takes place amongst the claustrophobic waterways and crumbling architectural detritus of Venice, the beauty of which is transformed hideously by Roeg’s astute cinematic eye.

As to where such a bewildering journey will end, that is the frightening question which Roeg allows to unravel before the eyes of the uncomfortable viewer. Although it may be difficult to isolate exactly how Roeg crafts such an all-pervasive atmosphere of dread, his innovative use of camera angles, lighting and subdued colours are undoubtedly crucial to the film’s success.

Truly, this is a film that, once seen, is never forgotten.

Probably Roeg’s most divisive film, Bad Timing is a movie to be greatly admired, not least for the courage that Roeg displayed in making it!

It’s a film which is full of repellent characters, exploitative relationships subverted by sexualised power plays and a deeply distressing central narrative.

As such, it broke plenty of social taboos on release, leading to a mixed reception from both critics and public alike. That which further disconcerted audiences was the fact that the malevolent lead was played by Art Garfunkel, a popular singer who had been familiar in a much less morally ambiguous light.

Ironically, the limitations of Garfunkel’s acting nous actually contributed to the ambivalence of the central protagonist, something which greatly enhanced the central mystery at the heart of the film.

By 1983, Roeg was seen by some in the industry as damaged goods, or at the very least, a maverick who could not fully be trusted.

As a consequence, Eureka barely got a theatrical release and was lost in the vacuous sound and (tepid) fury of 80s cinema. This was a palpable injustice to both Roeg and the film.

In Eureka, we see Gene Hackman play an indefatigable prospector who strikes it rich but then, twenty years later, is enmeshed within a sinister web of conspiracy, the context of which may supersede mere criminal machination.

There’s a consistent thread throughout the film of cosmic fatalism, something which propels the central protagonist to engage in a doomed struggle with a world which he increasingly despises. This is a movie of epic proportions and flaws, most obviously found in the limitations of Theresa Russell’s performance and a final tranche of the movie which sits ill-at-ease with that which has preceded it.

Nevertheless, it is courageous, thematically complex and giddy in its creative impulsiveness. Put simply, even a partial failure from Nic Roeg is far superior to much of the cinematic output being churned out today.