As Liverpool’s World Heritage Site status remains under threat, Getintothis’ Janaya Pickett looks at the conflicting concerns of redevelopment and the forthcoming UNESCO seminars open to the public.

A World Hertiage Site is a place of universal significance, according to UNESCO (or The United Nations Educational, Scientific and Cultural Organisation), a branch of the United Nations that oversees the listed 1073 sites from across the globe.

Liverpool won it’s WHS status back in 2004 and the spaces awarded in particular include the central Dock area, the Pier Head, the museums and galleries along William Brown Street amongst others. As UNESCO puts it on their website:

“Liverpool – Maritime Mercantile City reflects the role of Liverpool as the supreme example of a commercial port at the time of Britain’s greatest global influence. Liverpool grew into a major commercial port in the 18th century, when it was also crucial for the organisation of the trans-Atlantic slave trade.

In the 19th century, Liverpool became a world mercantile centre for general cargo and mass European emigration to the New World. It had major significance on world trade as one of the principal ports of the British Commonwealth”.

It’s an award well deserved and I’m not just saying that as a Scouser (although I can’t deny bias).

As a city we’re known for our unusual pride in where we come from, ‘The People’s Republic of Liverpool’ some say. These days for most of us the reason for such pride is indescribable, intangible even. The pride just is what it is.

Its a collective consciousness passed down through generations or adopted by those living here; Those self-styled ‘adopted’ Scousers.

Yet in 2012 UNESCO placed Liverpool on its list of World Heritage Sites in danger of losing their much coveted title.

There has only ever been two site’s to lose their WHS status and the reason for Liverpool’s place on the danger list, UNESCO explained, is the rapid urbanisation seen in the city centre since 2004 – and how this and future building plans threaten to alter the significance of ‘Liverpool Mercantile Marine City’ as a historic gem.

Personally, I’ve lost count of the number of new apartment blocks and student digs being thrown up left and right in Liverpool’s city centre.

And many historic and cultural landmarks from across the city have already played victim to said urbanisation, despite consistent protest from heritage and conservation groups.

In redevelopment, it is not only the loss of historic structures that causes concern but the integrity too of those developing.

There are those that think that a sea of sky scraping apartment blocks and retail spaces do more to benefit international business men and women  than breathe life into fledgling cities.

On Wednesday October 1, 18 and November 1 respectively UNESCO representatives will descend on Liverpool for a series of seminars set up by Engage Liverpool CIC. Engage are one of the many social enterprises who put pressure on development groups such as Peel Land & Property (the organisation responsible for the potential multi-billion Liverpool Waters redevelopment plan) to retain a level of liveability and longevity to their planning as well as potential economic growth. 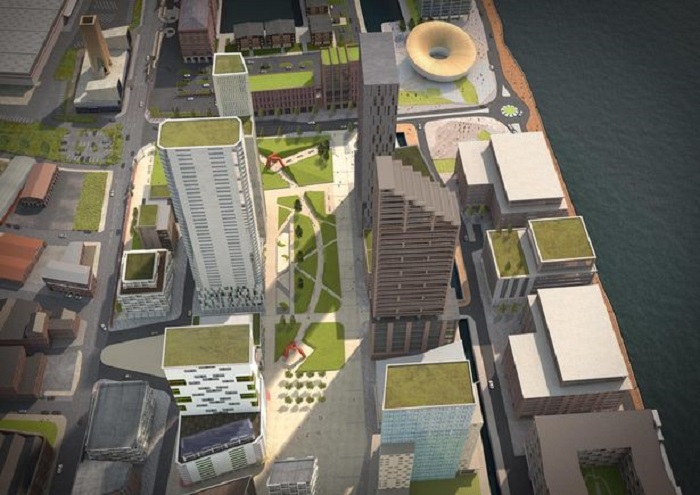 Liverpool Waters-new CGI of how it could look

UNESCO‘s chief of the Europe and North America Unit Isabelle Anatole-Gabriel will head the first seminar at Liverpool Town Hall with the discussion focusing what indeed World Heritage Status is all about.

In the second seminar UNESCO Chair in Urban Design and Conservation Studies at the Bezalel Academy of Arts and Design in Jerusalem Michael Turner will explore the conflict between UNESCO and other conservationist groups and notions of modern redevelopment.

The idea behind the three events is to give the local community the chance to hear the grievances of UNESCO as well as an opportunity to voice their own concerns on the future planning of their city. Representatives from the local heritage and cultural industries such as National Museums Liverpool, University of Liverpool and wider names like World Heritage UK will be also be take part in the discussions.

The series attempts to answer the overarchIng question of whether Liverpool’s World Heritage Status is worth fighting for.

Whether urbanisation essentially means the destruction of culturally significant relics.

Whether conservation means capping growth on prosperity in the name of nostalgia and whether there could ever be some compromise between the two.