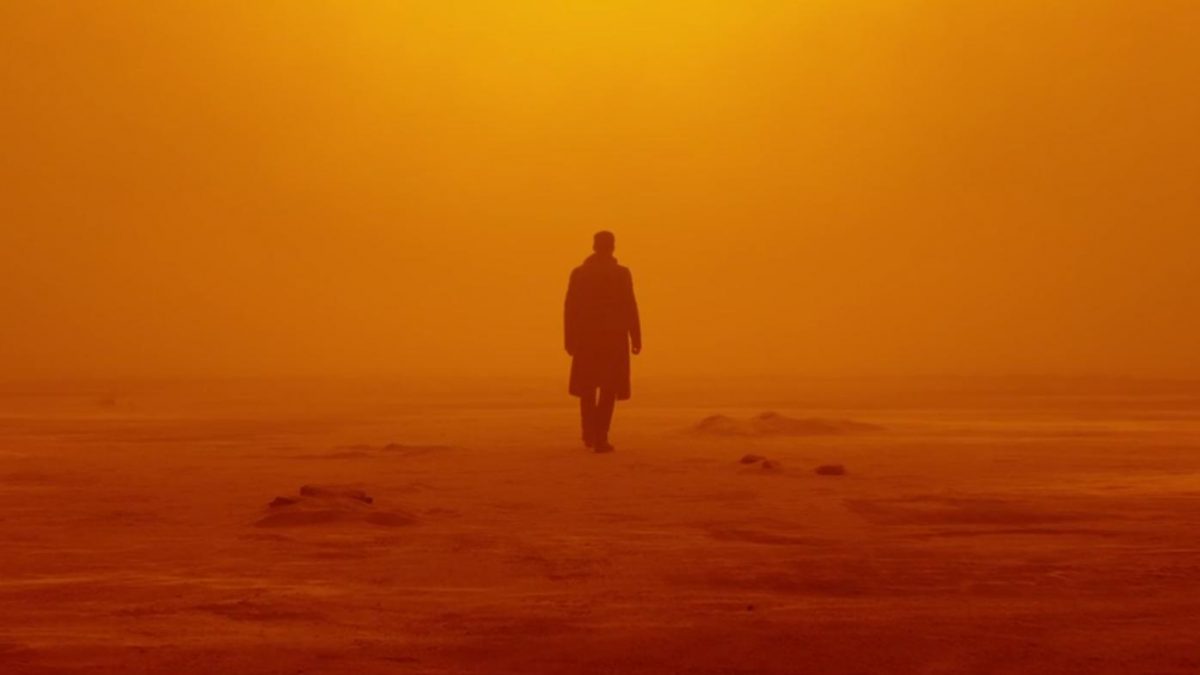 Blade Runner fan, Getintothis’ Michael Fowler, has hung around for many a year anticipating the newly released sequel, read on to see if it was worth the wait.

Denis Villeneuve had a warning for any journalists who might want to reveal plot points for his latest film, “Not a dickie bird on the plot front, reviewing scum, or I’ll be sending a blade runner to retire you.” (Paraphrased by Matthew Norman, Evening Standard). A harsh but pregnant warning because going into Blade Runner 2049 cold is such an overwhelmingly rewarding experience that I’d recommend you stop reading now and see it immediately. That in mind, we’ll proceed with caution.

Set thirty years after Ridley Scott’s original film, Los Angeles is an ever more densely populated dystopia of indistinguishable high rises and lurid neon advertisements, the scale of which is near unfathomable. We are also given glimpses at the wider reaches of the city, allowing for some of the most awe-striking landscapes ever created for film. The vision of Villeneuve to create such magnificent environments (they’re surely too massive to be called sets) is astounding, and the stunning cinematography of Roger Deakins to capture them is nothing short of jaw dropping.

It begins with a ‘DOOMPH’ and seat rattling, ‘VVWAAAAAAMPH’, that immediately immerses you into the film, the score by Hans Zimmer and Benjamin Wallfisch is another of 2049’s many triumphs, instilling panic and wonder, and elevating its onscreen images to greatness.

Ryan Gosling plays Agent K, an isolated LAPD blade runner whose task is to ‘retire’ Nexus 8 replicants- a PR friendly way of saying he kills factory recalled androids. A charming loner, K is a perfected character of Gosling’s that hints back to his work with Nicolas Winding Refn. K leads a pathetic existence, hated by the replicants he hunts and disrespected by the colleagues he works alongside, his only happiness is coming home to a holographic girlfriend, Joi, played by Ana de Armas.

The plot unfolds at a gleefully glacial pace, leaving time to question just where the hell the story is going next. In comparison to the cheap shocks and spoon feeding of a standard blockbuster 2049 never talks down to the audience and its revelations provoke thought that can take days to fully sink in.

By the time Harrison Ford finally arrives in the film he’s as dogged and grumbly as the Deckard we remember, perhaps more so as age and a hermit-like existence has turned him into an angry old man. Jared Leto gives a lesson in pure evil as Niander Wallace, a character that’s equal parts slave trader, God and Steve Jobs, whilst his android secretary Luv, a 21st century terminator played by Sylvia Hoeks, cooly enacts genocide whilst getting her nails done.

For all its grandiosity, 2049 bears a great deal of resemblance to Spike Jonze’s indie film Her, raising questions of the validity, or reality, of what love really is. Can love be considered real if one side is programmed entirely for that sole purpose? The earnest performances of de Armas and Gosling suggests that it can, but outside of the relationship Agent K is pitied for it and the computer programmed Joi is seen only as a tech product.

The commodification of women in Blade Runner 2049 is a troubling subject. Robin Wright’s commanding officer Lt. Joshi and Sylvia Hoeks’ terrifying and complex replicant Luv do represent female characters that are more than to be leered at, but the hundred foot advertisements of naked women, the female characters serving only as objects of male desire, and the sex scene, which is undoubtedly a cinematic innovation, initially left me wondering if it served audiences more than a wet dream.

It’s understandable to be concerned about the world Blade Runner 2049 creates. Consider the recent news of a sex robot that was broken after being repeatedly molested at a tech fair, and an online survey that found out 40% of heterosexual men would buy an AI sex robot in the next five years. Our 2017 and Blade Runner’s 2049 aren’t as far apart as we’d like to think. The misogyny that exists in 2049’s world is troubling but it’s supposed to be. It’s a warning of where we are headed.

In Blade Runner 2049 Villeneuve has created a near perfect blockbuster (the ending may have come a little easily for my liking) that could almost stand alone without its original, something that makes us question the inner workings of its world but also the very real concerns of our own. So what are you still reading about it for? Go and see it already.