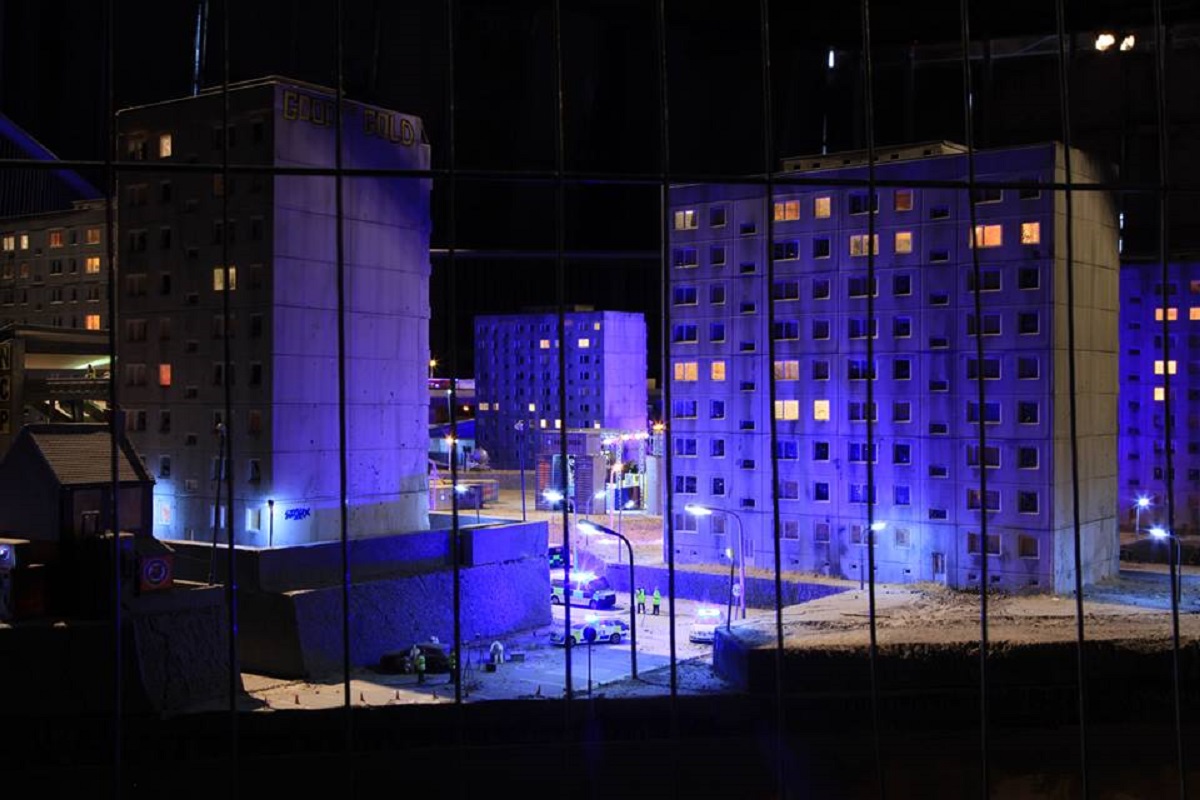 As The KLF’s latest event takes place in London, Getintothis’ Gary Aster updates us with exactly what Jimmy Cauty’s up to in Liverpool.

Last week, at various locations in our nation’s capital city, The Justified Ancients of Mu Mu (or Jams, for short) emerged from 3 months of relative quiet following their previous celebrated return staged here in Liverpool during the summer.

Like that occasion, this ‘situation’ also obliged a small group of ticket holders who were lucky enough to be pulled out of the proverbial hat to fulfil a series of tasks as “volunteers”, although this time events were free and condensed into a single (though doubtless memorable) evening.

We here at Getintothis were not among the very few ticket holders in attendance; a mere 99 tickets were allocated and the event, timed to coincide with the publication of the audiobook version of their new trilogy 2023, appears to have attracted very little media attention – an unusual state of affairs for the Jams for whom well-reported (even hyped) publicity stunts are par for the course.

Judging by the reaction of those in attendance on social media and the various online Jams / KLF groups however, it was another triumph of Discordian shenanigans, even if it passed by unremarked upon and even unnoticed by much of the media.

Entitled Burn the Shard Part 1 (with the expectation that Part 2 will be timed to coincide with the publication of the paperback version of their novel next year), the event drew upon and dramatized several moments from the book with the help of the ‘volunteers’.

It’s director Daisy Campbell’s voice which can be heard throughout the audiobook version of Drummond and Cauty’s new novel and the experimental theatrical aspect of their previous Liverpool ‘situation’ was given greater prominence this time, with a larger role for Daisy, daughter of Ken Campbell, whose radical adaptation of the Illuminatus trilogy has proved so inspirational to both Bill Drummond and Jimmy Cauty in different ways many years ago.

Bill Drummond, Echo & the Bunnymen: The Crystal Day in 1984

The influenceof the Illuminatus trilogy is evident too in a Jimmy Cauty’s ‘Aftermath Dislocation Principle’ (or A.D.P., an abbreviation we can all embrace) which takes its title from a phrase and notion first hinted at in ‘Illuminatus’ and found in Robert Anton Wilson’s Schrodinger’s Cat Trilogy, a bewildering tale with apocalyptic themes which describes several, divergent ends of the world.

Cauty’s A.D.P. is lately returned to Florence Hall in Toxteth, its now semi-permanent home, following an initial week-long visit there last summer as part of his ‘A.D.P. Riot Tour’.

This saw Cauty touring his A.D.P. sculpture / installation around the UK for most of last year, but off the beaten track of the usual arts centre and gallery circuit. Instead, the work was exhibited at various site-specific locations where it could be shown that a historic riot or civil disturbance had occurred.

The tour was a great success, calling in at 37 separate locations. It is estimated to have been seen by as many as a million visitors – far more than any other touring artwork last year, and appealing to a much more diverse audience than other comparable pieces of contemporary art.

But what exactly is it?

It has been described as a dystopian model village depicting a post-riot landscape, set in a mythical Bedfordshire town where only the police and media teams remain. It was first exhibited at Banksy’s Dismaland where it proved to be the biggest draw. Later it was exhibited beneath various railway arches. Then it was re-imagined as a touring piece and housed inside a 40-foot shipping container into which eye-hole sockets were strategically placed all around to allow viewers to glimpse each part of it in detail.

It draws together various strands and themes evident in Cauty’s previous work and can be seen as a companion to his earlier ‘Riot in a Jam Jar’ pieces. Apocalyptic themes have long been part of Cauty’s work, both individually and as one half of the Justified Ancients of Mu Mu. In the Illuminatus trilogy the fictional Justified Ancients were tasked with preventing the Illuminati from “immanentizing the eschaton” or bringing about the end of the world for example, and the pair’s own trilogy, ‘2023’, blends similar utopian and dystopian themes.

Even a cursory glance at the A.D.P. reveals that it is corporations that are the subject of the now vanished rioters’ destructive ire, just as they are they are the targets of much of the satire in ‘2023’. Once again this sits well with established ideas about the apocalypse.  The wealth, power and corruption of the Roman Empire is a recurring theme of the Book of Revelations for example.

The story of the sampler at 50: the instrument that changed music forever

Shipping containers too have also played a role in the continually unfolding story of the Jams. They have appeared prominently in several of Cauty’s much earlier ‘Stamps of Mass Destruction’.  And of course, the Jams/KLF master-tapes and all other associated ephemera remains stored in shipping containers at an unspecified facility somewhere near Sizewell B.

The model village itself also harks back to the band’s sizeable model railway structure featured prominently in the KLF’s Stadium House trilogy of videos. A nice touch for those who can spot it in the A.D.P. is the appearance of Ford Timelord, the car which used to belong to Cauty, fronted their first number one single and also featured in the KLF’s promo clips and photos. Here the vehicle appears in miniature (of course), in a state of disrepair and parked up beside several storage containers.

So what does it all mean?

Last year a terse Cauty told a seemingly unimpressed Guardian journalist “it doesn’t mean anything”, but this seems disingenuous and born of frustration on Cauty’s part. The piece is full of hidden meanings, puns, innuendo and jokes. It can be seen as part of a tradition in Western art depicting eschatological visions such as those found in the Book of Revelations.

One contemporary sculpture we might compare it with is the Chapman Brothers’ ‘Hell’ (which ironically was lost in a warehouse fire). Although much less grisly and disturbing than the Chapman Brothers’ piece, A.D.P. is of a similar scale, painstakingly detailed and allows the viewer a God’s eye perspective on events.

Like ‘Hell’, the A.D.P. is also populated only by a very few instantly recognisable uniformed figures. The walls of Cauty’s Bedford are daubed with graffiti declaring, amongst many other things, “abandon hope all ye who exit here”, an allusion to the words inscribed above the gates of Hell in Dante’s ‘Inferno’.

The absence of rioters, or indeed of anyone at all other than the police and media teams in the sculpture is interesting to note. This may be a further Biblical apocalyptic allusion, referring perhaps to the notion of a rapture when the righteous ascend from the earth while the damned are left behind.

The absence of rioters or any civilian population leaves only a bored and bewildered police force left to cause unrest, and some do so. We see certain officers looting, daubing graffiti on walls and relieving themselves amongst the ruins for example. Intriguingly, other model police figures appear to be aware that they are within a sculpture and peer out from the edge of the installation to the world outside, or into the eyes of onlookers peering through the eye-holes of the storage container.

The eye-holes are themselves interesting to note since they restrict our view and compel us to look more closely at certain scenes. They might be interpreted as providing the viewer with a God’s-eye perspective, but it might also be said that they give us the perspective of a CCTV camera. Cauty’s contemporary apocalypse is thoroughly modern and might be compared to Victorian painter John Martin’s The Last Judgement, depicting a train heading into a fiery abyss. In both works we find a clash between ancient symbols and the seemingly incongruous inclusion of contemporary technology.

The choice of Bedford as the setting for this post-apocalyptic landscape also bears scrutiny. A very specific and noteworthy site in Bedford was the final destination of last year’s UK A.D.P Riot Tour. Bedford has its own peculiar history of apocalyptic cults within its borders. It was home from 1919 until as recently as 2012 to the Panacea Society, a group which believed (amongst other things) that its shared communal garden was the site of the original Garden of Eden. The Society also believed that this same location would be the exact spot at which events heralding the end of the world would begin to unfold…

But for now, once more, the A.D.P. resides at Florence Hall.

Whilst here, the kind and decent folk at the Florrie are crowdfunding in order to take a group of young people from Liverpool 8 to accompany the A.D.P. to New York on the first leg of Jimmy Cauty’s A.D.P. Riot Tour across the USA. They will act as invigilators and official representatives of the A.D.P., speak to the media and conduct interviews.

While in New York they will also train the next group of young people who will take over their roles and accompany the A.D.P. to its next destination, and so on. Should you wish to help support this noble endeavour you can head over to:-

and make a donation.

Before it departs for New York in the New Year, we don’t merely encourage you to go and visit it – we urge you to!