Mac DeMarco played Liverpool and Getintothis’ Paul Fitzgerald went along to catch the simple, easy madness of it all.

It’s easy being Mac DeMarco. Pretty much all you’ve got to do is turn up and you’ve won.

And such was the slavish devotion in the room for this show, he had them in the palm of his hands while he was still backstage putting his Vans on and rolling up the legs of his jeans.

So from the minute he was introduced through a fug of red smoke ‘the man of the hour, 25% Italian and riddled with disease‘, this wall to wall sea of hands-high appreciators fell under his all too easy pop spell. And easy is the word.

The songs are easy, catchy as hell, easy on the ear, the arrangements simple but ridiculously effective. There’s very little ‘edge’ to the music as such, it won’t overthrow any governments, like, but sometimes just a bit of breezy, easy and effortlessly cool pop music will do.

He knows that. His band know that. And most importantly enough, the crowd at the Mountford Hall knew that. They came in adoration, and it was an absolute joy to behold.  And in these times, so ridden with sneering division and disharmony, what Mac DeMarco does is simply to unite people through his music. And that’s the edge.

Is it possible to determine exactly what are the best cities for live music?

The words, the guitar riffs, the string lines, and at one sublime and marvellous point, the drum beat. It didn’t matter. They savoured every single moment. DeMarco and his band delivered a set of killer win-win moments. Truly, everyone was a winner, for everyone in the room.

Listen to songs like the title track from the This Old Dog album and you wouldn’t believe he could hold a couple of thousand people through it in a live setting. You’d be wrong.

They held their voices high throughout, hanging on every line, rapturously swaying, arms around each other, together in the moment. Or that album’s opener, My Old Man, a pensive introspective observational shuffle of a song almost drowned in lightness, not, you’d think, best aimed at a sweating, heaving mass of revellers. Again, you’d be wrong.

The crowd loved them sneaking a couple of older songs in, and clearly high on the atmosphere, and loving being in Liverpool for the first time, the band revelled in them knowing songs like Ode To Viceroy from 2012’s 2 album. One of the crowd loved it so much, she bravely donated her bra to the stage, only for DeMarco to throw it back across the crowd to her. She caught it, and it felt like a victory for us all. The cheer reflected that.

The fuzzed out stoner pop of Rock n Roll, his recording debut, again from 2012, was a true highlight and pre-empted the moment where the mood stepped up a gear or three. Inspired by the crowd’s rendition of ‘Wooahh Jeremy Corbyn‘, DeMarco and his band threw themselves into an extended jam around Seven Nation Army to back up their loud and insistent chant. It was quite the moment. In fact, it was quite several moments.

There was a @jeremycorbyn chant at Mac DeMarco’s show in Liverpool tonight so Mac went along with it pic.twitter.com/qDH9MLGtIm

There was that unity again, writ large. (Older hacks such as this one  feel compelled at this point to urge those singing to not only chant it, but to think it, believe it, and most importantly, to vote it. The world is watching, literally).

The drummer, who we had previously been encouraged to believe was named Ernst from Berlin took the mic at the end of the set, while DeMarco relocated to the kit, for a little crowd surfing version of the Chilli Peppers‘ Under The Bridge, 50 Cent‘s In Da Club, and The La’s There She Goes.

The crowd at this point didn’t want to go home, and neither did the band. In fact, the party’s probably still going on somewhere. We hope so. They’re out there, smiling, and marvelling at their hero, Mac DeMarco, the man with the easiest job in showbiz, but a man who undoubtedly knows his art like few others do. We were reminded, as we left the venue, of Liverpool legend Bernie Connor‘s Sound Of Music podcast and its perfect strapline ‘We will never shy away from pop music’.  This is Liverpool. We couldn’t shy away even if we wanted to. And we don’t want to. Especially on nights like this.

Earlier on, we managed to beat the ridiculous queues at the front door to catch some of Montero‘s electric and attractive set. Another bunch of folk clearly loving what they’re doing, they also have that cool pop aesthetic, taking in the varied influences of West Coast folk to goth to The Beatles, and just about all points in between. 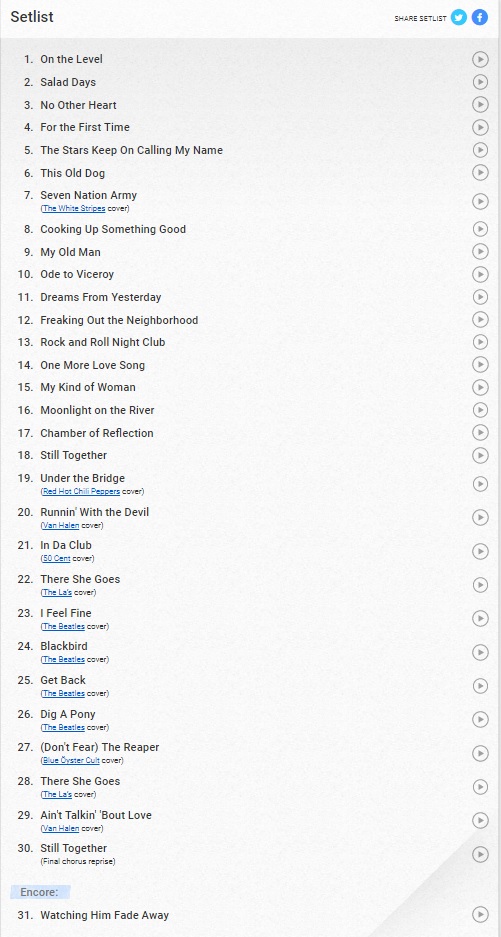