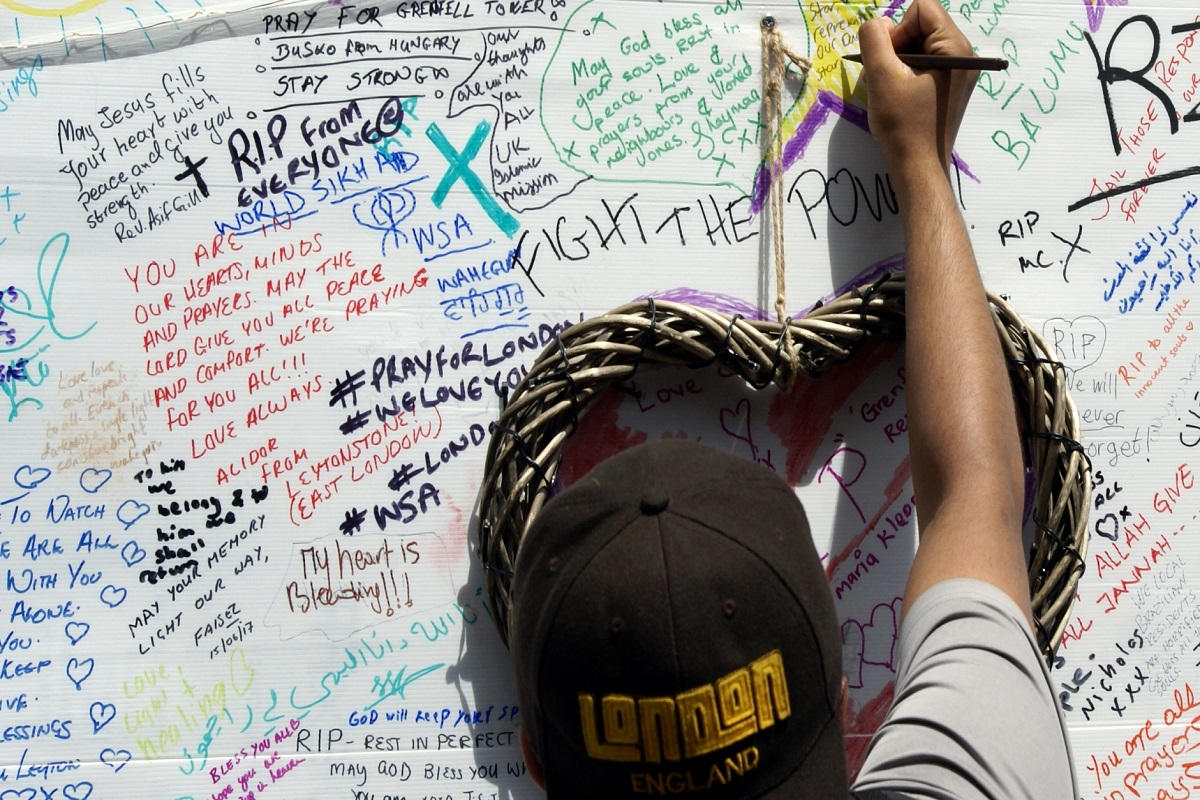 As we reach the end of 2017 Getintothis’ Jono Podmore asks us to tear oursleves away from our tinsel and fairy lights to reflect on the contempt our Government have for us.

You may be wrapping your prezzies and looking forward to a Baileys (etc.).

You may be wrapped up yourself, all cosy and warm in front of the fire, with a tree festooned with lights and tinsel in the corner.

But if you pay your tax, if you pay rent, if you use the NHS or public transport, if you claim any benefit, if you’re not a millionaire – it’s actually June 13th.

And you live in Grenfell Tower.

Although we had a general election that demonstrated a sea-change in British politics, and although the country has spent the year hurtling into the Brexit unknown, the fire at Grenfell Tower, slap bang in the middle of the year, is the defining event of the past 12 months.

Grenfell is just one of 4 blocks on the Lancaster West Estate. The residents of the other 3, Barandon Walk, Hurstway Walk and Testerton Walk, also suffered enormously due to the fire on the 14th June.

The low-rise blocks lead right up to the base of Grenfell Tower so they suffered water and smoke damage, and were bombarded with falling debris from the tower. These are all things that can be cleaned up and repaired relatively quickly. But what takes longer and perhaps will never be repaired is the impact of the trauma of seeing the homes of their neighbours incinerated with 71 people trapped inside.

The main entrance and also the fire escape for Testerton Walk is at the Grenfell Tower end of the block and so was sealed off and inaccessible after the fire. A few weeks later and elderly man in the block had a kitchen fire – routine and easily contained. But because the fire escape was sealed off, the traumatised residents had to evacuate their homes via another door down the hall – which meant walking through the smoke and towards the fire.

For many of these traumatised people that was the final straw. They simply left – preferring to leave their homes and their community rather than face the continuing horror of life on the estate after the fire.

So it’s quiet round there now. Not only are the residents of Grenfell Tower now either dead or living in temporary accommodation (hotels etc.) waiting to be rehoused, but also the other blocks are emptying out. The halls used to echo to the sound of kids playing almost continually. Teenagers would be sitting, chatting and cavorting in the kiddy’s playground between Testerton Walk and Hurstway Walk sometimes as late as 11 at night.

The inquiry has begun but could drag on for years although there have already been significant findings, such as the definitive death toll.

Aged between 84 years and a horrifying 6 months.

To help put the impact of their deaths into perspective, here’s a story courtesy of Mike Rogers:

A very wealthy family in China bought a large farm and built a beautiful palace upon it. They wished for good luck, health, and fortune, so they decided to ask a famous Zen priest to write a scroll for them to hang in their den. The priest accepted the job and went back to his temple to pray for enlightenment. After a few days, the priest returned with the finished scroll and the entire family gathered around in great anticipation to see the words that the priest wrote for them. The priest said a short prayer and opened the scroll and hung it on the wall. The scroll said:

The entire family was furious at the priest. They demanded that he go back to the temple and rewrite the scroll for them. As the priest was rolling up the scroll, he sighed and said: “I will rewrite the order of names on the scroll in anyway you wish. But I think there can be no other sequence. If all die in this order, I think that is true prosperity.”

For so many families on the Lancaster West estate that order has been torn apart by a catastrophe that was completely out of their hands. A trauma, which will live in their families for generations; the product of years of local council and Government policy. Policy that has incrementally undermined their safety and their rights, whilst all the while taking rent and council tax from them. 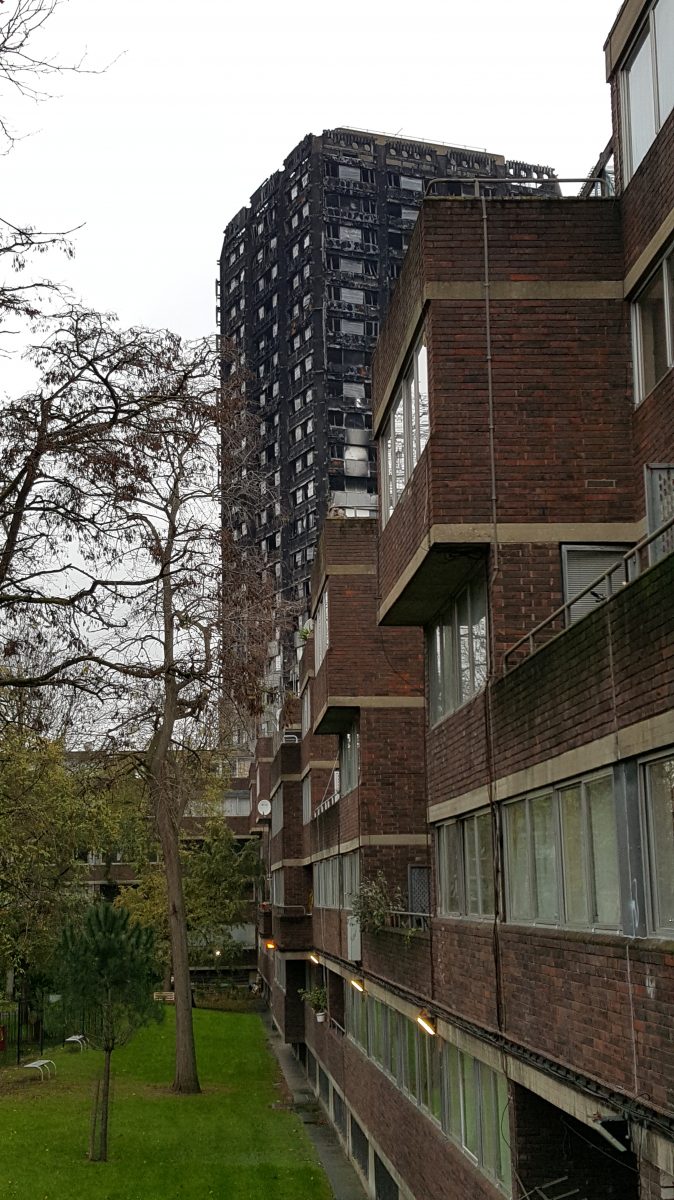 On the estate there are regular residents meetings, which are split into 2 halves.

In the first half a representative from Kensington and Chelsea Council is present, and then after he leaves the session becomes almost group therapy. There is grief, pain, confusion, fear, all sorts of emotions that need to be tackled, but greatest of these is anger. The Council rep has to soak this up week in and week out. Apparently he’s a nice guy, people trust him and he listens. It’s his job. But his employers are guilty of a wilful negligence that cost not only 70 people their lives but traumatised 100s of others, their families, their schools and the community.

The surviving residents are seething with anger that the Council conspired with Government to put so many innocent lives at risk in the name of greed. That the Council and the Government made people’s safety less of a priority than their own loathsome sycophancy to the perversely rich and selfish who are their benefactors.

That’s why the Council didn’t listen when the residents association told them year in and year out that the tower was unsafe and needed sprinklers. The Conservative council of Kensington and Chelsea – one of the few Tory controlled councils in London – have a set of priorities that takes little interest in the welfare of its tax and rent paying residents.

That’s why the response to the calamity of Grenfell Tower was so slow, incoherent and incompetent that neighbouring Labour councils had to step in to help the newly homeless and injured of Grenfell Tower and even lead operations at the site.

That’s why the Council clad the building in cosmetic panels and decided to save £2 per square metre and go for the combustible version.

In the Pit Festive special: the best images of 2017 by Getintothis’ photographers

It’s this very set of priorities, with its attendant greed and incompetence that is the driving force behind not just Kensington and Chelsea but also our national government.

Short term profit by selling off assets, cosmetic quick fixes rather than long term safe solutions, deregulation and the bonfire or red tape (a element behind the unfolding Brexit debacle), all enacted with jaw dropping incompetence derived from entitlement and ignorance.

These are the characteristics of Tory party administration.

Kensington and Chelsea may seem a long way away for you, wherever you are, but if you live in the UK you are living under the same administration.

Remember Priti Patel? The Tory international development secretary who was sacked for doing an unauthorised deal to give aid from British taxpayers to the Israeli army? Although her behaviour was typical of the current British government (think Liam Fox) she just got found out and has had to go.

So she has been replaced with Penny Mordaunt, who is now in charge of a £13bn annual budget. Penny, a hard line Brexiteer, has clawed her way in to this position via numerous posts such as Head of Foreign Press for George W. Bush’s presidential election campaign, and Director of Communications for… Kensington & Chelsea Council.

If you are in Britain, your bed tonight is as safe as these people thought theirs would be on the night of the 13th June. That is because your Government, despite their nationalistic drivel and jingoism, have little other than contempt for you.

In the Midlands earlier this year I was discussing the fire with some locals: how in London we were all somehow effected, how we were all only a few short steps removed from people directly hit by the catastrophe. But it seemed distant to people outside of London – something on the telly. Someone went as far as to voice surprise that it appeared that everyone who died, or who was involved, was black. I think the word they used was “ethnic”, which somehow distanced him even more from the tragedy.

Notting Hill has had a thriving black community since the 40’s.

Some of the first Caribbeans invited over to the UK to help with the reconstruction of the country after the war managed to get housing in the crumbling Georgian mansions of Notting Hill. These buildings are now split into multi-million pound luxury flats for the international elite and UK “old money”, so since the 80’s, the working people have been removed to cheaper housing in the borough, like the Lancaster West estate.

Today the residents are the great grandchildren of the initial immigrants. They are British citizens; taxpayers, working in all aspects of society. The colour of their skin denotes not only their increasingly distant origins and their (thankfully) vigorously maintained culture, but most of all their class.

If you are British, have a job, or have ever paid your full tax bill, you have more in common with the black people that died in the fire than you will ever have with the tiny and insanely wealthy tribe that control so much of our society – whatever the colour of their skin, or yours.

Merseyside music’s best new acts of 2017: Getintothis‘ new breed of the ones to watch

Britain is one of the richest nations in the history of humanity but many of its citizens can’t afford to eat or live in safety. This is a result of what has become under this government a war on the poor.

Class War was always perceived as being a war on the aristocracy and capitalists waged by the proletariat. Neo-liberalism has proven this assumption wrong; the rich shoring up their position with the aid of politicians and the media by denigrating the poor and eventually, as in the case of the fire in Grenfell Tower and with the cruel reductions in disability pensions, causing deaths in ever increasing numbers and homelessness reaching record figures of over 300,000. The ravages of class war.

So why are they still in power? Well hopefully by the time you read this, their grip on power will have loosened even further.

A minority government propped up by a tiny fanatical loyalist party from Northern Ireland, is now haphazardly pulling apart the cornerstones of Ulster’s stability. The pea-brained and incompetent Brexit negotiations, sawing off the branch they are sitting on, could be about to give us the biggest Christmas present of all – a general election.

If not called before Christmas it will be soon enough – the current situation is unsustainable and Theresa May is hemmed in by her own staggering inability and ineffectiveness. In the meantime this slice of Schadenfreude will have to suffice.

Time to get motivated again (as we did this year once already) to ensure that we cast this ridiculous and heartless government on to the ash-heap of history. The moment the general election is called we must agitate, educate and organise, using all the forces of democracy to make our homes and our society safe again before we become names on another unnecessary death roll ourselves.

Happy Christmas everyone and a wonderful New Year!