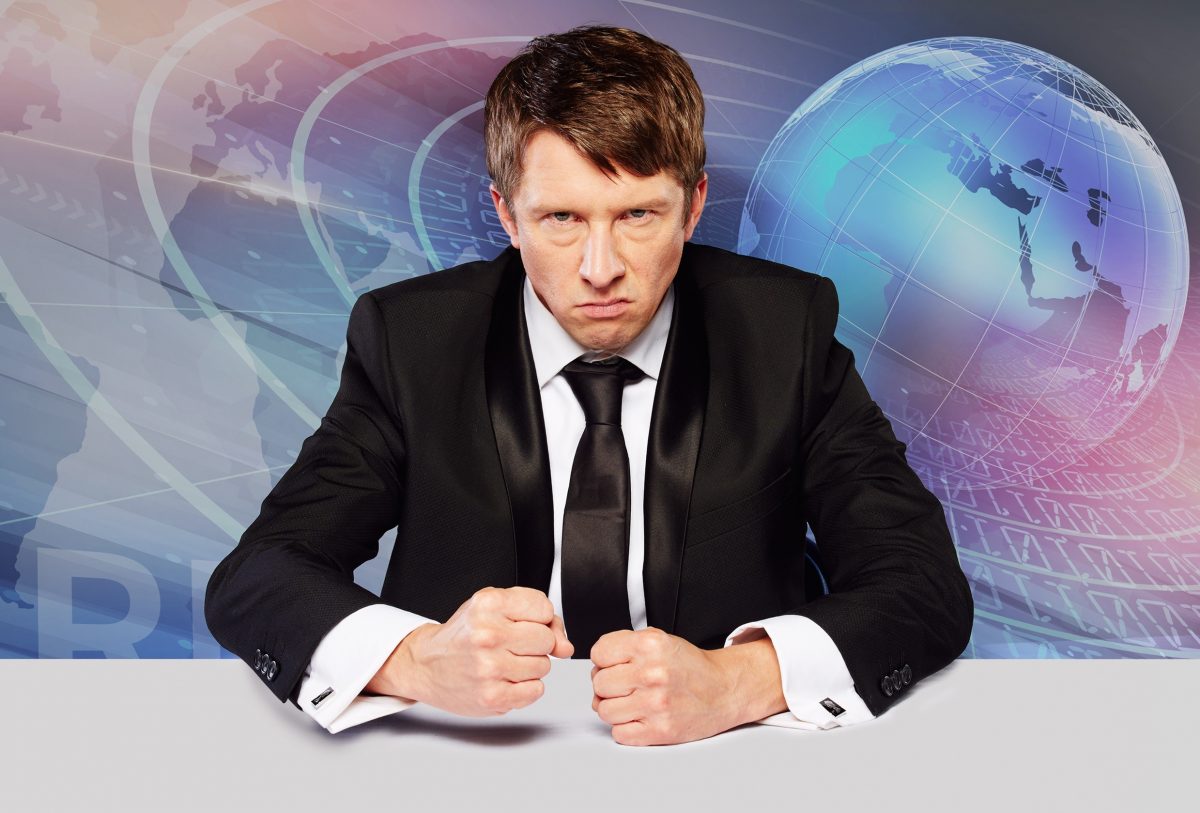 There is a school of thought that insists all that is needed for successful satire is an opinion and a reasonable vocabulary.

Tonight’s performance by Jonathan Pie at Liverpool’s Philharmonic Hall proves this to be wrong. What you also need is valid, considered points to make and impeccable timing. Pie may thinly mask these points by using an essentially comic character, but it is the need to make them that drives him.  The reason for Jonathan Pie’s existence is a furious anger at politicians the world over and the mess they create that we, the rest of the world, then have to live in.

Jonathan Pie is that most modern of phenomenon; the social media sensation. Played by Tom Walker, the Pie character is a TV news reporter who delivers polite and professional links to camera and explosive rants when the camera is ostensibly switched off. His regular shared YouTube videos have made him a star, consistently gathering enormous numbers of hits and shares across Facebook, Twitter and the like.

In this respect, Pie’s success is redolent of the Arctic Monkeys’ MySpace hype way back when, in that a skilful use of social media has built up a fan base in an under-the-radar kind of way.

The popularity of his posts has captured the public’s attention in a way that other satirists or comedians’ material simply wouldn’t. With bite sized rants served up on social media platforms, Jonathan Pie is the perfect modern comedian du jour for the age we live in.

One worry is that, although Pie’s rants are shocking and funny in short bursts of a few minutes while browsing Facebook, how would this translate to a full stand up show. The answer is that it translates very well.  Pie manages to sustain both the pace and the intensity of these short videos over the full hour of his stage show, without the energy or the engagement flagging at all.

Tonight’s show is, cleverly, supposed to be a pilot for a new TV show, The Jonathan Pie Political Report, which allows Pie to comment on whatever current issues are bugging him.

And that turns out to be pretty much everything, but with a definite left-wing slant.  Pie chooses his targets well but widely.  The expected targets such as Theresa May and Donald Trump are there, as they have to be, but Pie spends as much time attacking the worst aspects of left wing liberalism as he does the more obvious  and easy targets.

Particular ire is reserved for ‘Liberal people doing illiberal things in the name of liberality‘, as he sees the Left’s refusal to respect or even listen to views opposed to their own as damaging to the vital process of debate and discussion.  Behind every joke, every shock and every shout, there is a serious and heartfelt point being made.

While this obvious, laudable passion and commitment are key here, where Pie succeeds in stopping this becoming a one dimensional socialist broadcast is in the laser sharp focus of his anger.  As much as Jonathan Pie is meant to be a comic character at heart, his strength comes from laying out the cruelties and absurdities of the modern world in such a logical and heartfelt way it is hard to imagine anyone disagreeing with his thought process.

Throughout the show, he walks a very fine, very thin line between comedy and outrage.  But, thankfully, he manages to do this without losing sight of the comedy aspect of his show for too long.  Unlike, say, Frankie Boyle, who often seems happy to forget that he is meant to make people laugh rather than just waste time shocking them, Pie manages to keep his comedic safety net intact to catch him should he fall.

As an example of this, Pie looks at the ‘white straight male guilt’ that he feels the liberal classes would insist is his birthright.  He denies this guilt, saying that as a straight, white male he was not involved in starting either of the world wars, building the British Empire of being part of slavery as he was ‘only born in 1978‘.  He then goes on to say that the only people who were ever involved in the purchase of black people were 19th century planation owners and Madonna.

At this, there is a sharp intake of breath in the audience.   But then, crucially, this is followed by laughter.  There are plenty such moments in tonight’s show and Pie proves himself to be an adept walker of tightropes; this same material in other hands could easily come across wrong.  The skill is not just in the writing, but in the execution.

The most impressive thing about all this is how Pie/Walker remembers his lines.  This isn’t a typical comedy show where the intro/joke/payoff structure is key, this is pretty much one long diatribe.  That he never falters or lets the pace flag is a sign of great skill.

Pie responds to his audience in a similar way to Stewart Lee, who famously referred to the applause his own material generated as ‘the sound of the middle classes applauding their own guilt’. Pie berates people for voting in the likes of the Tories and Lib Dems and then reacts angrily to the laughter and applause that greets these outbursts, laying the blame for society’s monsters firmly at their feet.

The show’s conclusion features a clever twist, whereby an earlier comment about Andrew Marr goes viral, causing Pie to become a news story himself.  The ‘tweets’ are shown onscreen, including Mary Berry calling him a  ‘total wanker’. In the unfolding scandal it becomes apparent that the night’s pilot is now destined to never become the TV show that Pie yearns for.

As a result, the last part of the show is Pie undiluted, no longer held back by wanting to become a BBC political TV host.  It is, without question, some of the most intense and angry material I have ever witnessed.  Where the injustices of the world, its leaders and the opinions or complicity of  its inhabitants are put under a bright spotlight.  It as essential as it is uncomfortable to listen to.

But, perhaps, in a world controlled by the likes of the Tory party and Trump, we have become desensitised to scandal. Perhaps the modern world is one where openly immoral behaviour is no longer shocking, especially when filtered through a biased media. Perhaps we are now so immured to immoral and unaccountable behaviour that we no longer just put up with it, we expect it.

This is why Pie’s character not only exists, but thrives. In these times of short attention spans and an overload of scandal, maybe we need someone like Jonathan Pie to get angry for us and to remind us that what we see around us is actually not what should be normal or even acceptable.