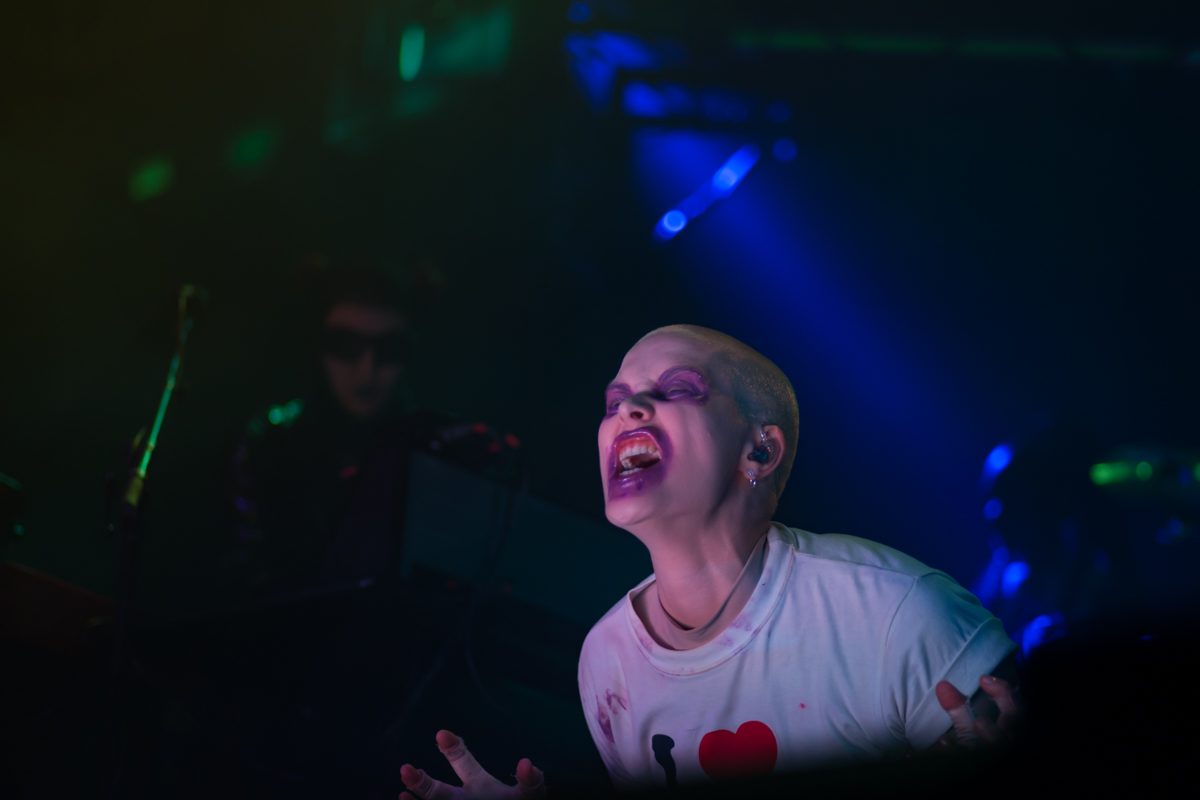 Fever Ray‘s not shy. Anyone accustomed to Karin Dreijer‘s solo work or that of Swedish electronic duo The Knife will be well aware of dramatic visual and provocative nature to her artistry.

However, her latest transformation is perhaps her boldest – and best – yet. Much has changed from her last tour of the UK when she fulfilled the role of gothic high priestess with ribbons of sprawling blonde hair amid what looked like dead vultures draped across her shoulders wrapped beneath Tolkien like middle earth garments.

Tonight, Fever Ray is reborn. In every sense. She resembles a bloodied, zombie like baby in oversized nappy drapes, skinheaded with afixed blackened eyes, purple-lipped perma-grin (or is it a scowl) and a t-shirt emblazoned with the words ‘I LOVE GIRLS‘.

This rebirth follows the break-up of her marriage, of which she overtly documented the birth and loneliness of motherhood on her 2009 debut eponymous album; lyrics of sitting by the TV, radio or dishwater were contrasted with harsh, foreboding and sinister musicality – something was simply not right.

Fast-forward to the present and she’s split with her husband and is now celebrating her queerness and singing about wanting to ‘run my fingers up your pussy‘. The lyrical and very real persona are tonight transformed with deliberate detail to every aspect of the music, choreography, costume and off stage detail (the toilets bear signs insisting ‘Fever Ray supports equal rights, all restrooms are trans friendly‘).

A giant neon pyramid like dancefloor is centre stage juxtaposing the beautiful surrounds of the Albert Hall as six strident women take their positions. Helena Gutarra is resplendent in orange-tan outrageously muscular body suit complete with bulging thighs and sted-induced biceps and fulfils the deeper vocal register while Maryam Nikandish, performing the higher vocals and alternating between guitar, accordion and keyboards, looks like she’s dropped straight off the set of Fifth Element.

The duo combine brilliantly with Dreijer for that distinctive otherworldly trance-like harmonies which has the power to unsettle and yet lull you into some kind of deep psychosis marrying perfectly with the trance-like music.

@feverray LOVED your signs about people lining up to let shorter people see, but unfortunately a lot of people hadn't got the memo. Loved your #Transfriendly toilet signage though ^_^ pic.twitter.com/jW85OTfdAw

But the shock element never descends into parody or overshadows the music – and it’s that which is the real triumph.

Much of the material comes from her 2017 album, Plunge. Opener An Itch sets the tone with its stabbing beats and rave erotica as she screams ‘Have you ever felt a sister? Imagine, touched by somebody who loves you…’ Wanna Sip collides heavy trance with Japanese koto rhythms as the stage oozes pink neon strobes while To The Moon and Back sends the revelers into delirium with its massive dance-floor filler grooves.

Yet it’s the tracks from her debut which remain her strongest material. When I Grow Up contains so much personal heartache aligned to a succession of Balearic beats it’s impossible not to be profoundly moved while If I Had A Heart remains a devilish slow grind which would not have seemed out of place on Massive Attack‘s Mezzanine. Better still is Concrete Walls as the three singers stand together and deliver over minimal orchestration a masterclass in vocal harmonics. It’s the stand out moment of the night. Minimal yet maximum results.

The understated triple guitar strum of Keep The Streets Empty For Me is a beautiful lullaby to finish on, but they’re soon back closer Mama’s Hand; all minimal popping blips and keening exuberance. 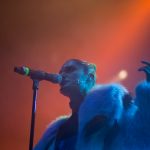 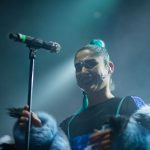 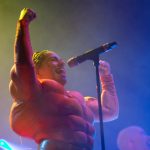 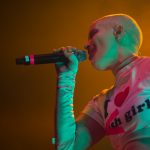 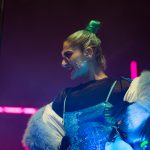 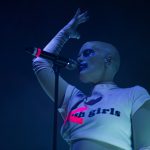 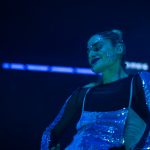 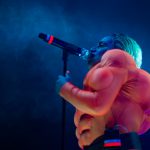 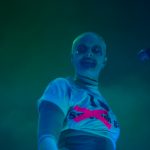 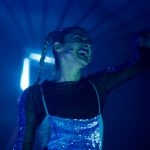 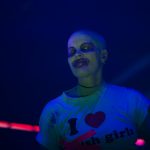 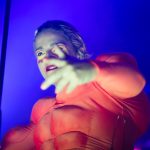 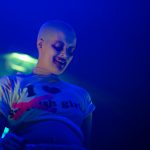 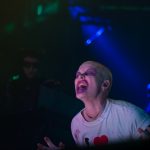