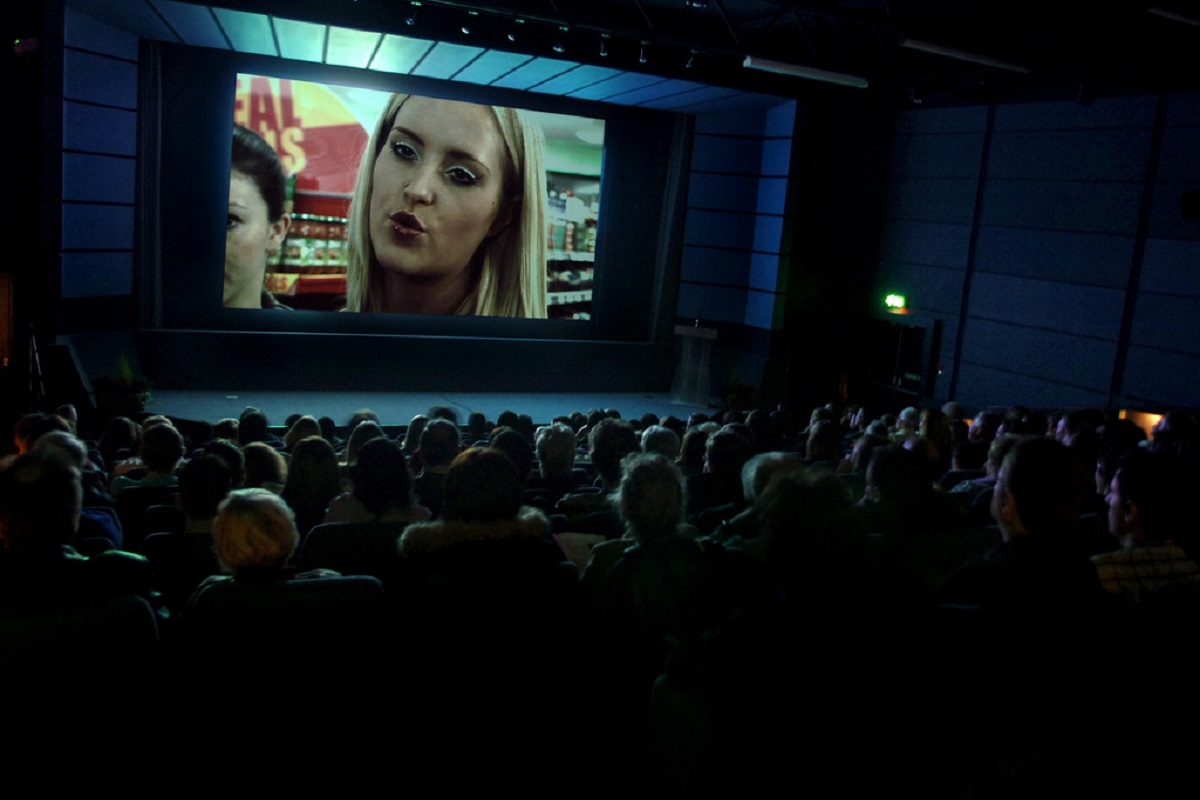 The best way to experience cinema?

With the rise of watching films away from the cinema Getintothis’ Chris Leathley asks whether our obsession with the ‘Big Screen’ is misguided.

In March, Cannes Film Festival announced with abrupt finality that no Netflix Original films would be considered for competition in 2018 (in the same announcement, they also banned selfies – make of that what you will…). In many ways the Cannes decision was yet another stage in a culture war that began with the advent of network television back in the 1950s.

For many, the small and big screen have been mutually exclusive mediums ever since then, although the bleed between the two has been sporadic and, at times, potent. Take Alfred Hitchcock’s forays into mystery segments on TV with Alfred Hitchcock Presents or David Lynch making the switch to television, at the height of his film career no less, with Twin Peaks.

Despite this, the shifts between the two formats and the work produced, has provoked more, not less controversy. Sight and Sound took some serious flak from cineastes when they selected Twin Peaks: The Return as their second best film of 2017. Netflix’s Okja was loudly booed at Cannes in 2017 (despite very positive reviews).

The budgets for showcase series on Netflix or Amazon Prime often dwarf some film productions and the creative freedoms currently being offered by these companies (alongside Showtime) are sending shockwaves through the industry. More crucially though, especially to those of us with a deep love of movies, Netflix and their competitors are now increasingly producing original film content in direct competition with traditional studios.

Aside from the opportunities presented by these new production houses, there is the extraordinary distribution network that both Netflix and Amazon Prime offer to films, some of which had already been rejected by the mainstream studio system (Alex Garland’s Annihilation being one such example). Thousands of cinemas are now being supplanted by millions of TV screens and laptops.

Distinctions have become messy and contradictory. The ‘Small Screen’ is no longer the home of original television alone, nor is it just a clearing house for movies that have long been in the public domain. The movie house is not the only place to watch new films any more.

Thus, rather than being an article about cinema versus television, this is an article about film versus film. The difference is the format – do we advocate the ‘Big Screen’ of the Picture House? Or the flat screen of our comfortable home entertainment system?

On a personal note, cinema has often been something of an enigma for me. Even when at an age (and in a situation) where free time and necessary funds were available, I did not attend my local cinema regularly. This was, and is, in spite of the fact that I am a film fanatic.

The medium (or rather media, given that celluloid and digital now exist side by side) has consistently engaged my attention in myriad ways and continues to have an intoxicating impact. And yet, even now, the cinema remains an infrequent venue for my film-watching experiences.

Today, perhaps, I have excuses. Kids. A job. Competing financial demands. A lack of willing companions! Nevertheless, I often muse (usually after complaining about how rarely I get to visit QFT Belfast) over what difference changed circumstances would make to my cinema going habits?

Not much, I suspect.

This puzzles me, for my shelves (groaning under the weight of collected Blu-rays and film tomes) are physical testament to my cinematic fascination. In many respects, it worries me too. After all, if an enthusiastic cinephile like myself isn’t rushing out on a weekly basis, what future for cinema?

Then again, are cinemas that crucial after all? In an age of Criterion, Eureka, BFI, Indicator and Arrow releases or subscription services that range from the ubiquitous (like Amazon Prime or Netflix) to the more niche (like Hulu or Mubi), more and more viewers are consuming their visual media at home.

This is the era of the ‘Small Screen’ – be it on TV, laptops, tablets or even mobile phones. Indeed, this breadth of accessibility has fundamentally re-shaped our digestion of popular media. On the face of it, that does not appear to be a bad thing. With new technologies, have come new audiences and new creative opportunities for filmmakers.

There are, as ever, two sides to the story and it remains ambiguous as to which perspective on film, and appropriate means of viewing, holds more credibility.

Nor are fierce debates about productive arenas for artistic interaction with audiences isolated to just film. Visual Art has perennially been at the epicentre of contested concepts of what art is and what it is not. The amorphous manifestations of the ‘novel’ are proof positive that invention and re-invention are part of what makes the Arts so captivating.

Besides which, personal prejudice, education, exposure and experience prohibit a ‘standardised’ view of art-forms, should we seek such a thing.

With that in mind, we should probably be wary of fixing on one acceptable format and method for interface with regards to cinema and film. Nonetheless, the premise of the article was an argument – what are the positives of both formats then? And need they cancel each other out?

For one thing, the advent of the ‘Small Screen’ has had a profoundly democratising effect on film viewing everywhere. If you don’t live near an Arthouse cinema, you are still going to be able to watch the latest niche releases. Films that languished in obscurity for decades are now enjoying a renaissance that would have been impossible in the past. World cinema in particular has benefited from this shift.

The sheer number of films being watched has increased exponentially as a result. We can watch at home or on the go, in bed or with our friends in the lounge. As such, our cinematic knowledge and understanding has been enhanced. The more we are able to see, the more we are able to comprehend the medium.

Moreover, with each Blu-ray viewed or film streamed, there are bountiful extras. Documentaries about the production process, interviews with the key protagonists, short films which reveal much about the gestation period of the main feature and so on. Instead of leaving a cinema dazed, and perhaps flummoxed, we can now immediately engage in a deep dissection of the film and seek to learn beyond a superficial viewing experience.

Add to that, the fact that you can watch and re-watch a Blu-ray with ease, and you have potentially very intensive reflection and engagement taking place. As a result, the new focus on home entertainment is educating whole generations of film viewers in ways that, outside of film schools, would have been closed to all but the lucky few.

Improvements in home entertainment kit, has now made the watching of films outside the cinema a much more stimulating process. Sound and HD enhancements have eroded the ‘quality’ gap that once existed between TV and Cinema. The predominance of the digital format has aided and abetted this process. When the vast majority of films are made in this way, why bother with the cavernous cinema?

In fact, the emergence of the digital medium has not only democratised film viewing, it has democratised filmmaking. Sean Baker’s ground-breaking Tangerine (filmed entirely on iPhone 5s) is just one example of this modern, streamlined filmmaking process. Just as the production of films has altered in distinctive ways, so must our viewing habits.

Finally, let’s not over-romanticise the cinema-going experience. Chattering teens, smartphones shining out, popcorn being flung in various directions and so on and so forth – going to watch a movie with the rest of humanity can be a desperately depressing experience. At home, you set the environment to suit your mood and film. How can the ‘Big Screen’ compete with that?

There are still, even in this age of technological marvels, many reasons for visiting the cinema. Try replicating the sound and vision of the ‘Big Screen’ in your home and you will invariably be disappointed unless you have a gargantuan budget. Cinemas have upped the game with regards to audio-visual presentation and filmmakers are on record many times as stating that their finest efforts are constructed with the ‘Big Screen’ exclusively in mind.

Furthermore, who could argue with the idea that the intricate compositions of some of our greatest directors could only be fully appreciated upon the cinema screen? The size and scope of the canvas allows us to access multiple nuances and subtleties that would otherwise be lost. Try looking at the Mona Lisa on your mobile and then see it in the Louvre – the difference is huge. Film is no different.

Indeed, if one considers celluloid specifically (and not the more predominant digital format), the big screen is the natural home of film. You cannot physically watch celluloid film in your home unless you are that rare individual who owns a projector and reels of your favourite movies. Cinemas are the only remaining repositories of the skills and equipment needed for projecting film for audiences to enjoy. With celluloid, one perceives a texture and a tactile nature that belies the two-dimensional image on the screen.

The effects, the craft and even the abrasions, of film are all part of the unique cinema-going experience. Compare this to the flat, soulless tedium of the digital format – so easily manipulated, so awash with the grotesque CGI features that exist in most modern movies, and one begins to recognise the need for picture houses.

Finally, cinemas proffer opportunities for communality and discussion that are becoming more and more scarce. The thrill of watching a movie and then immediately feeling the collective buzz as an audience is ‘found’ is impossible to replicate in the home, as is the discussion following the film with other participants in the audience – participation being the key here. By joining a wider crowd in experiencing a new movie, we engage with each other as well as with the film.

In a time when people are increasingly retreating in upon themselves, these havens of aesthetic interaction are to be cherished, much the same as indie gig venues and record shops are. Lose them and another element of our much depleted High Streets is hollowed out, brutally and without an obvious replacement.

There is, of course, much to laud in the new age of the ‘Small Screen’, not least its capacity to initiate the uninitiated and its ability to educate a far wider audience. In embracing it though, we must not forget the opportunities that historic formats and arenas still have to offer.

The ideal scenario is for both means of cinematic access to be maintained in parallel with each other. The hard commercial realities of modernity may beg to differ however. In our own ways of media consumption, lie the seeds of the future of movies.

What choices will you make?