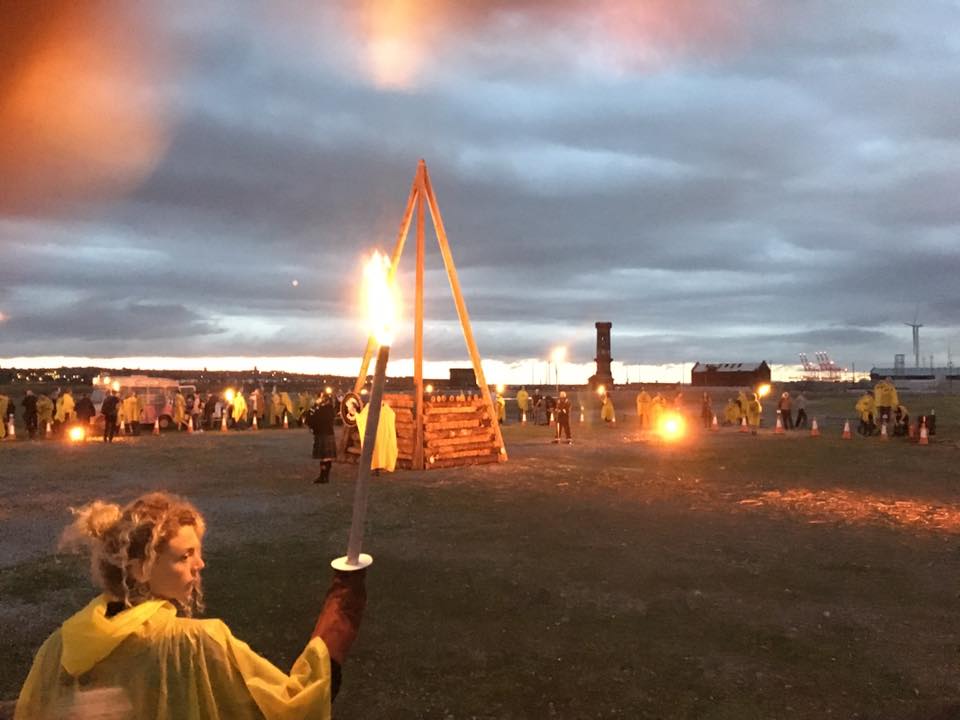 KLF – Welcome to the Dark Ages

Today sees the release of an interesting collaborative project which began…well, where to begin and how to begin? Things have a habit of getting more than a little confusing when the Justified Ancients of Mu Mu, also known as the KLF, are involved. Only they’re not involved, at least not directly, so hopefully we should be able to find a path through all this.

It seems to me that there are 3 potential beginnings to this story – a trilogy of beginnings if you will, and I will if you will. Thirty years ago, just as they were about to unleash their so-bad-it’s-good international hit single Doctorin’ the Tardis on an unsuspecting world, the Justified Ancients of Mu Mu (or Jams, for short) wrote back to a young fan by the name of Andy Gell, who had sent them a demo tape. They advised him to start his own label and release his music himself. Thirty years later, on the anniversary of the release of Doctorin’ the Tardis, Andy Gell (with the help of a lot of friends) has finally followed that advice. So that’s one place where we might begin.

But looked at another way, this idea was really conceived in Liverpool in August of last year when the Justified Ancients of Mu Mu made their much heralded return after a 23 year absence, accompanied by 400 of their most ardent fans (myself included) who “volunteered” to assist the Jams in their endeavours. That event or ‘situation’ was positively pregnant with meaning and potential. And now, nine months later something new has been born – The 400 Remix Project.

Or maybe the real beginning of this project was some time shortly after the Jams’ Liverpool ‘situation’, when Andy Gell (remember him?) made a seemingly innocuous remark in one of the Facebook groups formed by members of the 400. Andy joked about the possibility of re-recording the Jams’ 1991 hit single It’s Grim Up North utilising the velvet tones of Oliver Senton.

Oliver, who had hosted the Jams Liverpool event, has the sort of voice with which he could easily carve out a lucrative career as a voiceover man, so it made a kind of sense. On the final day of the Jams’ Liverpool situation he had even read aloud to the 400 the words of Bill Drummond as found on the cover of It’s Grim Up North, which Jimmy Cauty once remarked was his favourite of all Drummond’s writing. Andy Gell’s suggestion was only half serious, but strings were pulled, Oliver Senton was up for it, and so the 400 Remix Project was underway.

The call went out amongst the 400 volunteers for, err, volunteers to contribute to a potential charity album which would draw it’s inspiration from the Jams’ Liverpool situation (known as Welcome to the Dark Ages) and their newly published utopian costume drama, 2023 – A Trilogy. The 400 are a pretty diverse and creative bunch with numerous professional musicians amongst their ranks and a similar number of (so-far) frustrated or aspiring musicians. Some 37 people gave their time, energy and creativity to this project, all coordinated by the 400’s man with a masterplan, Mr Andy Gell.

We caught up with Andy to discuss the project.

Getintothis: Jams fans are a pretty diverse bunch with broad musical tastes. Is that reflected on the album?

Totally. There’s a smattering of more traditional dance tracks, but plenty of other bases are touched too. Drones, HI-NRG, cello pieces, London-Irish folk, poetry, Krautrock and much, much more!

Getintothis: Have you had a good response so far? How are the pre-sales going?

Very well thank you. We’re about to sell out of the CDs in pre-orders alone. Then we have a tough call to make. 100 limited edition CDs then downloads only after that, or another batch of CDs to be pressed. We need to consider our charities and what will make the most for them.

Getintothis: Which charities stand to benefit?

The proceeds will be split between The Natural Death Centre Charity and The Florrie ADP / NYC Appeal.

Getintothis: You’ve coordinated the whole thing which has obviously involved a big commitment on your part. Who else deserves special mention for their time and effort?

It’s been a real effort. In no particular order – Lisa Lovebucket for grabbing hold of my insane idea and getting Oliver involved. Oliver Senton himself, who may well be the nicest, most generous man in showbiz. Sam Buckley down in Brighton who gave us free studio time. Andrew Robinson who put together the stunning packaging. John Pitts who mastered the vast majority of the tracks. And of course the collaborators themselves, some of them seasoned pros like Richard Norris (formerly of the Grid, and presently of the Time & Space Machine and Beyond the Wizard’s Sleeve), Scaramanga Silk and Stephen Clarke 1980, as well as the rest of us keen first-timers.

Getintothis: Have you been surprised by the response from the volunteers? I’m guessing that you’d never even met quite a few of the people who agreed to work on this project.

I’d met precisely none of them whilst at the Dark Ages Liverpool event, where I really only chatted to a few dozen folk. But since then quite a community has sprung up and everyone seems to share a certain mind-set.

I took inspiration from Ken Campbell (the maverick theatre director whose daughter Daisy Campbell acted as an agent of the Jams in Liverpool last summer) just phoning Yoko Ono to ask for her help, and from Bill Drummond ringing Tammy Wynette. If you don’t ask you don’t get.

Getintothis: Are there any plans to take the project further?

Yes. We are looking at a legit, slightly less Kopyrite Liberating version, along the lines of the Jams 1987 – The Edits (a legal version of the Jams’ first album which edited out all the uncleared samples on the original version), but without the long periods of silence. Maybe a seven inch, maybe a vinyl album release. The only certainty is that it will remain a 100% charity venture. That has bought me a lot of good will and favours in recent months.

Getintothis: How about a gig and reunion for the 400, possibly at the Florrie?

We have discussed something amongst ourselves event-wise. I am conscious of the fact that wishes tend to come true where the 400 are concerned. Let’s just say, “await further instructions…”