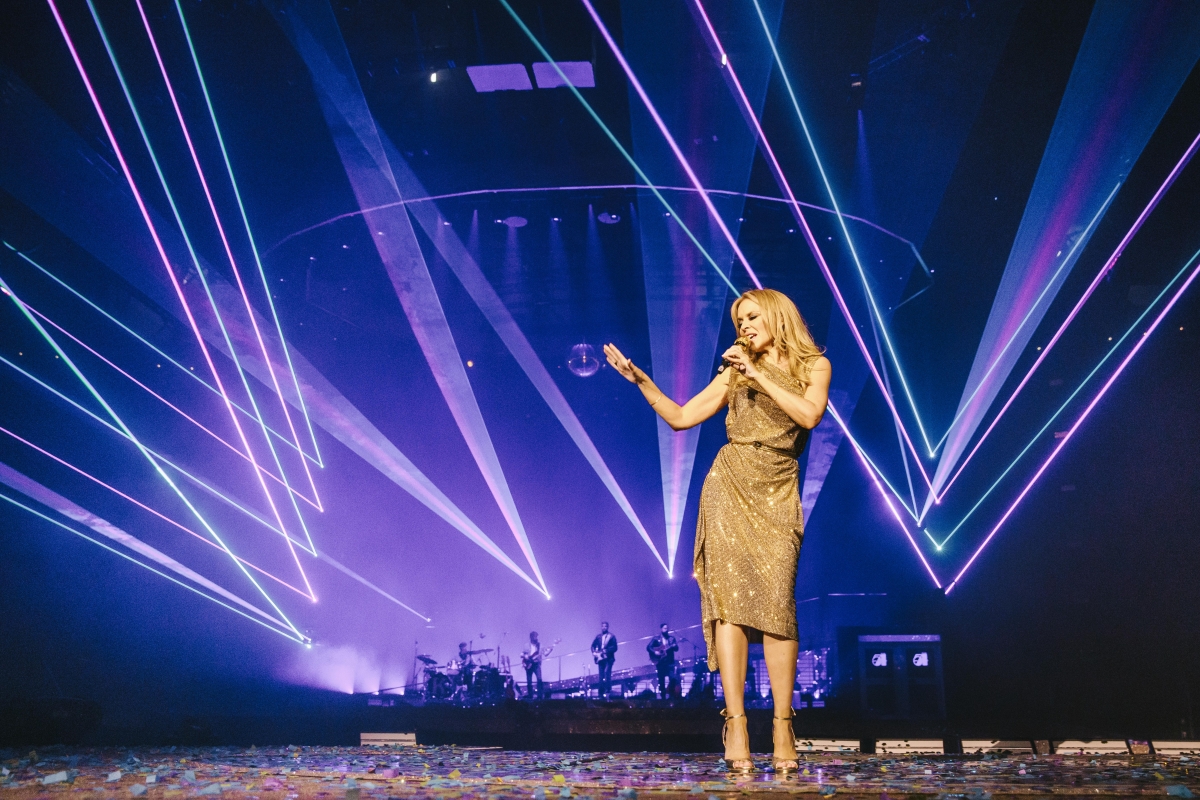 Kylie grabbed the audience at the Echo Arena with charm and her electric personality and Getintothis’ Peter Goodbody was there to indulge in her Golden tour.

‘When I go out, I wanna go out dancing,’ sings Kylie on the first track of new album, Golden.

We assume she’s referring to a night on the town, rather than a meeting with her maker. But either way, after tonight’s performance we can well believe her.

She may have turned 50 this year, but she doesn’t really show much sign of letting go, nor even slowing down, any moment yet.

We take our seats just as the Sonic Yootha DJs are lowered down on a platform into the bowels of the Arena basement and Dolly Parton’s 9 to 5 comes on over the PA.

We are later to learn the stage has more then one vertical exit and entrance point, all used to good effect as we never quite know who’s coming up or going down next.

Dolly Parton as an intro is entirely appropriate for Kylie’s new country and western image. Golden has a definite country vibe about it.

There are Stetsons in the audience and the atmosphere is being whipped up like a US mid-west pre-election rally.

Then the lights dim and a number of stetson bearing dancers arrive on stage and Kylie appears out of nowhere in a pink dress and white cowboy boots.

She opens with Golden “Who’s feeling Golden tonight?” And then Get Outta My Way from the new album. 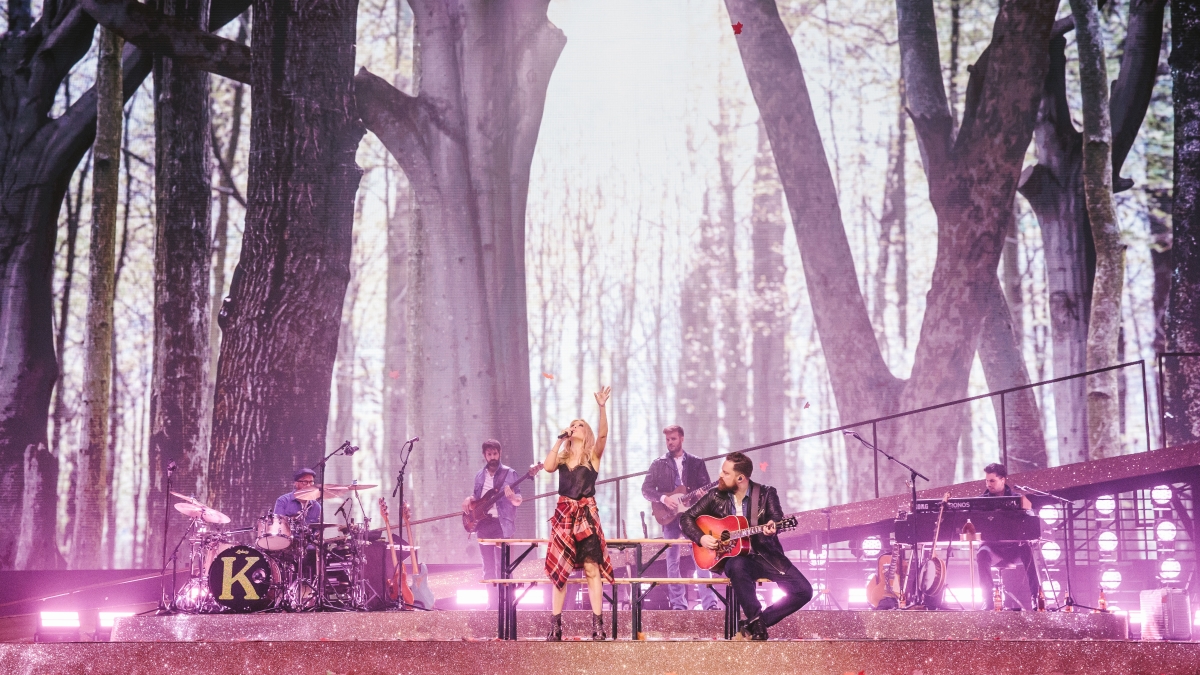 Better The Devil You Know comes next and had plenty of people getting out of their seats to dance and then Kylie disappears below the stage via yet another black hole.

The band play Blue Velvet and half way through Kylie appears, first on the huge video screens joining in from somewhere down below, before returning on stage, dressed in a white suit this time.

Looking all Thin White Duke. We kind of expected Station to Station or TVC15, but instead we had a superb rendition of Confide in Me. That and follow up I Believe In You demonstrated, if required, she still has an amazing vocal range. They were pretty perfect really.

Then, “Who’s gonna be my wild rose tonight?” she asks. Although disappointingly we only got the first couple of lines. That was, perhaps the major disappointment of the evening. It would have been superb to hear her interpretation of that most unlikely of duets sans Nick Cave.

The first part of the show is full of stereotypical US imagery, with video of arid plains and saloon bars and Buick’s being projected behind the stage, the backing dancers favouring denim jeans and check shirts as well as the aforementioned Stetsons.

Costume change no 2 sees Kylie return in full flared jeans and a gold lamé top for Shelby 68 – a proper country ode about her Dad’s favourite car.

Although she confesses her Dad said to her a real car nut would never have called the song that and it should have been ’68 Shelby.

Kylie – her great tracks and most memorable music moments

Too late, the album had already gone to press (or whatever the the appropriate term may be). The first half of the show finishes off with Can’t Get You Out Of My Head and the seated are up dancing again. To be fair, we’ll give them that. It was brilliant.

If the first half of the gig was mostly tunes from Golden with a handful of hits sprinkled in, then the second half was the opposite. Kylie has a rich back catalogue and this was the chance to show it off.

This may perhaps have been what the VIP crowd, gathered around the G shaped stage were waiting for.

The songs on Golden are, for the most part, pretty decent, but they don’t pack the punch of some of her earlier work. Their £160 a pop was about to be tested.

Kylie kicks off part 2 in full leathers and the dancers sat on three Harley Davidson’s at the front of the stage. KIds again shows her versatility and wouldn’t have disgraced a “proper” rock band. Really, we’re not joking.

Stop Me From Falling from Golden was probably the best received of the new album so far and had Kylie and the backing dancers doing barn dance style jigs around the stage until Kylie disappeared down under again for another costume change, leaving the rest of the troupe to carry on for a few moments.

A short black dress with a check shirt tied around her waist is what appears next for Wouldn’t Change a Thing and Especially for You.

“Get your torches out” implores the Princess of Pop. Lots of people do, although the guy in front of us has to be prompted by his partner to turn his phone around as he’s pointing his torch at the back of the room rather than towards Kylie. 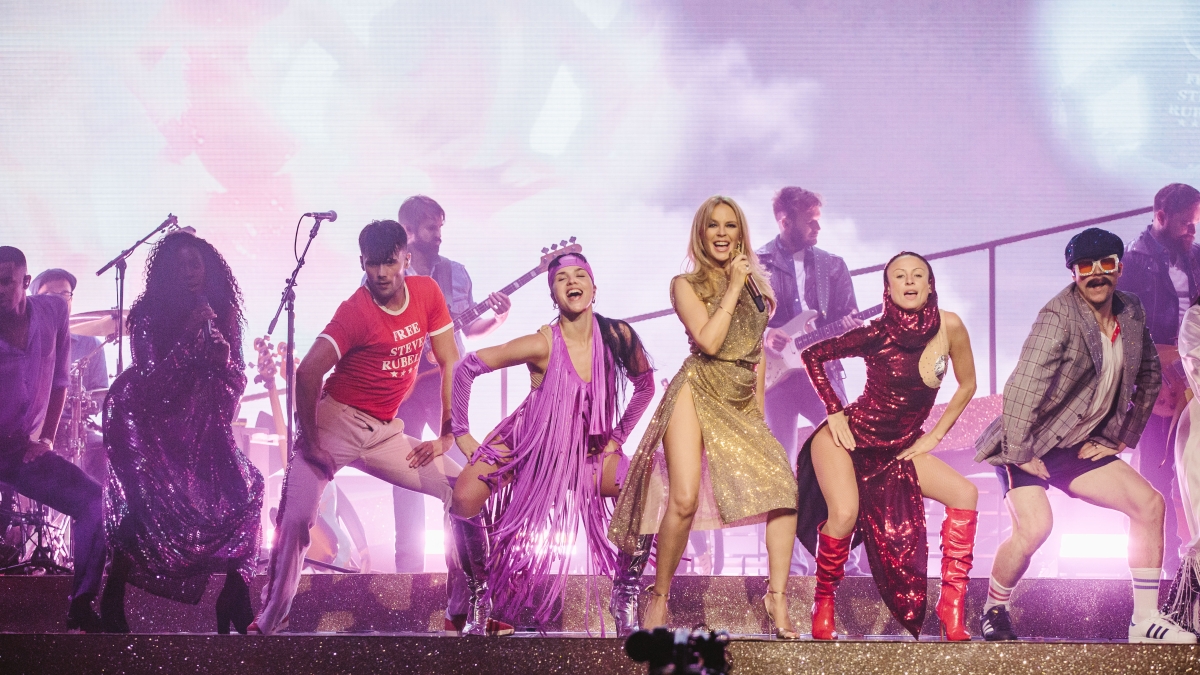 She leaves the stage for presumably one final costume change and Studio 54 imagery is projected on the screens. Guess this will be the disco part of the show. We weren’t wrong.

She’s back in a gold sequinned dress. And we get New York City, On a Night Like This, Do the Locomotion. This was ’70s New York transported to Liverpool and we were sold.

Spinning Around was the finale, as it was always going to be. We probably could have told you that before we started.

Except for the encore. One last costume change (white cape and silver boots, seeing as you asked) and Kylie was ready for Love At First Sight.

The cape came off to reveal a green glittery hot pants suit. Just the thing for set closer Dancing and we’ve come full circle. She went out dancing.

It seems like we had a potted Kylie history and an overview of where we are now in terms of her current thinking. And that’s no bad thing.

The tour is plugged as The Golden Tour, so naturally she’s doing the new stuff. She has to please the audience by doing the hits, and why not? But in a way, her nod over to the USA and the Shelby 68 seems more interesting.

We wish she could develop it more. So, actually, it’s not really a guilty pleasure. She’s a damn fine performer who can rock, disco and country as she chooses.