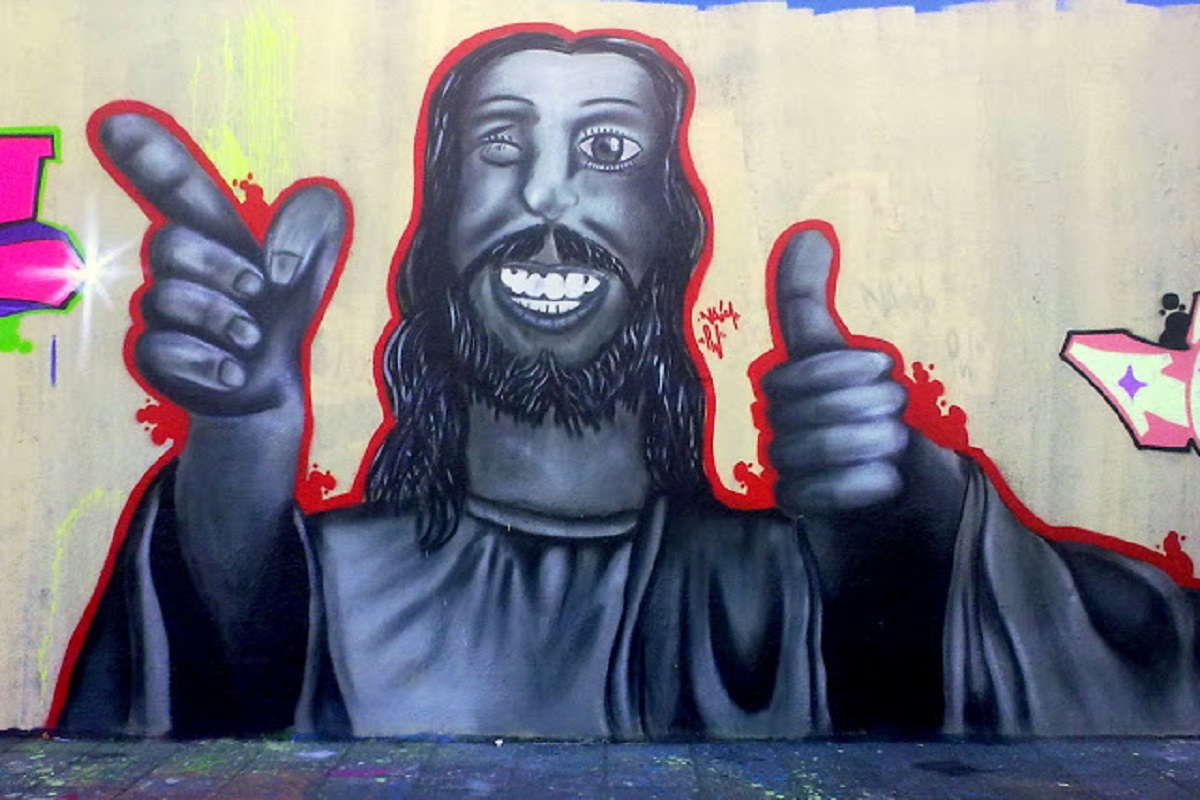 As Easter approaches Getintothis’ Roy Bayfield rolls away the stone to look for songs about Jesus that are actually good.

So said Hank in a an episode of King of the Hill, chastising a Christian rock band for their lameness. And he has a point – there’s plenty of evidence that religion and rock don’t mix.

Indeed any kind of pop with an overtly evangelical message seems like a bit of a trick – hiding a worthy ‘message’ in the rhythms of funtime sex-music.

‘Wash me in the blood of rock and roll’ sings Jayne County in Rock ‘n’ Roll Resurrection, invoking the religious ecstasies that flow from music itself – who needs religion when you’ve got Jimi, Janis and the rest to take us higher?

Michael Stipe is losing his religion in the corner, Johnny Rotten is naming himself an antichrist, Lennon declaring the Beatles to be bigger than God – does rock need some clear water between it and the officially sacred to be true to itself? Maybe the devil does have all the best tunes.

Nevertheless, Jesus does feature in some great tracks – but they tend not to be straight-up devotional songs. When artists take a too-direct approach to godly matters the results are often tame and a bit pointless.

Bob Dylan’s In the Garden for instance, from his early-80s ‘born again’ period, retells the New Testament in fine style, but he’s written literally hundreds of songs that are lyrically more allusive, more intriguing, arguably more spiritual by being less literal illustrations of what he believes.

On the other hand assorted doubters, sinners and pisstakers have created songs with the J-Man as a lyrical touchstone that have some kind of wild and deep resonance.

Whatever one’s view there is probably a soundtrack to go with it.

So to explore this, here’s an Alternative Easter music selection, looking for tracks with Jesus in them that aren’t simply ‘Songs of Praise’ with amplifiers.

These have been selected from a surprisingly vast range. There are plenty of songs that lob in a reference just for the hell of it, such as Barny Fletcher’s exuberantly meaningless rap ‘Christ flow / it don’t mean much / but it’s sounding tight though’, but we’ve looked for songs with at least a hint of theological intent.

And simply having Jesus in your band name isn’t enough either, so Teenage Jesus and the Jerks, Jesus Jones, Jesus and Mary Chain et al. can sit in a pew at the back.

From pancakes to dogs to springtime and more, explore Getintothis’ archive of Top 10’s

Open your hymn books and here we go…

The opener for Quintessence’ self-titled second album (1970) lines Jesus up with three other holy characters in an exuberant slice of prog-rock polytheism.

In an interview bassist Sambhu Babaji said their music was designed to create a ‘feeling of devotion to an aspect of the God-head, whatever you want to call it’ – previewing the kind of open exploration that has enabled the post-hippie generations to experience the depths of multiple traditions and the shallows of pick ‘n’ mix spirituality with Buddhas in garden centres alongside the gnomes and motivational office posters quoting the Bhagavad Gita.

‘I don’t know if God was ever a man / But if She was I think I understand / Why he found a place to break his fall / Near the Western Wall’ sings Rosanne Cash on this intimate, reflective track from the 1996 album 10 Song Demo.

Based on a childhood visit to the Wailing Wall in Jerusalem, the lyrics draw their quiet power from doubt and wondering rather than certainty. The track was covered beautifully by Linda Ronstadt and Emmylou Harris on a duet album of the same name in 1999.

Shine On Sweet Jesus is a deranged psychedelic pop anthem from an album that majors on religious themes (1990’s In A Priest Driven Ambulance).

Yet according to Wayne Coyne ‘None of us are religious …none of us would actually want to be doing songs that are talking about Jesus’ – so the people doing the songs are ‘characters’, the whole thing an exercise in playacting that, paradoxically, makes the music more real.

Whatever the intention the delirious track creates an overwhelming sense of being carried away on a rising tide of spiritual fervour.

The record had its origin in a project responding to The Words, a book featuring Jesus’ teachings in modern language laid out like grungy billboards.

The album is a series of poetic meditations on the Christ story delivered in tracks that range from freak-folk to Velvets-style rock, Jones sometimes seeming to be singing from a trance state or making up words on the spot.

Elvis Cadillac is one of the more accessible offerings, a sweet vision of a heaven where you can drive around in the (other) King’s car. Assuming that like the rest of the album it’s about Jesus this would be the Easter Saturday moment, the in-between time when the Man is actually dead and gone away.

As you drive westwards from Brighton on the A27, the view suddenly opens out on to the River Adur meandering across fields beneath looping flyovers.

This is the site where Nick Cave chooses to have Jesus crashland on earth in this bleak industrial ballad from 2016’s Skeleton Tree.

Nick Cave calling out to a Jesus who seems merged with humanity in all its suffering, evil and beauty is a heart rending experience.

A singer who has always sounded like a prophet, Nick Cave once wrote an introduction to Mark, the gnarliest of the gospels, which he described as ‘a clatter of bones, so raw, nervy and lean on information that the narrative aches with the melancholy of absence’.

In this song that absence unfolds as a tragic lament: ‘You’re a distant memory in the mind of your creator, don’t you see?’

5. The Clash – The Sound of the Sinners

Joe Strummer used to read the Gideon Bible in hotel rooms on tour, saying ‘It’s fantastic, isn’t it, that they put a book there for you for free, and what a great book to read’.

Some of that extensive Biblical exploration must have filtered in to this mad, apocalyptic gospel offering from 1979’s Sandinista! which combines drug-addled visions of being Jesus, sudden belief arriving in the midst of an earthquake and ‘that great jazz note / that destroyed the walls of Jericho.’

The cry of ‘I ain’t good enough / I ain’t clean enough / To be Him’ puts it in a long tradition of ‘wretched sinner’ lyrics that stretches back through folk traditions to the Bible itself, though seldom has confession sounded as joyous as this.

As Kanye West prepares to deliver a ‘Sunday Service’ with choir on Easter Sunday at this year’s Coachella, we turn our ears back to Jesus Walks from his 2004 debut album.

It’s an apocalyptic track, in the original sense of the word ‘apocalypse’ meaning to reveal or uncover, taking the lid off a world where ‘We at war with terrorism, racism, but most of all we at war with ourselves’. This Jesus walks alongside ‘the hustlers, killers, murderers, drug dealers even the strippers’, and West’s character wrestles with the industry imperative that says ‘you can rap about anything except for Jesus’.

3. Van Morrison – In the Garden

On another occasion he said of religion that he ‘wouldn’t touch it with a ten foot pole’‘.

He has sung out-and-out hymn covers and soul-gospel belters such as Full Force Gale and Youth of a Thousand Summers, whereas on No Religion he sings ‘it’s so cruel to expect the savior to save the day…there’s no religion here today.’

His output includes nods to Buddhism and more open spiritual seeking, being a ‘dweller on the threshold’. In the Garden is a lush pastoral meditation in which nature, the beloved and the Holy Trinity seem to flow together in mystical union – needing ‘No Guru, No Method, no Teacher’.

Despite having famously declared that ‘Jesus died for somebody’s sins but not mine’ in the opening lines of Gloria, Patti Smith has produced a unique body of spiritual work over the decades, proving herself to be a mystical, visionary artist in the tradition of William Blake and Thomas Traherne.

Easter, the title song that closes out her third album, is a luminous and hypnotic track, imagining the poet Rimbaud on a walk to a church on Easter Sunday, trying to describe the poetic transformation of the world he experiences to his siblings, the song dissolving into a cascade of imagery infused with religious language.

1. Johnny Cash – The Man Comes Around

The Man Comes Around sounds like reportage from the end of days, delivered by someone who knows exactly how it’s going to go down in the moment of ‘Alpha and Omega’s Kingdom Come’.

Bookended with scratchy recordings of Cash in preacher mode, the track from his final album combines biblical phrases with the singer’s own dream-inspired images of whirlwinds and thorn trees.

The music is stark, urgent, nailed down with soul-shivering bass chords, Cash’s parched voice sounding like that of a true American prophet. Uncompromising, terrifying brilliance.

Having come this far everyone deserves an Easter Egg, so here – based on madness and verve alone and with no Redeeming features – is an utterly demented industrial psychobilly track from 1991 by Ministry featuring Gibby Haynes from the Butthole Surfers on vocals.

Have a happy Easter, don’t eat too much chocolate, and in the words of Mark E. Smith ‘Walk not perverted, walk with religious language.’

All the tracks in one divinely-ordained playlist:

Other tracks mentioned, outtakes, apocrypha and near misses: