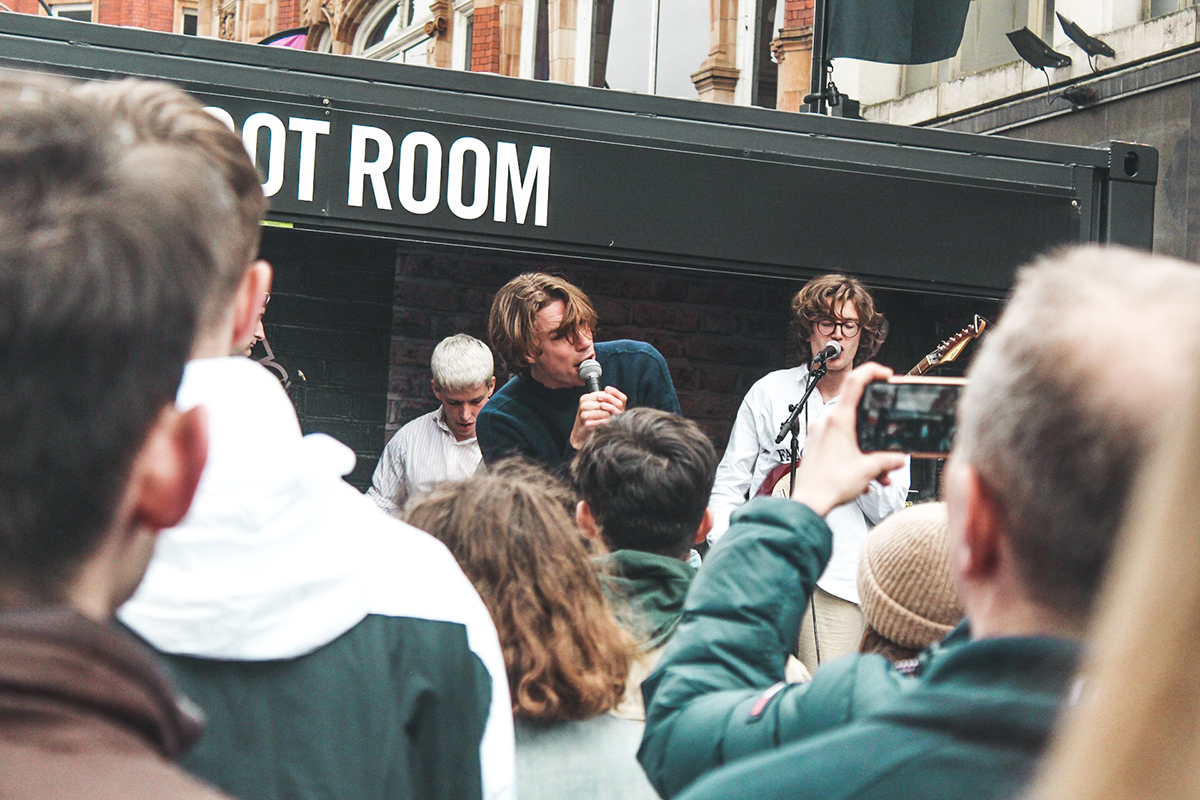 Live at Leeds spread across the city delivering music, buzz and general fun, Getintothis’ Amalia Gherman went to check it out.

Leeds is a special place buzzing with live music and  festivals that we have been keen to check out for a while.

Given the opportunity to cover Live At Leeds this weekend, we jumped at the chance and in the event it proved to be everything we could’ve hoped for and more.

The festival is split over 21 stages throughout the city, ranging from the O2 Academy and other well known venues, to small pop up stages in the street, along with surprise sets in clothing and music stores. The latter of which are free to attend, meaning even those without a ticket to the festival can enjoy live music from some of the country’s best bands throughout the day. Around 200 bands filled every venue across the city drawing in crowds of all ages from the local area, and further afield, for the festival.

As we were arriving into Leeds our phone buzzed with a notification from the handy Live At Leeds app. There’s to be a bonus. Sports Team would be playing a surprise “secret” set on Briggate High Street, one of the city’s main streets for shopping, at 2:30pm. After checking into the hotel we made our way to the Dr Martens Boot Room stage to catch them playing. We arrived slightly early and caught a set from a local band The Black Lagoons who drew in a fairly large crowd with their distinct rock and roll guitar sounds and 60s rockabilly-meets-grunge appearance.

The crowd were still buzzing as The Black Lagoons finished their set, with only a few shoppers turning away to carry on with their day. Excited chatter filled the air as Sports Team appeared on stage to begin their set, a huge cheer erupted as the first chord of their hard hitting track Camel Crew blasted through the speakers, drifting through the surrounding streets and demanding the attention of toddlers and grannies alike.

As always front man Alex Rice delivered an energetic and slightly chaotic performance, jerking around the stage and spinning his mic stand around like a rag doll, undoubtedly stressing out the stage manager but entertaining the crowd nonetheless. Sports Team know how to work a crowd and were easily the highlight of the day and clearly a favourite for the masses surrounding the small stage. And we’ve only just got started.

At 4:45 it was the turn of Leeds’ own Marsicans to hit the Leeds Festival Presents stage at the O2 Academy, impressively filling the venue close to its capacity. A large screen behind the band flickered along with the lights as they walked on to a cheering crowd of over 2000 people. 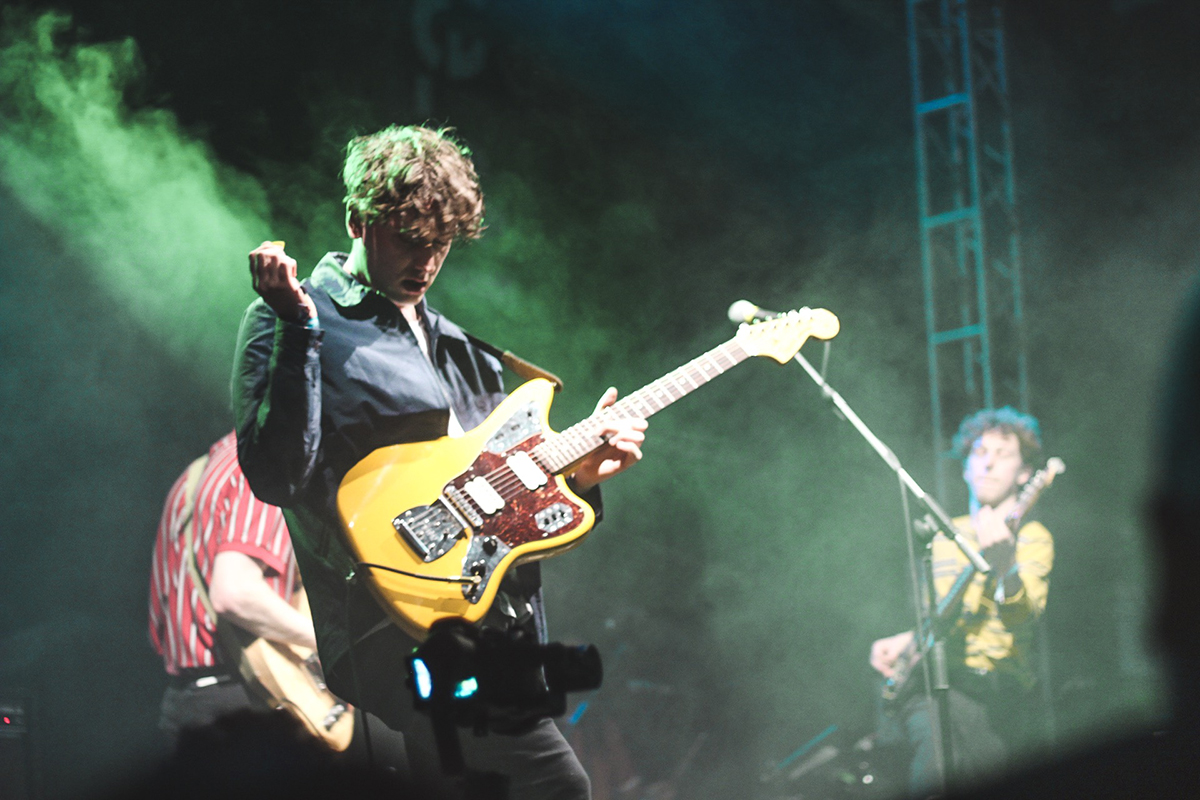 As they took their places the lights went up in a brilliant flash of pink and blue and their logo appeared on the large screen in the background. Smashing through their set, starting with the brilliant new track Your Eyes and heading straight into the nostalgic sounding Suburbs, Marsicans had everyone in the room moving. A large mosh pit formed in front of the stage with people dancing, jumping and screaming along to every word the band sang.

Others climbed up onto shoulders and struggled to keep their balance as they bounced along to the pulsing beats and roaring guitars, as lead vocalist/guitarist James Newbigging sang “So won’t you come swimming” a sea of waving arms filled the venue along with thousands of other voices singing back to him.

The band had perfectly grabbed the attention of the crowd and started up a call and response during the bridge of their feel good tune Throw Ourselves In. There was no need for guitars and the band themselves stepped back in awe as their adoring fans carried the song without them. The atmosphere was electric as a rainbow of lights filled the room and the smiling faces of the crowd were visible for a split second, before the spotlight was back on Marsicans as they neared the end of their set.

This four piece from Leeds are a force to be reckoned with in the UK’s music scene and will undoubtedly be playing sold out arena tours across the country within the next few years.

Some of the festival’s venues were more spread out than others, with a 30 minute walk from the O2 Academy to the Brudenell Social Club where the next band on our list, Chappaqua Wrestling, were playing. We’d been lucky enough to catch them on tour with Black Honey earlier in the week and were more than happy to see them again. 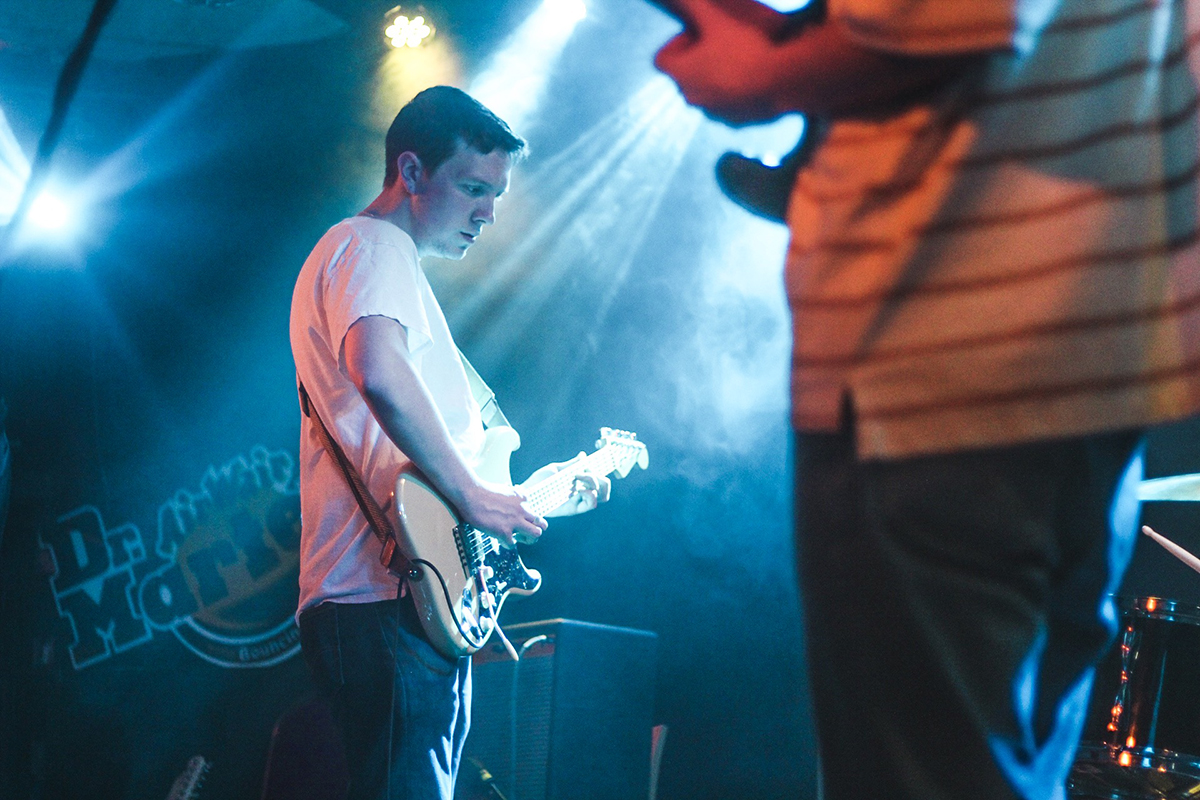 The band bring a recycled yet new sound to the indie scene, with catchy hooks reminiscent of the Beach Boys and subtle hints of The Stone Roses and Oasis mixed with mellow lyrics and toe-tapping beats guaranteed to make a crowd move. Despite touring with Sports Team earlier this year and supporting bands such as The Night Café and Blossoms, the venue was looking fairly empty other than a few people dotted around the back walls.

But less than 5 minutes into their set the room was packed full of people dancing and swaying along to their songs. The four piece from Brighton are definitely ones to watch this year; their most recent single Cry Every Time sounds like a track The Beatles would have written if they were around today. Their charming lyrics are hard not to sing along to and you’ll find yourself playing their tracks over and over again. It’s hard to get sick of a band that can create music as brilliant as this. Everyone should have Chappaqua Wrestling on their summer playlists this year.

Labradford: a buyer’s guide to a band way ahead of their time

A little while later we made our way back towards the centre and to our final venue of the night, The Lending Room to see Giant Rooks and Larkins.

Hailing from Berlin, Giant Rooks are making a name for themselves in the UK, with a successful run of shows around the country and a support slot with fellow Live At Leeds act Cassia last November, the band are making new fans everywhere they go.

They are undeniably cool, creating songs with force and boundless energy that make the whole room move. Considering the extremely popular Sundara Karma were headlining the O2 Academy just down the road, the room was crammed full of fans for Giant Rooks and the atmosphere was electric.

As the crowd filtered out from Giant Rooks’ set, Larkins began to set up on stage and more people began to appear in the room intently watching and waiting for the band to begin. After a small hiccup with the sound check Larkins were off to an amazing start with their new track Are We Having Any Fun Yet? building up excitement with the crowd as the lights flashed and everyone swayed along.

The band are rising stars in the music scene right now, with anthemic tracks such as Something Beautiful and TV Dream earning them a place on Radio 1 for Best New Pop Act and a feature in Made In Chelsea. The Lending Room was a beautiful venue to see the band play in, the gig was more intimate than most of their shows, such as their headline at the Albert Hall in Manchester two months ago, but still felt just as special and enjoyable. 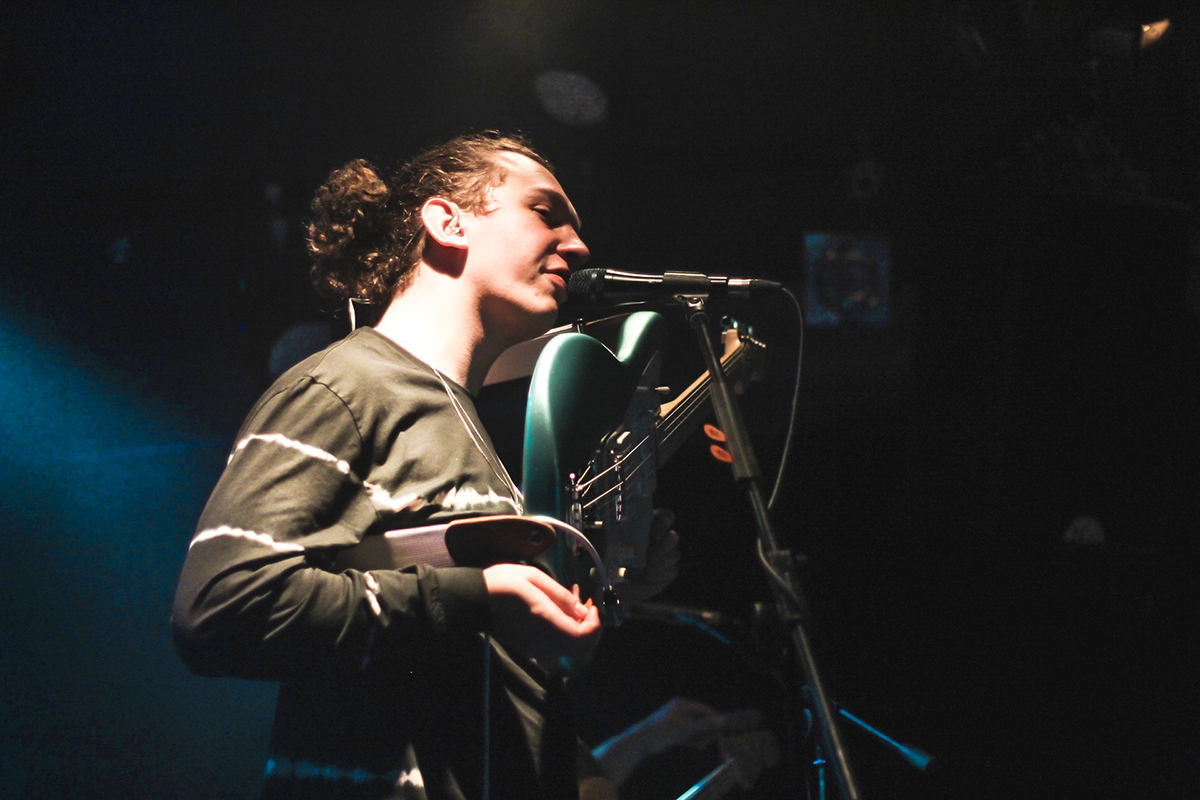 It was clear that everyone in the room enjoyed themselves as well as the band with guitarist Dom Want and singer Josh Noble dancing together as they played. Larkins will always be a personal favourite to see live and we’re sure many others will feel the same after this performance tonight.

Overall Live At Leeds was a very fun experience, the streets were full of fans running around to different venues and the queues snaked around street corners. All of the venue staff and security were very friendly and extremely helpful with providing directions and answering questions about performances, and everyone was kept safe and happy.

For just over £30 with so many amazing acts at every venue, this festival is well worth the cost of admission, especially considering the amazing lineup this year. 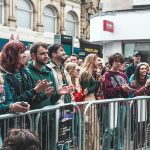 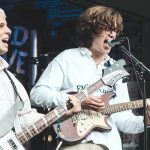 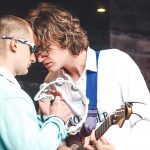 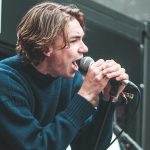 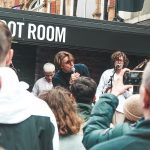 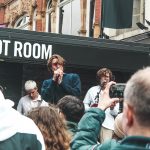 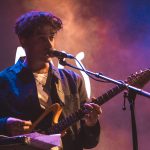 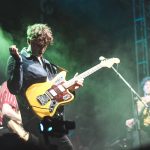 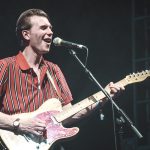 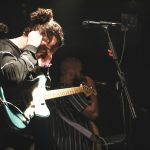 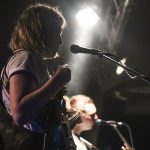 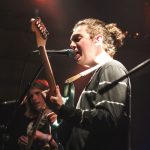 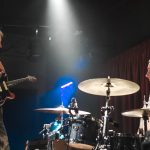 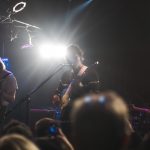 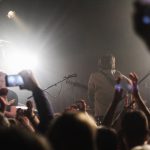 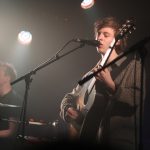 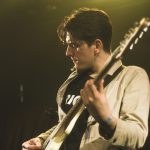 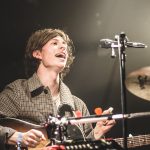 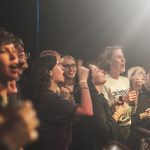 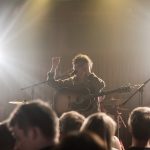 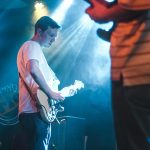 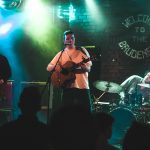 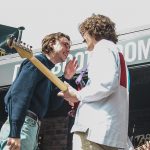