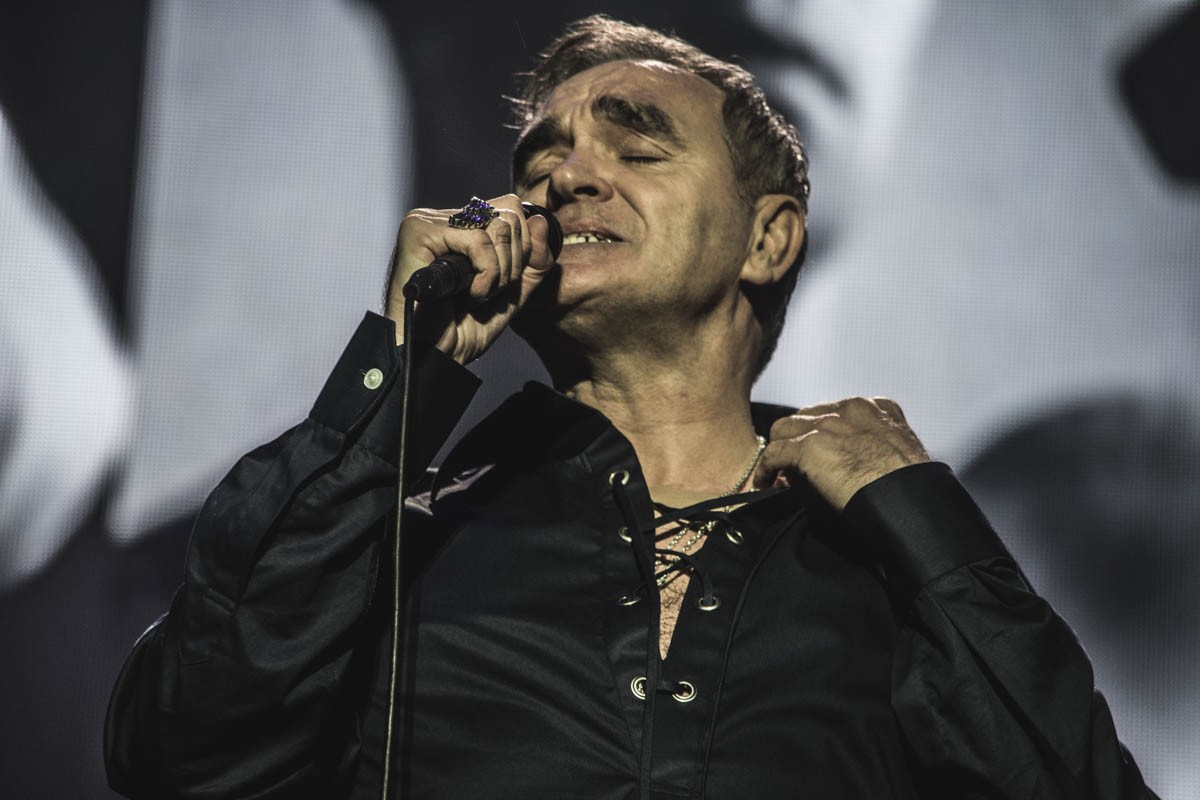 As Merseyrail remove all posters for Morrisseys latest album,  Getintothis’ Banjo wonders whether this is a positive move or lazy censorship.

This follows yet more controversy when the singer was seen on American TV wearing a badge with the logo of For Britain, an anti-Islam, far right political party. For Britain have claimed that their membership has increased in the time since his appearance and the subsequent publicity and have thanked Morrissey for his support in a video message, saying ‘I can tell you that the traffic to our website exploded with the story breaking of you wearing the For Britain button badge.’

Explaining his support for For Britain, Morrissey told the NME ‘I have been following a new party called For Britain which is led by Anne Marie Waters. It is the first time in my life that I will vote for a political party. Finally I have hope. I find the Tory-Labour-Tory-Labour constant switching to be pointless.’

‘For Britain has received no media support and have even been dismissed with the usual childish ‘racist’ accusation. I don’t think the word ‘racist’ has any meaning any more, other than to say ‘you don’t agree with me, so you’re a racist.’ He went on to say ‘there is only one British political party that can safeguard our security. That party is For Britain.’

He also added ‘It’s very obvious that Labour or the Tories do not believe in free speech. I mean, look at the shocking treatment of Tommy Robinson.’

Morrissey is no stranger to other accusations of right wing and racist views, all of which he has denied.

There has been repeated evidence of Morrissey’s far right views over the last few years, each new furore followed by claims of him being victimised and misunderstood. He called the Chinese a ‘sub-species’, stated that Hitler was left wing and said that London Mayor Sadiq Khan ‘cannot speak properly.’

In another interview with the NME, Morrissey said ‘England is a memory now. The gates are flooded and anybody can have access to England and join in. Although I don’t have anything against people from other countries, the higher the influx into England, the more the British identity disappears. So the price is enormous. Travel to England and you have no idea where you are.’

The removal of the posters happened after a complaint was made by a Merseyrail passenger, Jack Dotchin, on the Southport line. Mr Dotchin contacted Merseyrail and asked if they agreed with Morrissey’s opinions. He has since said that he was not offended by the posters and did not ask Merseyrail to remove them, but questioned the company on whether they thought they were appropriate.

Mr Dotchin said that Morrissey’s controversial comments ‘offend me and a lot of other people. He’s very far right these days, going on about immigrants. It’s just strange to think Merseyrail, being a public service for the people, is advertising someone with his views.

It’s just pictures of Morrissey with his new album. He’s not doing anything inappropriate but his name is a by-name for questionable views at the moment.’

Merseyrail said in a statement that ‘Any content used within advertising on the Merseyrail network does not reflect the organisation’s values and we apologise for any offence the publication of these posters may have caused.’

In a statement on Morrissey’s website, the singer said ‘With voice extended to breaking point, I call for the prosperity of free speech; the eradication of totalitarian control; I call for diversity of opinion; I call for the total abolition of the abattoir; I call for peace, above all; I call for civil society.’

There is obviously a debate here about free speech and censorship. Is removing posters of Morrissey an appropriate response to his political views?  If so this could set an alarming precedent, whereby Merseyrail or, by extension any other company, can remove advertising if it doesn’t align with their own political views?  And who would decide what these views are?

Also is it enough for the posters to be removed as a result of a single person complaining?  If not, how many is enough?

Offense is personal and is a hard to define concept. There must be very few adverts, songs, artists, books that someone, somewhere wouldn’t find offensive.  Being offended is your right, having someone take your offense seriously is not.

Offense has become such an overused term that it signifies little these days.  With the country polarised as never before by Brexit, it is difficult to look at the newspaper headlines and not see something that we deem offensive.

Personally I am offended by the amount and the nature of the ‘risqué’ images of young girls that Merseyrail seem quite happy to display.  That said, I have never complained about them or lobbied to have them removed.

But where does that leave me? By not acting am I implicitly approving and therefore perpetuating these adverts, enabling the climate in which they flourish?  If I were to make them, would my complaints hold the same sway with Merseyrail or, as I have imagined would be the case, would I receive a nicely worded letter letting me know that no further action will be taken?

Maybe I should test this and find out.

By taking direct action, Mr Dotchin has achieved a victory for himself and others who find Morrissey’s politics objectionable and, yes, offensive and see these posters as a way to promote the man and what he has come to stand for.  Maybe this direct action is the way forward and we are seeing people power making a difference rather than walking on by and accepting what we see around us that we are opposed to.

There are more questions than answers here, it is easier to ask questions of this nature on your own than it is to properly answer them.  We are immediately caught in an argument where we can see good points for and against.  Let it be noted that we are not arguing in favour of the promotion of racist views, nor are we standing against free speech and all the tenets that it entails.  It is a hugely complex and involved area that requires debate and involvement.

I am reminded here of an advert Sex Pistols made for their debut album that was banned by the ITV network.  A statement at the time let us know that that there was nothing in the content or the wording of the advert, but it was the product itself that the company found objectionable.

At the time I took this as very wrong, that by banning an advert for something they didn’t like, ITV were guilty of cencorship and moral book burning.  It would be wrong of me to approve of this when it affects something I myself find objectionable, I would suddenly find myself less like the 17 year old punk I was and more like the anonymous businessman I thought was so obviously in the wrong.

As the saying goes, I disapprove of what you say, but I will defend to the death your right to say it.  That said, there are of course limits to this, such as banning hate speech, distributing instructions on how to make weapons, etc.  And again, we find ourselves in a position where we wonder who sets the rules and guidelines on what is and what is not permissable.

But it seems that once again Morrissey is promoting an album on a tide of controversy. The days of fronting The Smiths and him singing ‘It takes guts to be gentle and kind’ and seem a long way off and it has become impossible to separate his music from his apparent political views and the way he chooses to express them.