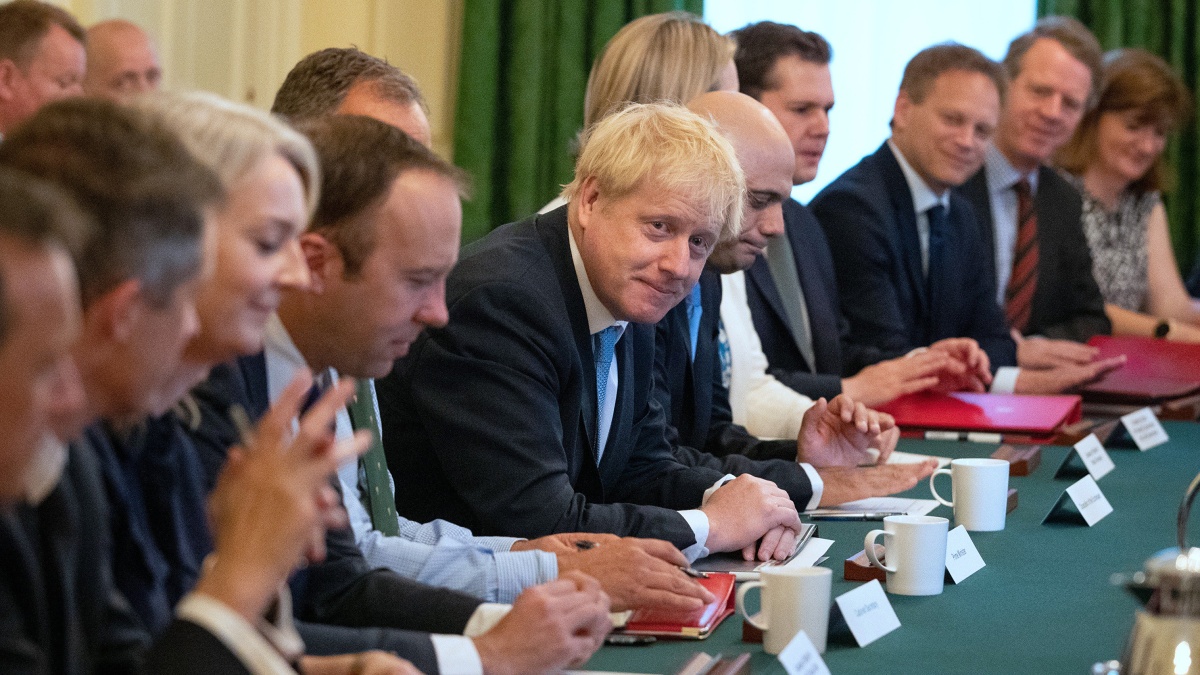 Johnsons 1st Cabinet Meeting, photo from from No10 Twitter

Amidst the madness and as the Brexit deadline looms ever nearer, Getintothis’ Jono has a closer look at what he thinks might be behind the headlong rush into committing constitutional chaos

It seems our Prime Minister Alexander Boris De Pfeffel Johnson is in a rush.

These are desperate times.  Britain MUST leave the EU on 31st October!

DO OR DIE!  We MUST get Brexit DONE!  He’d rather be found DEAD IN A DITCH than ask the EU for another extension!

The Tory rhetoric is getting out of hand, the desperation is palpable and it’s ripping their party apart.

Rees-Mogg, the leader of the House of Commons, was apoplectic in parliament on Tuesday 3rd, going as far as accusing MPs of “subverting parliament’s role” and his colleague Oliver Letwin of “stunning arrogance“.

So why the rush?

If it meant they could get the withdrawal from the EU they so desperately want and how they want it just by just waiting a few months, what’s the problem?

They could even avoid the insanity of threats of no-deal or the impossibility of backstop negotiations.

They might even get away with clawing back a little of the cohesion of their party and their election chances. This is a permanent, international event, surely a few months would make no difference at all in the long game?

The answer might lie in a press release from the European Commission from the 24th July this year.

The heading of the memo? “Fight against money laundering and terrorist financing: Commission assesses risks and calls for better implementation of the rules”

It seems quite an innocuous and sensible step to enhance co-operation between member states to crack down on international crime. Why should this particular piece of legislation cause such concern?

No one likes terrorism…do they?

Nevertheless, this paragraph may have caught the eye of a number of MPs with banking interests:

“The fifth Anti-Money Laundering Directive will improve the powers of Financial Intelligence Units, increase the transparency around beneficial ownership information, as well as regulate virtual currencies and pre-paid cards to better prevent terrorist financing. Member States are due to transpose the Directive into national law by January 2020.”

In late 2017 a scandal broke that became known as “The Paradise Papers”.

1.4TB of files were anonymously provided to German newspaper the Süddeutsche Zeitung, it was the world’s second-biggest data leak.

It was the records of a company called Appleby (now called Estera), a law firm and corporate services provider that operated internationally to assist both companies and individuals to avoid paying tax.

But another group who made enormous offshore investments appeared, all linked by the murky financial dealings behind Brexit.

These people represent some of the big money distorting British politics and ruining the lives of the British people.

Not only do these men use companies such as Appleby to avoid tax, but they also use them for secrecy too. The leak revealed that the Barclay Brothers, who own the Daily Telegraph, used a company based in Bermuda to act as nominee for shareholders in their business as “several of our clients do not wish their names to appear on the share register”.

The papers also revealed direct involvement of pro-Brexit politicians too, including Andrea Leadsom’s husband and our very own Jacob Rees-Mogg with his shadowy “Old Etonian friend”. Leadsom‘s husband Benjamin works as a director for his brother-in-law and tory party donor Peter de Putron.

The business they run together is a multi-billion dollar hedge fund based in Guernsey with other offshore interests in Malta for instance. Meanwhile, Rees-Mogg appears in the leaked files a number of times due to his complex offshore financial arrangements, and most noticeably for trousering $680,000 when an investment firm he worked for was bought out by a Canadian Bank.

Although not mentioned in the Paradise Papers, another hedge-fund owner Crispin Odey not only sunk £873,323 into UKIP and other Brexit campaigns but also gave Alexander Boris De Pfeffel Johnson a £10,000 bung back in August. He has since spent £299m in taking out “short” positions on some of Britain’s biggest firms including Royal Mail, meaning he’ll profit if the share prices of these 16 UK businesses fall.

It’s in his interest to the tune of millions that the UK economy fails, and our Prime Minister is on his payroll.

All these people, with all this money, will come under a LOT more scrutiny when the EU brings in “reinforced cooperation between Financial Intelligence Units” in January 2020, and they’ll do everything within their power to stop that happening.

Their most reliable method to protect themselves is to lean on the politicians they have bought to manipulate the law for them. The politicians are simply the front men of this money, hired to do their job to keep their paymasters safe from having to pay their taxes and to continue making money from whatever corrupt sources they see fit.

They think that tax is only a reality that the rest of us have to get along with.

If the UK isn’t out of the EU by Jan 2020, who knows what may become of Johnson, Gove, Moggs, Farage?

They have been promising some very rich and ruthless criminals that their money would be safe from the scrutiny of Pan-European Financial Intelligence Units and in January they will have broken their promise.

As the scrutiny continues from January onwards, who knows which dark money derived from illegal arms sales, drug running, people trafficking and hideous human rights abuses will get linked to prominent figures in the British establishment, and particularly the Conservative Party.

These people will not go down without a fight, and the undermining of our democracy and the auto-destruction of the Tory party may only be the overture.