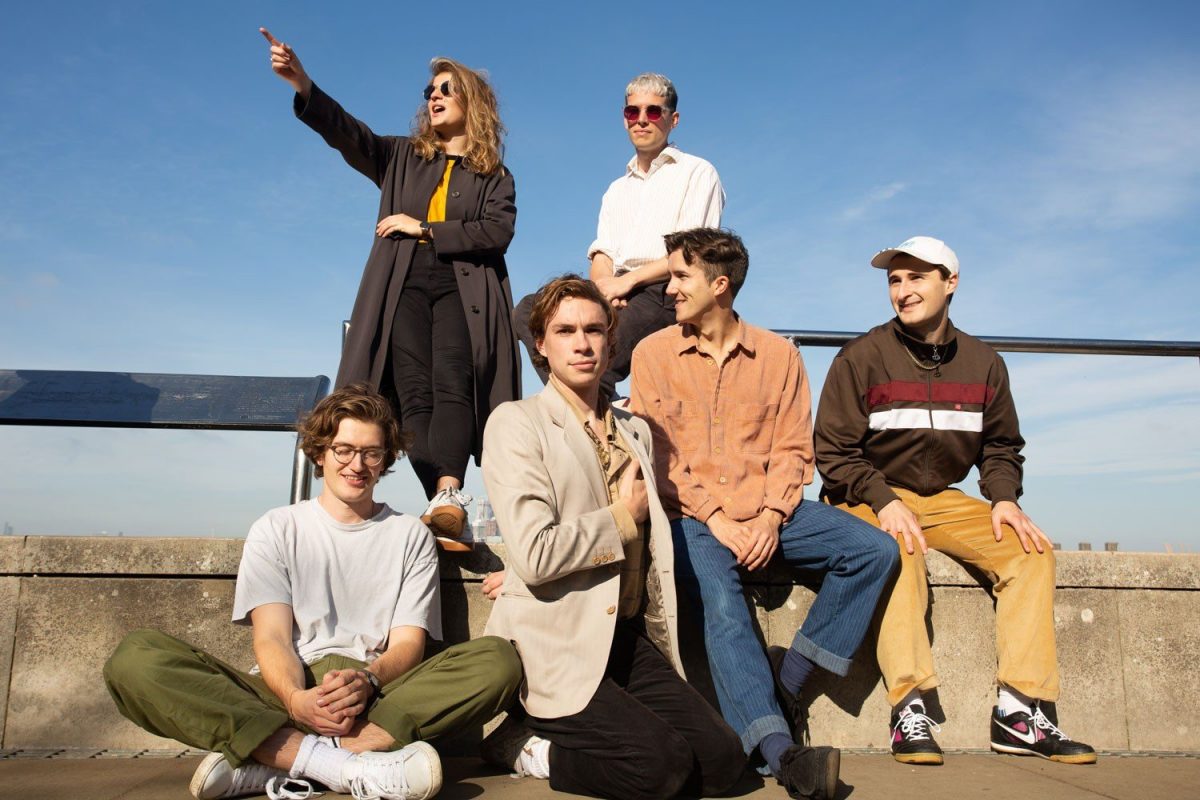 As 2020 descends into even more uncertainty, Getintothis’ David Hughes provides us with the known certainty that there is still great music coming out for the pleasure of your ears.

As the UK prepares to open up shops again as early as next week, albeit with social distancing measures, the question still remains, when will the music industry be allowed to restart?

I don’t know about you, but we’re starting to feel a bit impatient about the fact every other industry appears to be opening up, or at least have a plan of action for start up, while we in the music industry have been left waiting and wondering.

From as early as next month, if not sooner, people will be allowed to see a giraffe at the zoo, have a pint in the pub (albeit two meters away from their mate) and attend a drive in movie in a car park, all while wearing that brand new t-shirt they bought from Primark the previous day.

Yet, the biggest source of entertainment for some, gigs and festivals, have neither a timeline for start up, nor a plan to safely resume.

Surely the government realises how important the music industry is? Try turning off any source of music for a day and see how massively affected and boring your day is without it. Music impacts everyone – certainly more so than a monkey locked up in a cage.

But, while we wait for the day that Boris sorts the issue out, here are our top ten tracks of the week that can safely guide you through this lockdown period.

Sports Team have just released their debut album, Deep Down Happy, to critical acclaim, reaching number 1 in the midweek charts, while achieving 6 Music’s Album Of The Day.

To celebrate its launch, they released a video for Camel Crew, which sees a humorous collection of clips of the band in each of their homes during lockdown.

The track itself is stereotypically Sports Team, with punky guitars and heavy drums sitting underneath the singing (or is it shouting?) of lead singer Alex Rice.

While that sounds like a recipe for disaster, the ears are treated to a well-crafted piece of art, which is extremely fun to listen to.

It kind of makes you want to be in a punk band.

Ireland’s post-punk dreamboats, Fontaines D.C., have recently announced a new album, A Hero’s Death, set for release on 31st July. I Don’t Belong is the second single to be launched and is a rather subdued statement of intent from the Dubliners.

I Don’t Belong shares a different approach to their previous records, with lead singer Grian Chatten quoted as saying they want the track to be “anti-‘Big’”.

Big was one of the stand out tracks from their previous album, an energetic foray into the Fontaines D.C. world, whereas I Don’t Belong is anything but that.

Gone are the big angsty guitars and the fast and hard to keep up with rhythm, while the vocals are subdued and reflective. It’s a more thoughtful and monotone look into the Fontaines D.C. world.

But don’t take that as a bad thing, this is a ridiculously good track, which shows that the band can put their hand to different styles and people will lap it up.

Ty Segall and Cory Hanson have released a couple of once lost tracks, She’s A Beam and Milk Bird Flier. Recorded over five years ago, the tracks have finally been released, with money from the first week of sales going towards the Black Lives Matter LA charity.

She’s A Beam could be likened to a five-minute narrative of 2020. It starts at a gentle pace, with gentle yet melodic guitar and vocal melodies, before it finally attacks you and rapidly descends into chaos.

It’s the chaotic part of the song that stands out the most, not only because it’s literally impossible to ignore, but it just sounds like it was a lot of fun to write, record and then play live (remember when gigs were a thing?).

You know that thing you do with your foot when you hear a good song, that’s what you do with She’s A Beam. You tap your foot, before unleashing your most lethal head banging for when the heavier guitar parts kick in. It’s a joy to listen to.

The Letrasets are back with brand new single Fruit Juice. The Liverpool band have taken the momentum from their previous releases, and put it to good use, showing a new level of maturity and song writing ability.

While previous tracks have a bright, summery feel to them, Fruit Juice has a darker feel to it. While that is partly down to the lyrical content, reflecting upon the feeling early in the morning after a night of consuming far too much alcohol, musically the track takes the bands summery, jangly sound and gives it a darker feeling.

We can’t wait for gigs to come back post lockdown, and to be able to hear songs like this live is one of the main reasons. Stick it in your summer playlist.

First Cut is the second single from Sindy, for his forthcoming Hits For Kids EP, which comes out on 19th June. The Sindy project comes from Stockholm based musician Tom Serner, bringing a quick, two-minute outlook into his dream pop sound.

Perfect for this glorious weather we’re having lately, First Cut provides a strong mixture of gritty guitars, a solid electronic rhythm and toy keyboard sounds, to give this track a magical summery vibe.

Mix that with Serner’s falsetto in the chorus, and this is a track to be reckoned with. It’s one of those feel good tracks that you’ll have on all of your summer playlists. We just wished it lasted a bit longer.

Everything’s Changing is the latest track to be released from Aime Simone’s debut album Say Yes, Say No, heading for release on 31st July.

The Berlin based artist has an interesting back story, which includes throwing a journal at a performing Pete Doherty, which subsequently led to song writing sessions in Doherty’s house.

Simone soulfully winds his way through this electro-acoustic ballad, reflecting on his immortal way of life as a teenager, to the acceptance of mortality as an adult. His gentle voice simmers over the top of the minimalistic instrumental, before kicking up in the chorus as the electronic beat ensues.

With Coronavirus hitting the music industry hard, many artists have postponed album releases till after the pandemic is over, Norwegian six piece Wardruna being one of them.

However, they still wanted to release new music, and we have been blessed with this magnificent creation.

Much more than a song, this is an eight-minute audio-visual experience, taking you on a journey across the Tustna mountains in Norway.

Each shot of the video is like a cinematic masterpiece, but not to be outdone, so is the track. Atmospheric, repetitive, melodic, Lyfjaberg is based upon Norse mythology about the ‘healing mountain’, which provides a place of comfort for the ‘sick and sore’.

The bold, repetitive percussion, underneath the harmonious Nordic chants, allow the track the ability to get stuck in your headk; you’ll definitely be chanting it to yourself later when you’re trying work.

Stubborn Fire is the latest track from Glasgow based Zoe Graham, collaborating with bedroom producer Blicero.

Having supported the likes of Kate Nash and Rae Morris earlier this year, Graham has a strong foundation to build upon with the release of her debut EP, Gradual Move.

Separate from that EP, however, is Stubborn Fire, an energetic and fun track, designed for the heights of summer – when we finally get one.

Being the last project the pair worked on together on before lockdown, Graham decided to release the track, giving a glimpse of positivity to anyone who listens.

The track has an interesting soundscape, with the main instrumental melody provided by (correct me if I’m wrong) glass chimes and a toy keyboard, with atmospheric bird sounds sitting behind it all.

It sounds inspired by the likes of Mura Masa and Sylvan Esso, which only adds to the appeal. You’ll probably hear this one on the radio sometime soon – and you’ll definitely be dancing along.

Kidsmoke are set to release their debut album, A Vision In The Dark, later this month on 19th June, via Libertino Records. The Welsh four-piece have given us one final look at it before its release, with this gem, Layla’s Love.

Layla’s Love is the perfect soundtrack to your summer road trip, with its summery atmosphere emphasised with jangly guitar melodies, against peaceful, harmonised vocals.

Telling the story of a past relationship, Layla’s Love addresses the many ‘what ifs’ of a relationship. The clever use of the female vocal within the track allows the imaginary conversation the main character has with Layla to come to fruition.

It’s easy to imagine this song being in a feel good rom-com film, it definitely deserves to be.

Becca Mancari teases more new music from her sophomore album, The Greatest Part, set for release on 26 June. Lonely Boy is the third single to feature from the album and is a magical, trippy mess (in a good way).

Lonely Boywas based around Becca’s dog, who was a rescue dog with severe anxiety and depression. While looking at her dog, she realised she shared some of the same attributes, which helped form the song further.

The intro of the track has almost sample sounding guitar patterns, while it sounds like Becca is chatting to someone on the phone, reflecting upon being lonely.

Once the song kicks in, the simple and rhythmic guitar patterns continue, while her soft and pensive vocals provide most of the melody of the track.

It all feels rather trippy, certainly emphasised by the animated video of dogs doing weird things on screen, but it’s the perfect alt-pop track for feeling lonely during lockdown.