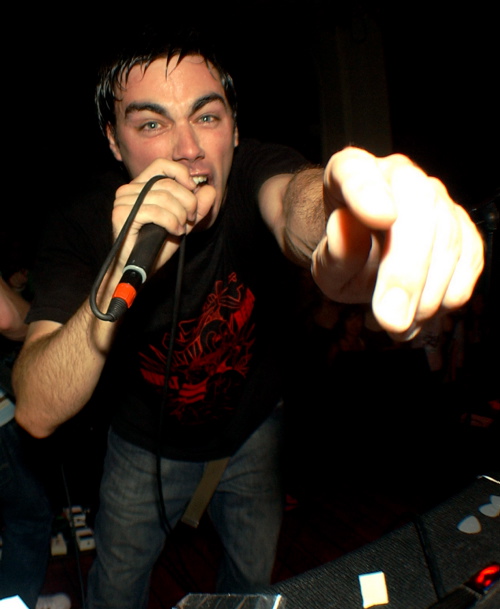 Hard-Fi reckon the long-player is a spent force and that artwork is now a nonentity reduced to a tiny graphic on Mp3 players, so on their forthcoming record they’ve decided to ditch a cover illustration in favour of a slogan stating…

…NO COVER ART.
The ‘Staines massive’ have also revealed that the ‘artwork’ for forthcoming single, Suburban Knights, will feature a plain black background, with ‘EXPENSIVE BLACK AND WHITE PHOTO OF BAND NOT AVAILABLE’ written on the front in yellow writing.
How utterly ridiculous. Not only is this a cynical attempt at marketing their woeful brand of third-rate grot-rock but it’s also an exercise in plain stupidity for their new record will have cover artwork – it’ll just look utter cack.
“We wanted to break the rules,” blathered frontman Richard Archer last week. “We don’t need some airbrushed band shot just because it might be expected. F*ck that. This is about the music.”
No Archer! Just no. How is having a vomit-yellow coloured square with ten letters on it breaking the rules? How is sloganeering ever about the music?
Surely including a bland picture of their ugly mugs on the front cover would have let listeners do the listening, without being mildly distracted by the head-scratching poser – ‘is this a cover, or is this not a cover?’
And anyway, it’s not the actual cover design, I have a problem with – after all this idea is hardly new and has been adopted more successfully by various artists beforehand while others have shunned any image, or text, in favour of nothing – see Princes’ Black Album for one.
The fact is cover art is a vital part of record buying – and it should never be relegated to something as unimportant as Archer suggests.
While I wouldn’t imply cover art is ever a guide or reflective of the quality lying within, there’s always been a great connection between some of my favourite bands and their very selective choice of artwork.
Take The Smiths and their use of iconic cult figures from the silver screen, Pink Floyd’s conceptual images, or John Squire’s Jack Pollock rip-off spatterings adorning the Stone Roses’ singles and debut record.
Cover art work should never be dismissed or sniffed at, I wish I could say the same about Archer’s brand of music.