Move over Flaming Lips, there’s another set of bible-belt cosmonauts on the block…

Evangelicals: The Evening Descends – Album Of The Week
Dead Oceans
Whatever happened to The Flaming Lips? Remember way back, when they seemlessly melded the paths of goofball schlock with revelatory spiritual profundity culminating in 1999’s all-conquering masterpiece The Soft Bulletin – a record which seemed heaven sent in its measured completeness.
Now, what with Steven Drozd off the gear and assuming musical control and Wayne Coyne knee-deep in garbage from his garage in search of a new prop for his never-ending quest to complete their forthcoming cinematic alien opus, Christmas on Mars, the music seems almost secondary – especially when considering the lacklustre ventures post-Soft Bulletin.
Thank heavens then for Evangelicals. Cut from the same cloth as the Lips – and residing in their hometown of Oklahoma City – The Evening Descends offers a wealth of playful madness which is impossible to ignore and all the more fun unravelling its many layers.
Exemplifying their talent for lunacy is Party Crashin’; opening with desperate cries of help from a hospital bed as a patient drifts to their death, we’re whisked via ambulance sirens to a world of ECG buzzes, phaser keyboards and plucked acoustic guitars trading with glamtastic electronics.
Better still is Skeleton Man; a rollicking ride through mystical atmospherics and Pink Floyd guitar theatrics.
The Floyd link extends to Here In The Deadlights which could easily be shoe-horned onto Darkside of the Moon with it’s echoplex dynamic.
Such is their fervour for ideas sometimes the whole experiment comes across like a Jackson Pollock number where your ears are spattered and clogged with an inspiration overload – indeed during How Do You Sleep a wad of slime is spurted into the speakers.
But only a fool would knock ’em, for their scope never loses sight of their main goal – to entertain and dazzle with a heady rush of psychotic abandon.
For fans of: Chaos and disorder. Zombie flicks.
8/10

Instruments Of Science And Technology: Music from the Films of Richard Swift
Secretly Canadian
Californian Swift is better known for touring with Wilco and releasing the much-revered The Novelist/Walking Without Effort, but Music… finds him shape-shifting into some form of Eno-hybrid splicing ambient with electro-minimalism and home-taping.
A shopping list of genres (kraut, dub, funk, electronica, Bavarian nose-picking) are on display but for the most part the letters O and K are the record’s only constant. Great for washing the dishes to.
For fans of: Whiteboards, pen-chewing, physics.
5.5/10

British Sea Power: Do You Like Rock Music?
Rough Trade
Do you like rock music? Yeah, I love it. Especially big, fuck off AC/DC anthems like You Shook Me All Night Long.
What I don’t dig is puny musicians pretending to be historians dressed like barn owls with weedy string sections whining about Polish taxi drivers and force-feeding me lyrical insights into Eastern European politics. You dig?
For fans of: Twigs.
5.5/10

Dan Deacon: Spiderman Of The Rings
Car Park Records
Dan Deacon is to music what Timmy Mallet was to art.
He may look like a grade A twat but don’t let that fool you – there’s more than a modicum of talent beneath that dickhead veneer.
Spiderman Of The Rings sneaked out with little fanfare last year, but it’s synthesis of ecstatic electronics and DIY digitalism is much-deserving of wider recognition. The experience is kinda like listening to a console game malfunctioning while lost in psychosis as Beck‘s force-feeds you sherbet dips. Ace while it lasts, but you may need a lie down afterwards.
For fans of: Kids TV, space-hoppers, swing-ball.
7/10 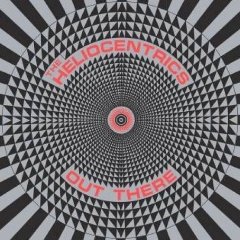 The Heliocentrics: Out There
Stones Throw/Now Again Records
In 1968 David Axelrod penned the definitive jazz-pop boogaloo Song of Innocence. In 1993 DJ Shadow resurrected the Axelrod sound with the sample-led classic Endtroducing.
In 2008, Heliocentrics (the band that backed Shadow, and led by superstar beatmaster Malcolm Catto) are reprising that sound. Problem is, for all the 24 tracks on show diddly-squat sounds fresh or exciting and all you’re left with is the impression that sometimes super-hero musicians don’t half make dull records.
For fans of: Double-bass solos.
3.5/10