Matmos: Supreme Balloon – Album Of The Week
Matador
Leftfield electronic duo Matmos have retreated into electro-nostalgia on their latest LP and abandoned all sampling – but don’t worry, it’s not a form of neo-Luddism – instead they’ve amassed enough vintage synths from the 60s, 70s and 80s to fill and operate Spacelab (before it was shot out of orbit by a UFO of course).
The opening three tracks are short, playful electro-pop pieces, alternating between energetic and ethereal, that will please any Kraftwerk fan.
The music slowly morphs into more abstract and unnerving territory, until track five, Les Folies Francaises, which appears to be a homage to Wendy Carlos‘ electro-classical soundtrack for A Clockwork Orange.
After that, we get the title track and keystone of the album: a 25-minute cosmonautical epic ÃÂ  la the original space-rock shamans, Tangerine Dream and Cluster.
It’s highly textured, fluid and never overly repetitive – it promises a pleasant trip for anyone willing to let it seep slowly into the frontal cortex.
For fans of: Tangerine Dream, Goblin, Biosphere
8/10 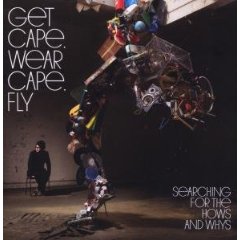 Get Cape. Wear Cape. Fly: : Searching for the Hows and Whys
Atlantic
Sam Duckworth‘s latest album has been much anticipated in the emo-scene. That’s whether you’re emotional about existential angst, or – as in Duckworth’s case – intolerance in the international community.
Opening track Let the Journey Begin starts with a catchy melody and some nice sampled horn sounds, but as the album progresses this becomes a recurring and overused device.
At first I tried to convince myself that it was merely subconscious word-association that made me think of McFly, but I eventually realised that it really does sound a lot like that.
Song titles like Children Are (The Consumers) Of The Future show that Sam Duckworth is all about making a difference, but what that difference is I don’t really know, beyond being a palliative for the already converted congregation.
Formulaic pop is the norm here, which makes me think that GC.WC.F is just an attempt to sell electronic folk to the pop-punk crowd.
For fans of: Men with laptops and a big heart. The Frankfurt School of Social Research.
3/10 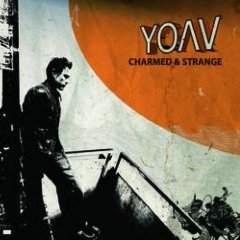 Yoav: Charmed & Strange
Universal
Singer-songwriter Yoav‘s debut album opens with a strong electro beat that almost sounds like Nine Inch Nails, except that the angsty screams are replaced by soft, sultry indie-pop vocals.
It quickly becomes apparent – on tracks like Club Thing and There is Nobody, with their disco interludes and faux-seductive singing – that this is an attempt to make Justin Timberlake more credible and do it with a smaller budget.
Highlights are Live which has some interesting passages reminiscent of Pink Floyd’s Animals, and Angel and the Animal with nods to Jeff Buckley.
Ultimately the album drags through ballad after ballad to a close.
For fans of: Justin Timberlake, chill out music after a night on the tiles.
4/10

Tapes N’ Tapes: Walk it Off
XL
Tapes N’ Tapes are a massively hyped indie band whose first album was said to signify a rebirth of American rock.
For their second the production remains very much in line with US lo-fi – jarring guitars, drowned out vocals and keyboards plinking away beneath the fuzz – but really they are American in other ways. I’m thinking of more polished bands like The Killers, with anthemic vocals and Salvation Army drumbeats.
It does start and finish well, if you happen to suffer from mid-album narcolepsy, as opener La Ruse and finisher The Dirty Dirty are the most exciting tracks on the record.
The washy, noisy production and weird levels might be ‘lo-fi’ superficially, but it often hides weak songs that don’t fit together into a coherent whole.
For fans of: Modest Mouse, The Killers on a radio with bad reception
5/10 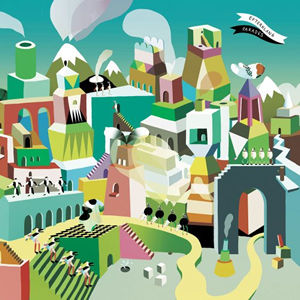 Efterklang: Parades
Leaf Label
First track Polygyne opens with an icy sea washing around rocks. You’d be forgiven for thinking we were in Flight of the Snow Goose territory, until dissonant jazz and distant rumbles suggest some rupture in the night, a storm at sea and a shipwreck. It sounds like debris washing on the shore, and it’s for the rest of the album to tell us what happened.
In the second track, Mirador, light rain starts to fall but doesn’t yet cut through the sunshine. This is probably the most optimistic track on the album, revealing the parades alluded to in the title with nursery-rhyme vocals and bandstand horns.
There’s a glitchy beat as well, interspersed by violins, which shows the extent of Efterklang‘s influences.
The parade hasn’t ended when we get to Horseback Tenors; you can imagine a marching band playing for the Danish Royal Court, interrupted by a post-rock band next door, which makes comparison to Sigur Ros inescapable. It’s not entirely up beat though; baleful bass still rumbles in the background.
From track six onwards the album gets darker and darker. Frida Found a Friend is an intense, gloomy epic, mixing touches of Godspeed You! Black Emperor with the dark ambient of Coil, and it only gets more industrial and doom-laden with the next track, Maison De Reflexion.
The album reaches it’s dramatic peak with Caravan, when guitars and glitch return to the fore, before washing away with the reflective Illuminant and post-indie fadeout Cutting Ice to Snow.
After Sigur Ros, it might seem clichÃÂ©d to read Scandinavia music as an expression of the local landscape, but perhaps this lies at the door of Efterklang, who have a produced a cold and gloomy album that can’t fail to suggest the ice and loneliness of Hyperborea. It’s textured and interesting, the tracks are short and avoid repetition, but definitely one for the dead of winter.
For fans of: Sigur Ros, funeral dirges, glaciers.
7/10

The Breeders: Mountain Battles
4AD
It’s been another long wait for Breeders fans, and many will get what they expect with Mountain Battles – a pleasant mixture of punky lo-fi, some meandering reflection and doses of Americana, garage-rock and European high-culture.
There are some sharp and punchy garage-punk tracks, like Bang On and the excellent German Studies, which has lyrics in German. Cultural pluralists need not worry though – Regalame Esta Noche is in Spanish.
The majority of the songs are slow and spacious – such as Night of Joy and Suffragette-inspired We’re Gonna Rise – not exactly ballads, but reflective and melancholic nonetheless.
As usual with The Breeders, there are tracks such as Walk it Off, that point back to The Pixies as if time stood still.
Kim Deal seems to be writing songs that she wants to write, without much concern for whatever fad is popular at the moment, but that means there isn’t really anything to indicate progress or stand this apart from the last album, Title TK.
For fans of: The Breeders. Classical feminism as opposed to post-structuralist variants.
6/10