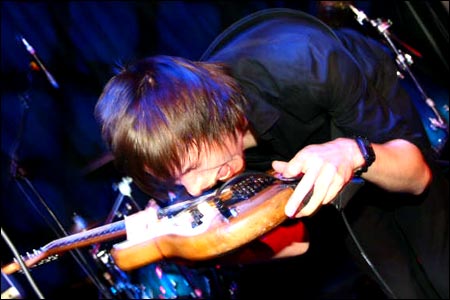 Everyone into position. It’s Britain’s best live band. And they’re better than ever before.

Deep breath… Again. Deep breath… Again. Deep breath… Breathe…
It takes minutes to fully return to earth after an Oceansize gig. The heart pings round the breastbone like a squash ball slamming against the chest, lungs pumping, bulging, racing, inflating ’til they’re ballooning. The head swamped with blood – rush after rush of thrilling highs and releases, limbs creak and thrash while the throat runs ragged and hoarse, as neck veins bulge to the max.
The process is akin to running too fast, you’ve overtaken yourself. Out of control but careering into spiritual ecstatic plateaus of joyful dementia. Thrilling doesn’t come close.
Quite literally, no band can match Oceansize on stage. Their sheer investment to detail, craft, technical skill, quick-wit, charisma and a sound that could shatter the Heavens is unequalled.
Their sound is sometimes beyond space and time – a scale so magnified that punters inside Liverpool’s Academy are shaking by the blast. A gig veteran next to me massages behind his lobes throughout Sleeping Dogs & Dead Lions such is its crazed volcanic eruption of leaden propulsion. All the while he’s smiling but clearly his head is completely zonked.
See, Oceansize, (as has been said before, but it’s worth emphasising), make music fitting of their name. They’re vast, endless, titanic, dismantling the senses with sonic warfare which can be as punishing as it is blissful.
They wouldn’t be out of place plying their trade atop the pyramids if they were transported to cloud level by a chariot of winged Pegasus’ with an amp stack the size of the Great Wall of China.
Take Unfamiliar tonight’s kick off, after the doom-laden intro of ambient glitch-rock, which sees Mike Vennart (sporting his trademark red shirt, with nifty braces, pin-stripe grey kecks and jazzy turquoise socks) leading the three-pronged guitar assault as Steve Durose adds exquisite harmonies, the perma-stoney faced, enigma that is Gambler waging war to his axe while rhythm section Steven Hodson and Mark Heron lay waste to their kit. All five hurl and throw themselves into action like combat marines while swapping instruments and trading sounds and effects – its knackering and astonishing.
And the pace is to perfection. The one-two hammerblows of Unfamiliar, and One Day All This Could Be Yours – a track so devilishly sexy it should soundtrack an ad for the darkest, richest chocolate which comes specially wrapped in S&M packaging – are followed by the Floydian liquid-like ambience of Trail Of Fire as Gambler lets his heavily tattooed forearms dance up the keyboard.
Just as you’re catching your breath after a stunning rendition of the hymnal Music For A Nurse, they train crash your mind with the blow-out single from 2003, Catalyst, (Vennart cheekily reminding us all of it’s non-chart-denting impact) and a quite remarkable version of A Homage To Shame.
The latter a track which seems somewhat indistinct amid the overblown riot that is 2005’s Everyone Into Position, an album which had so many highs, but so much going on, you needed a lifetime to absorb it’s labyrinthine ideas, but tonight the track equates to sheer brilliance in an Isis + Pelican x Porcupine Tree = WINNER kind of way.
Impossibly they better all this with their epic masterstroke, Ornament/The Last Wrongs, a song so beautiful, so magnificent, so transcendental it seems somewhat daft to think five lads from Salford came up with it.
From choral washes of keys and playful licks, Durose adds layers of vocals as Vennart pours his soul out, singing a top – ‘Trace the trail and follow you wherever you will lead me, To the heart of me and your spilling grief, To answer to a God who never answers you…‘ – before all four guitars crash in unison.
The wall of beatific noise spills forth for over ten minutes before all five walk off amid calls for more. Really, some people could be given the world and still ask for more.
On tonight’s evidence Oceansize, ten years and three albums in, are improbably bettering themselves in every way and for a band creating dark, mystical magnum opuses at every turn it’s truly inspirational to wonder what they will come up with next. 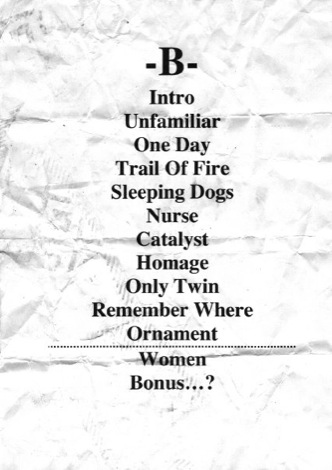 Setlist: Note they didn’t return for the encore : (