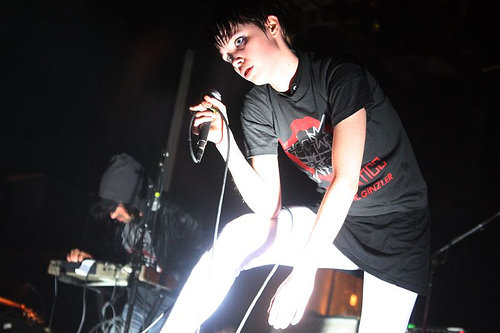 According to NME Crystal Castles are the 10th most important people shaping the future of music. They’re not.

The simple fact is they’re a great advert for now. But like the hype, tomorrow they’ll be out of date.
It’s little surprise to find the Toronto duo, who grace this week’s NME cover, are also headlining the magazine’s New Noise Tour – a case then of you scratch my back, I’ll scratch yours…
Tonight’s gig – what we can remember of it, having got hideously wasted on the ÃÂ£3 a pop Nation bottles of Becks and a late night session at Le Bateau – is an oddity.
Firstly, as it’s under the banner of Skins Live, there’s a mountain of young – very young – hopefuls in the crowd, dressed up to the nines aiming to impress E4 staffers who mill around with cameras, clipboards and uber-fashion accessories which distinguish them from us: The Plebs.
Some wannabe Cassies even clutch scripts while lining up for an audition in a booth off to the right of the stage. Some, go that step further and sack the music off altogether, instead choosing to hang around the security guards upstairs presumably offering their lips in return for a quick session with producers lingering backstage. It’s not going to happen.
All of which makes the music seem a tad inconsequential. This is magnified by the fact that things kick off with DJ Hellraiser who’s completely forgettable, so much so we sit down next door and talk about work. Urgh.
Things get mildly interesting when Ladyhawke takes to the stage to blend her synth-led indie pop. There’s a very definite nod to Fleetwood Mac, which is never a bad move. But like much of tonight, it all feels slightly underwhelming.
That’ll be the sweet smell of hype.
Speaking of which, Crystal Castles enter through a thick smog of dry ice and suddenly a throng gather at the lip of the stage and it becomes apparent we are actually at a gig.
Like all next-big-things they certainly look the part; noise-maker Ethan Kath hides beneath a leather jacket, hoodie and his deck of battered synths and tech-boards while spindly vocalist Alice Glass is cloaked in black with a sharp black bob to match.
For 30 minutes they crank up a thrash, glitchy death-disco which is akin to the sound Spectrum computers made while loading games. It’s the very opposite of Razorlight which is always a good thing.
Alice Practice is by far the standout with its breaking glass electro clatter as Alice attempts to scream above the din.
You barely hear her at all.
Similarly later on, when backstage she doesn’t say a word while E4 film the duo dribbling beer down their chins for promo shots.
Bizarrely, Skins head of music Alex Hancock – the 24th most important person in music according to the aforementioned magazine’s list – is here too, sporting a large bandage on one eye.
All of which is fitting for a strange night which was good, not great and certainly not the future.
Hear Ladyhawke here.
Hear Crystal Castles here.