REM live in their early years

Their definitive album tuned out to be their first, Getintothis’ Peter Guy reflects on REM’ s perfect opening, enigmatic statement of intent.

Shiny Happy People is probably where it all began. Those shiny, happy chords dressed up in shiny happy melodies sung by shiny happy people holding hands.

It’s probably a good thing that I was still a teen and had yet to develop the cynicism of a seasoned music fan which may have turned me off REM forever.

And so it was that Out Of Time‘s huge pop hooks weaved their way into my record collection spiralling a feverish appetite for all things Rapid Eye Movement.

And it wasn’t long before curiosity found me digging through my dad’s tape stacks to find 1983’s debut offering Murmur.

Of course I’d spotted it before, wedged in between the likes of Camel, Led Zep, Genesis and The Alan Parsons Project, but its murky, uninviting cover failed to catch the eye and one quick listen refused to reveal its hidden treasures.

However, several years later, and with Automatic, Green, Document and a debut concert at Huddersfield’s McAlpine Bowl in support of Monster under my belt, I was ready to fully feast upon Murmur‘s ambiguous riches.

Second time round, and revisiting Murmur was far from arduous – quite the opposite – it was like entering an enigmatic wonderworld; complete with dreamlike surrealism, lyrical coded messages, fantastical imagery – and an indecipherable voice seemingly beamed in from planet Mumble.

A tune so garbled, so WTF, I couldn’t help raise a smile. I was no stranger to Michael Stipe‘s remarkable warbling, but this was something else – the guy sounded like he was either half-cut or borderline special needs.
I mean what on earth does this mean: ‘Put that, put that, put that up up your hole, Baptist isn’t country at all, ready station, decide yourself, straight off the bone, where to go… Calling out in the trenches!‘
Hardly Shiny Happy People.

But it was exactly this ambiguity set to a breakneck backbeat and Peter Buck‘s dancing arpeggios that proved Murmur‘s winning formula; by blending ultra-catchy riffs with a web of vocal intrigue you had the perfect marriage of tunes and mystery. Surely that is music’s very essence: magic and excitement.

As a result it became a staple during my late teens and University days. Trips to northern France, Amsterdam and to-ing and fro-ing from Liverpool Lime Street Station to all corners of the British Isles were aptly accompanied by Pilgrimage‘s offbeat rhythmic jolts and Stipe’s guttural roaring about two-headed cows. 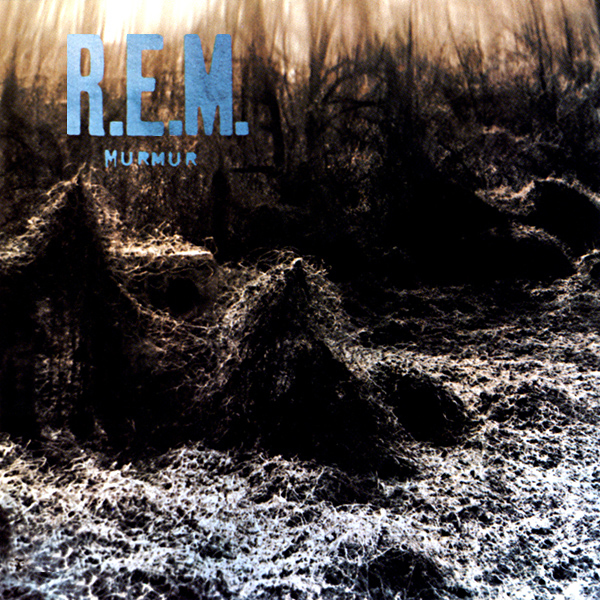 The raw, uptempo nonsense of Shaking Through (remember that odd final 30 second coda of lolloping beats and bizarre guitar strums) and classic Sitting Still were regular headphone accompaniments while making the long trek from halls of residence to the lecture theatres.

One quick blast of West Of The Fields had me punching the air and singing so loudly inside my head – albeit the only words I could make out (‘Dreams of Elysian…’ Eh!?!) – all thoughts of a tedious two-hour lecture on Carl Jung‘s Literary Theory quickly subsided.

Perhaps the reason why Murmur struck a chord so deeply was due to the symmetry in which the band recorded the record and that of my own life; the band and myself were just out of college and the lust for life and the excitement of finding your feet – on your own – resonates throughout.

Check how many references there are to youth, innocence and struggle. 9-9 with Stipe’s growling confession to ‘conversation fear,’ Catapult‘s reflection on childhood, We Walk‘s nursery rhyme-like stroll and Laughing‘s post-punk pop about messed up relationships. Or something?

Whatever Stipe‘s meaning, there was always a great source of pleasure in mapping out your own take on each song with centre-piece Perfect Circle encapsulating this beguiling perplexity.

I remember seeing them on MTV’s Unplugged (see above) and their performance of this track, despite Michael’s ridiculous raincoat and floppy hat, was utterly spellbinding and yet – as is always the way with Perfect Circle – distracting in the sense I could never work out what on earth ‘Standing too soon, shoulders, high in the room,’ could possibly mean.

Who cares, like the rest of Murmur, the fun was in translating your own thoughts and finding raw emotion in a record REM have never bettered.

Discover the secrets behind the lyrical maze of REM’s Murmur.