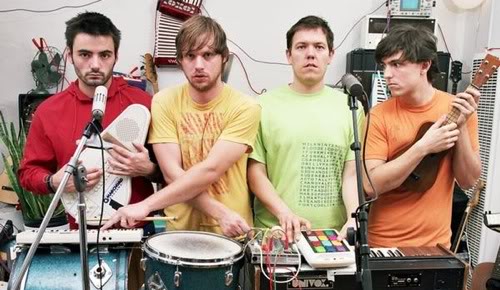 It would be fair to say we’ve never watched a gig underneath a bed sheet.

But that’s exactly what happened when LA’s The Mae Shi crashed landed in Liverpool.
Midway through a set which made the now-defunct Blood Brothers appear pedestrian, the six-piece – who had already swung from every speaker stack, paraded in and out the audience and dangled their legs from monitors like giddy l’enfants terrible – magic up a huge cotton bedspread and drape it over across the crowd to play under. Much to the delight of everyone involved.
It brings new meaning to the phrase giant love-in.
See, like their avant-punk forefathers Les Savy Fav, the Californians embrace performance like few others and audience participation isn’t optional – it’s expected.
And just in case you’re reluctant they hand out their guitars and drums to onlookers to fill in the gaps as they join in unison to huge choral yelps.
Oh, and no need for the assistance of microphones – nah, they’re for beginners – this lot sound like the Beach Boys on Dexedrine, happy to hug each other while bellowing their lungs out in perfect harmony.
Manic time changes sees aggro-punk weave seamlessly into electro-pop with instant hooks before quasi-prog dance completes the preposterous circle of noise on offer.
The whole experience is akin to watching six smiley cartoon tornados fizzing round in fast forward. It’s unstoppably exciting and hugely uplifting.
Bottling the Mae Shi should be a government exercise undertaken immediately. The only question is can you overdose on fun?

The Mae Shi: Run For Your Grave. Taken from HLLLYH out now on Moshi Moshi Records.
Earlier in the evening much-championed Johnny Foreigner thrilled and infuriated in equal measure.
While there’s simply no escaping the scattershot technical brilliance at work from the Brummie trio; guitarist Alexei Berrow is sodden wet seconds into the opening bluster such is his finger-tapping fret mastery, yet they’re one of a cluster of bands weaving a mathrock-lite meets indie-emo sound of choice that to stand out you simply have to be, well, insanely good.
And Johnny Foreigner aren’t.
There’s numerous reasons to watch, not to mention the punk funk workouts from Junior Elvis Washington Laidley (what a remarkably fine name) and bassist Kelly Southern, but to avoid becoming ‘just another band’ JF may just have to do something slightly unexpected. Like bring their own bed sheet.

Johnny Foreigner: Eyes Wide Terrified
Completing the hat-trick of hip, were Norway’s The Lionheart Brothers; one part Byrds jangles, one part Spacemen 3 sonic boom.
Like their Scando brethren Soundtrack of Our Lives or Dungen, the Brothers are unashamedly retro – all beaded necklaces and sequined shirts, not to mention their psychedelic soundtrack wafting from on high – but it’s performed with such aplomb and endeavour that you’re rarely left feeling cheated or bemused.
Best of all is when Morten ÃÂby takes it upon himself to almost trash the stage during an incendiary climax as he stabs his fender into the monitors and giving the mic stands a thudding crack before exiting stage right.
All of which on any regular night would have been a show-stealing display. But then, no-one accounted for that bed sheet.

The Lionheart Brothers: 50 Souls and a Disco Bowl taken from the album Dizzy Kiss on Racing Junior.