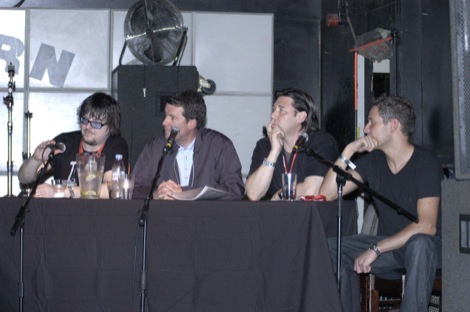 From along the M62 they came to pit Merseybeat against Madchester and Liam against Lennon to settle that age-old question – what’s the coolest musical city? Alistair Houghton investigates…

The great Liverpool v Manchester music debate took centre stage in the Cavern yesterday as part of the Liverpool Sound City conference and music festival.
And short of Morrissey challenging Macca to a gladioli-swinging contest it couldn’t have been a livelier affair, with the debate swinging from passion to humour with just a few barbs and insults along the way.
Leading Liverpool’s attack was The Farm‘s lead singer Peter Hooton.
He said: “If you were based in Manchester in the 1960s and growing up there you looked enviously at Liverpool and Merseybeat.
“Ever since then there’s been a real inferiority complex coming from that end of the M62. Everything Liverpool has tended to do, Manchester has tended to copy.
“The biggest band ever to come out of Manchester was Oasis, who are basically a watered-down version of Slade, who were a watered-down version of The Beatles. They say imitation is the sincerest form of flattery.Ã¯Â¿ÅÃ¯Â¿Å?
Hooton said the two cities boasted different musical styles, with Liverpool sense of romance and storytelling up against Manchester’s harder-edged viewpoint.
Hooton said: “If you’re going to do the analogy, Liverpool is more Keats and Manchester’s more Milton.
“Echo and the Bunnymen went to Snowdonia and were pictured next to waterfalls. Manchester bands tend to stand next to derelict buildings. That sums it up.Ã¯Â¿ÅÃ¯Â¿Å?
Later he said: “To me Manchester has always been about black puddings, clogs and morris dancers. Liverpool is about clipper ships and sea shanties.Ã¯Â¿ÅÃ¯Â¿Å?
Liverpool DJ Andy Carroll said his city’s maritime history and exposure to music from across the Atlantic gave it a musical headstart.
But he said Manchester was better at publicising its role in music history, thanks largely to the tireless efforts of the late Tony Wilson.
Manchester producer and DJ Johnny Jay said his city boasted a more diverse musical history.
He said: “We have New Order to A Guy Called Gerald. But there’s even all those bands I don’t particularly like – Simply Red, Take That, The Stone Roses, The Happy Mondays.Ã¯Â¿ÅÃ¯Â¿Å?
Phil Saxe, former Happy Mondays manager and head of A&R at Factory Records, conceded that Liverpool was the “cooler cityÃ¯Â¿ÅÃ¯Â¿Å? thanks to its Beatles mythology.
In a voice dripping with sarcasm he said: “We don’t have the This Charming Man Hotel or the Blue Monday Hotel.Ã¯Â¿ÅÃ¯Â¿Å?
But Mr Saxe, who lectures at LIPA, said the two cities had more in common than either liked to admit.
“I love Liverpool,Ã¯Â¿ÅÃ¯Â¿Å? he said. “Long may it continue to be the Memphis of the North, and long may Manchester continue to be the hinterland and the productive centre of the North.Ã¯Â¿ÅÃ¯Â¿Å?
Hosted by journalist John Robb – who quickly declared his Blackpool birthplace made him a neutral even though he lived in Manchester – the event aimed to prove which was Britain’s coolest musical city.
In the end a show of hands resulted in a draw – looks like the fat lady hasn’t yet sung for this musical debate.