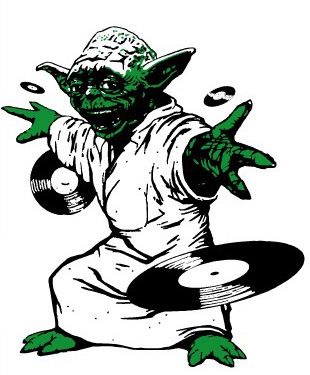 Magic, he hasn’t. Yoda’s force may be on the wane, says Matthew Gordon

Thursday saw a return to the Static Gallery for a night of hip-hop and theatre, which is the perfect venue for hosting this sort of multi-media event.
Three DJs and an arsenal of midi equipment make up The No Fakin’ DJs, offering densely mixed break-beat. It’s lively and pulsing, but at times droning and repetitive.
Better suited to being resident house DJs than sole support at a dedicated gig – but it gets the crowd moving, with people streaming down from the upstairs bar throughout the set.
DJ Yoda comes on after a quick turnover and by then the room is packed to the barn-beam rafters. Yoda crouches to one side almost out of view, with 12 and 7 inch decks and a video mixer, while the projector screen takes centre stage.
The whole set is like his How to Cut & Paste 80’s Edition from a few years ago, using the occasional modern piece of R&B or rock, but sticking mostly to 80s pop, hip-hop and film scores.
Everything is done to stimulate a not-so-ironic childhood nostalgia, with the crowd roaring every time they see a clip from Sesame Street or a sound bite from The Fresh Prince of Bel-Air.
The so-called magic theatre is really just a collection of clips from 80s lad movies, like Rocky and Robocop, and following the mix exactly.
Using video means Yoda can’t just rely on break-beats when he needs a rest, so he uses slideshows of internet chain-mail pictures.
If you’re still laughing at Saddam Hussein in his underwear then this is for you, it’s a surprise there aren’t any cats with Hitler moustaches.
It isn’t to the same standard as full-time VJs, since Yoda’s responsibility for audio and video means he neglects both, and falls back on the style he’d already honed three years ago.