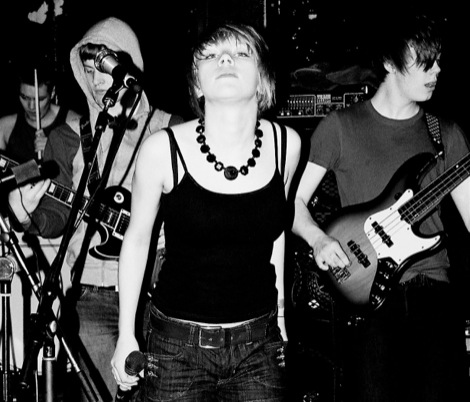 Rolo Tomassi prove once again why their one of Britain’s bright young things on another eventful night at Sound City. Matt Eland digests.

It’s one of those nights where it seems anything can happen – magic hour bathes Hardman Street in ochre light as I arrive at Bumper, for the start of We Need Leads‘ set.
It’s ruined by pissed up chavs prancing like twats to the right of the stage and heckling the guitarist over his curly hair, and it’s clear the band are uncomfortable playing their jaunty indie-funk under such circumstances.
It seems like they could do with a bit more time in the practice room, their drummer in particular letting a few beats slip – but there’s a couple of nice riffs in there.
Clipe Sexo Amador are up next, on the main stage by the door, doing the same kind of thing as Does It Offend You Yeah? and other disco synth bands in the proliferation this year.
They’re okay, a bit of an early nineties rave thing going on, but you have to do something extraordinary to impress in this field these days. Plus, they miss the rhythmic power a human drummer could provide, and I can’t hear the singer’s guitar amp as it’s the same size as a birdhouse.
That said, the last song is a beast, the refrain ‘we met up but had nothing to talk about’ finally getting heads nodding.
After this it’s on to Korova for the Sound City bill I’ve been most excited about.
First up it’s Hackney Carriages, standing in for Real Talk. HC are an odd pair – the Adrian Brody look-alike singer layers keyboard line on top of each other through a loop station, while the drummer, sat on the floor, plays a snare and a bass drum.
It sounds a bit Fuck Buttons, but more song based. Interesting enough, but in need of some serious polish. The sticksman is clearly uncomfortable, his timekeeping a little bit off, and the tunes all end very abruptly, as if they can barely remember them.
It all threatens to unravel during the last song, when the singer switches to guitar, but they juuuust about hold it together. Worth checking out again in a few month’s time.
Next up is the main attraction, and quite simply one of the most stunning bands out there, Rolo Tomassi. Last time they hit Liverpool it was in the cramped Barfly bar – here, they’ve got a bit more space, the drummer isn’t hidden behind a speaker, and they really, really give it beans.
Eva is sporting that trademark shy smile; brother James is twitching around the stage like the physical embodiment of his mad keyboard playing; guitarist Joe is doing his usual gurning, to no-one in particular; and the rhythm section switch from metal breakdowns to discordant jazz with ease.
They’re so polished, so confident, and they’re getting better- all this while they’re barely even 18. Imagine what they’ll be like in a few years time…album out in September. I can’t wait that long.
They’re a hard act to follow, but Cutting Pink With Knives give it a try. They can’t compete with Tomassi’s sheer polished power, so they go for the audience participation route instead.
The singer spends most of the time in the crowd, barging into people – there’s a crowd surfing bassist, a punter’s newly bought vinyl gets broken, there’s incessant heckling of a chap named Andy Ellis…and they eventually win me over.
They remind me of local heroes The Magpyes, in that they play loud, fast grindy-rave type stuff to a drum machine. They’re splitting up soon – this is their last tour, which is a shame.
Last up is I Was A Cub Scout, who always seem to play for a couple of songs too long. It’s good though…the drummer is on top of things as ever, and they seem to have recovered from their recent equipment theft to give Liverpool a decent helping of their summery pop – that record is going to sound great outdoors this summer.
The singer looks tired, even blowing out his cheeks a few times as he tried to decipher the wall of equipment they’ve brought with them (I’m sure they don’t even use half of it) but nothing can spoil the fun.