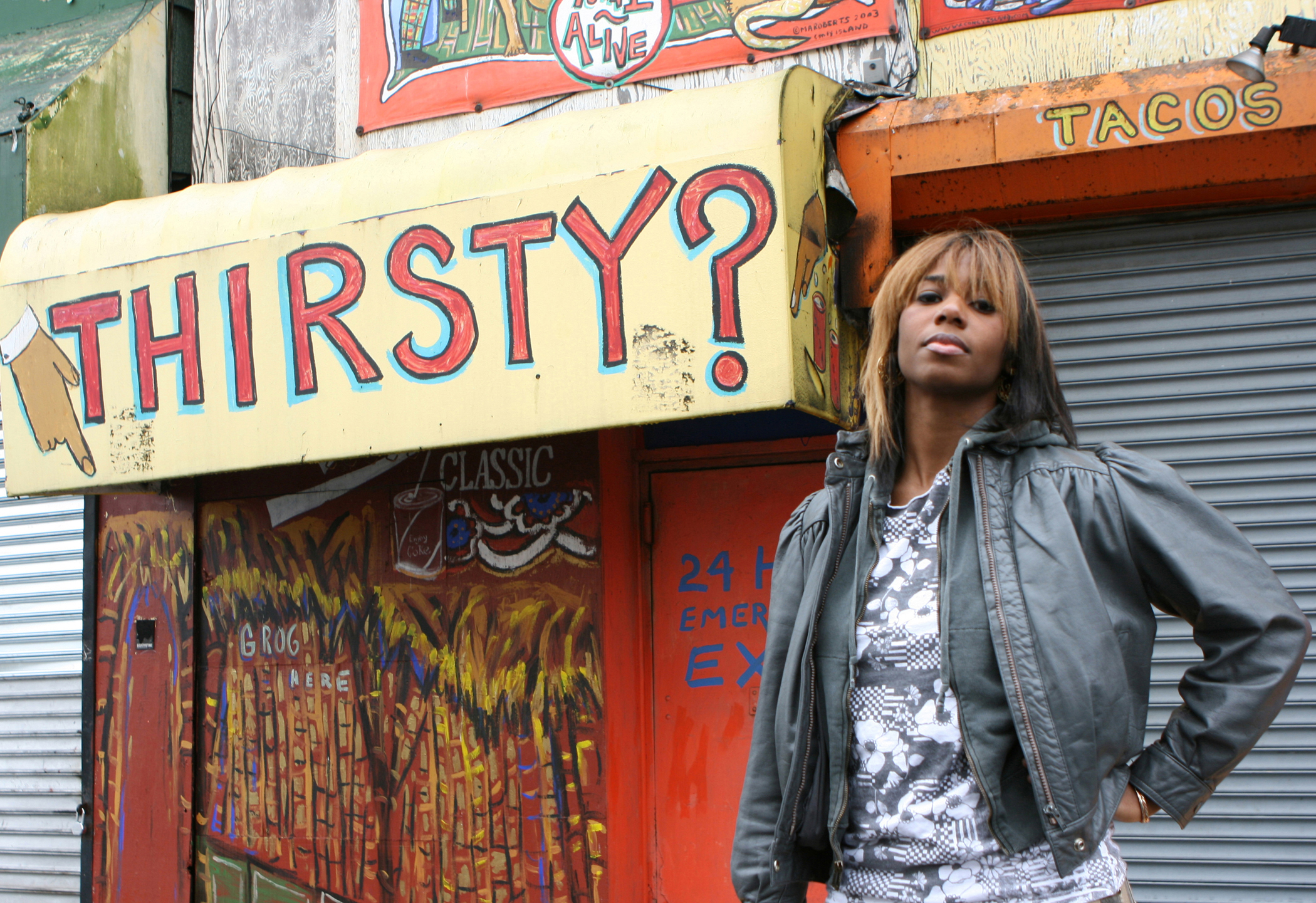 Yeah, yeah, stop your hollerin… So we skipped a week, give me a break, it’s summer and the footie’s on. So here’s a double helping. Get your chops round this lot. 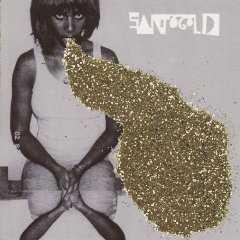 Santogold: Santogold – Album of the Week
Warner/Atlantic
Don’t you just wish you could vomit gold dust? At Uni my good friend Dom was so ‘pure’, or so the girls thought, they reckoned he shat bubbles. It was a myth, he did whopping, hulking messy toilet excretions – and also bought the Daily Mail. Every. Day.
Anyways, Santogold really does vomit gold dust – check out that tasty sleeve for proof – no camera trickery or photoshopping involved there folks; that’s 100% bonafide chunky sparkle vom eruption.
Her other talents include rustling up bonza homemade farmhouse broth, knitting warm woolen jumpers, pub quizzes and churning out glitzy pop nuggets of a remarkably high standard.
What a girl.
For fans of: Wine gums, talking loudly when drunk in clubs on school nights, The Clash
8/10

Black Angels: Directions To See Ghost
Light In The Attic Records
Every time the Black Angels are mentioned my ears prick up like Fiver‘s in Watership Down; they’re whole being elicits excitement – groovy sitar-inflected sludge rock dripping in bourbon-soaked stink emitting 27 different types of feedback and a droney zombie with yellowing skin bellowing through the smoke.
Then I put their records on and I can’t help but feel a tad underwhelmed. They’re not shit, like the latest BJM, but just drone on like a four-week Sunn O))) nodfest without the smocks, and after the sixty minute mark you’re kinda left itching for clarity and a change of gear rather than yet more frazzled stoner boogie.
Three points: 1) Eight minute Never/Ever is white-hot grooveadelica 2) I’m yet to see em live – I wanna see em live. 3) The packaging is marvellous – all embossed loveliness which feels great if you wish to do Primary School-style rubbings.
Remember kids: turn the pencil on its side for greater results.
For fans of: Ian Curtis’ washing line
4.5/10

Irmin Schmidt & Kumo: Axolotl Eyes
Mute
If ever there was a record which frustrates and delights in equal measure this be it.
Fluidity and unravelling of ideas is constrained by a tight mesh of programming; hooks and expanding sonics (check the opening Morricone brass of Kick On The Floods) are weighed down by meandering passages of near-nothingness which instead of transporting you into a state of sensory abandonment can have the tendency to leave you restless and craving those nifty passages of fascination.
Then, and most frustrating of all, there’s beautiful epic expanses of truly mesmeric electronica meets neo-classical jazz weirdness counter balanced by gack gimmickry (Drifting Days, Crime Pays) seemingly produced to soundtrack excerpts of people falling off ladders on You’ve Been Framed.
For fans of: Late night internet noodling, Four Tet, Michael Ballack.
6.5/10
Interview with former Can man Schmidt and Scouser Jono Podmore aka Kumo here. 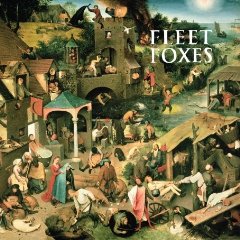 Fleet Foxes: Fleet Foxes
Bella Union
Yep, we know what you’re thinking. ‘He’s not put this LP of the Week, just to be different.’
You’re wrong. There’s a simple reason why this self-titled debut by the Seattle beardos isn’t right up ^ and that’s because it’s good, not great. If you believe everything you read you’d think the Foxes are heaven sent to re-write the pages of rock history cloaking them in some kind of aural magnificence hitherto undiscovered.
But that’s far from the truth, Fleet Foxes is exactly what you’d expect, possessing every ounce of My Morning Jacket vocal soar, melodies carefully borrowed from Crosby Stills & Nash, harmonies glistening with Beach Boys spirit and sharing all the qualities with every decent Americana collective to ever grace the cover of Uncut magazine.
Sure, none of this detracts from what is essentially an enjoyable act in finely tuned nostalgia but don’t be deceived into thinking this record will change your life. Heck, fellow Bella Union stablemates, Midlake, produced a record doubly deserving in praise (Trials of Van Occupier) and that was virtually ignored.
For fans of: Dad music, older brother music, crazy hip uncle music.
7/10 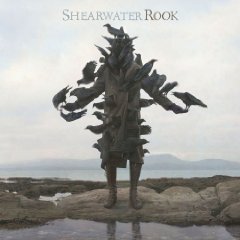 Shearwater: Rook
Matador
Speaking of ignored, why the frick aren’t all those hungry ‘next big thing’ seekers whacking one off to the misery-soaked majesty of part-time ornithologist Jonathan Meiburg‘s latest longplayer?
Why? Why? WHY?
Probably because it’s soaked in agonisingly pained vocals, drums which thud at such irregularity it’s the actual space in between which slams loudest and a tinkling of ivory which reminds me of old men in bars rattling their overly long fingernails against glasses which have been downed far too frequently as they wait impatiently for the next one as they slip deeper and deeper into their own premature demise.
I thought they’d not top Palo Santo, but by heck it’s a close one.
For fans of: Talk Talk, Harold Pinter
8/10 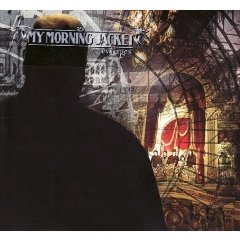 My Morning Jacket: Evil Urges
Rough Trade
You know that bit in Live & Let Die, when the guitars break down and Macca trumps ‘What does it matter to ya, when you’ve gotta job to do, you gotta do it well, you gotta give the other brother hellllll!‘
Well this whole album – except for the entirely pointless ultra-boring middle section – sounds just like that. I know Jim James is completely infatuated with Prince (who couldn’t be?), and I know Z precluded some kind of deviation from the well-tread alt-country rock domain, but Evil Urges is a step too far for the normally super-reliable MMJ – instead this ambitious collection sounds like goofy truckers jamming in an all-night diner with Kenny Rogers buggering Wild Cherry as their major influence.
Odd. In a rubber suited gimpoid kinda way.
For fans of: White funk, organ grinders.
5/10 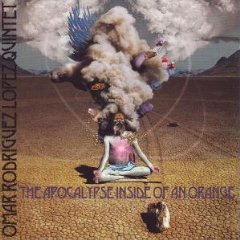 Omar Rodriguez Lopez Quintet: The Apocalypse Inside Of An Orange
Willie Anderson Recordings
Don’t you just hate the effort it takes to eat oranges – the digging in of nails, all that precious juice going everywhere but in your mouth, the whitey-yellow stain all over your fingers, carpet and trouser leg. The sting on cuticles. The white flecks of shit coating the thing preventing you from actually getting to the real tender bit of fruit. And by the time you’ve finished your mouth is as dry as a camel’s twat, the orange resembles some half-trodden on mush and you’re actually more arsed about washing your sticky hands (which are gonna smell of sour piss for the remainder of the day) than actually eating the wretched thing.
Stick to peaches.
For fans of: Acidpsychefunkwahmetaljazzgunk.
4.5/10 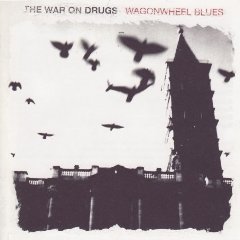 The War On Drugs: Wagonwheel Blues
Secretly Canadian
If Fleet Foxes are the new CS&N, this lot are Dylan circa Blood on the Tracks; runaway freight train souls peddling steam-rolling country-rock of the rollicking variety.
Much of Wagonwheel Blues reminds me of the dusky, dusty hard-times rock & roll of long forgotten UK troubadours Sunhouse, maybe not so much on the ear, but certainly in spirit – there’s a lost longing and a world-weariness which sucks you in and grabs the heart-strings. With Jonathan Donahue commandeering the ‘trouble everywhere’ happenings.
There’s much to admire here, and if the taste-makers drum up half the fuss they’ve made of Fleet Foxes, then Secretly Canadian could well be a very happy little label.
For fans of: Railroad adventurers.
7/10 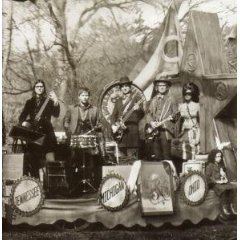 The Raconteurs: Consolers Of The Lonely
XL
If ever a band were utterly pointless it’s this shower.
Presumably Meg is so down in the dumps and Brendan so suffering from writers block and Jack so brimming with bluesy licks they all got together to piss around while watching Led Zep DVDs and came up with this hunk of globule plop.
Weird thing is XL sanctioned said globule, and then tried to rush release it in the hope we’d either be arsed (we weren’t) or we’d miss it (we didn’t). It’s here – and it’s being used as a doorstop.
For fans of: ?
3.5/10