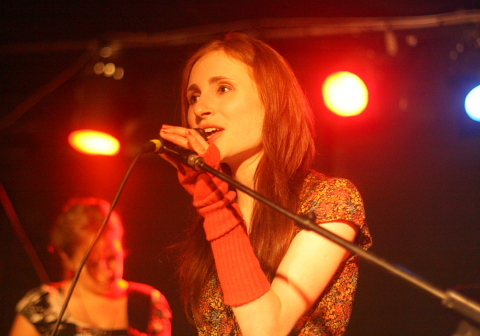 Does anyone have a tissue?

Cough… It’s not just me, but Times New Viking guitarist, Jared Phillips, and Gareth Campesinos!, that enter the Academy cubicles reaching for the loo roll simultaneously.
‘As soon as we got here, everyone was sick,’ says Philips, ‘I don’t think we brought it!? I hope we didn’t bring it…‘
What this lot – meaning TNV, Los Campesinos! and No Age – did bring in their collective Shred Yr Face tour of the UK, is a whole lot of white noise and a whole lot of fun.
This white noise is spread accordingly across the board, this is the whole lotta indie tour: whether it be the two-piece scuzz of No Age, or the slightly more refined pop of TNV (really they sound wholly there live), or the seven strong twee-schism of LC! – it’s a world away from the Oasis bombast Arena bomb of last week.
And the fun is encapsulated if not in the actions of the whole, but in the utterly mesmeric trio kit-whackers on show.
The former stix dude, Adam Elliot, all tussle-haired, brillo-padded sculptured chin, a warrior of the skins, a Greek among Ampitheatres, a Kirk Douglas in cardigan. A truly inspired figure while dueling at twin drums standing, straddling his mini set, is a work in motion. WINDMILL. Yr. YR!
It’s somewhat puzzling why a band so rooted in ferocity and indeed awesome melody (they give shout-outs to The Beatles, hey, who doesn’t here – but really, this lot are so close to Please Please Me dyed in scuzz, you’d wonder if they weren’t for real) have produced a record so obviously anti-ears, for tonight the whole set, all 20+ minutes of it, feels like a rush of dynamite pop magic. Part of me thought, I was wrong to discount previous misgivings, but writing this now, I again, managed three quarters before ‘eject’.
Tonight, TNV, are a wonder. Beth Murphy near rivals Elliot for spectacle purposes, for not only is she a complete fox – rivalled only by LC! Aleksandra Campesinos! in terms of indie princess of the year (big thumbs up to her Luther Vandross T) – but she hollers (‘I need more money, cos I need more drugs…‘ Brilliant!) and skronks that mini Korg bringing a refinded purpose to TNV’s rattle and roll – in essence they sound like a dissonant pop band. One which if they cared could trouble the top 40. Doubtful. But do-able.
You couldn’t ever imagine No Age attempting that. Or even wanting to. And tonight they showcase every reason why they wouldn’t or couldn’t.
For one they clearly live on the fringe. And there’s more than 47 times I think, wow, if only they… But they won’t. They add and subtract and twist and reduce and remain a band rooted in two guys pummelling hard, white, nasty, evil, happy, angular, meaty, beat-driven, sometimes smokey but ultimately primative punk rock. They begin by standing either side of the stage, high on the monitor stacks. This is, as show, as it gets,
Rising, looking down, before grabbing guitar and drums, and SMASH. They’re done. Simple. Effective. Nothing more, nothing less.
They’re rivetting in their restrictive noise. But three songs in and – despite the aceness from Weirdo Rippers – they’re already lacking in the out-rock they could, if they wanted, to do. Huh.
Los Campesinos! are everything, and better, and tonight, they’re the ones who ultimately steal Liverpool’s hearts. All seven – and they are – beautiful creatures capture a silly kind of indie Skins thing. I really can’t stand Gareth’s GRATING awful vocals, but his performance, his passion, his energy, and most of all his leadership is not only winning, but needed.
Here is a soul, clearly itching everything to be.
Also winning is indie anthems in making. It’s alright being an indie hero Mr No Age, but you have to win your fans, right? Los Camp, hit em hard and direct.
Hitting hard and direct is naked, but for 70s sport shorts, Ollie Campesinos!, a limb of wreckage, with a facial expression of pain, joy and weird muscle bend. yes, weird muscle bend. Get into it.
Death to Los Campesinos! has bodies jumping, You! Me! Dancing! has, for the only time tonight, the entire front three rows arms aloft, singing and hotstepping and as events reach near jacket-removeable-time (remember this is an ATP type of crowd were any sign of gyrating is seen as passe), Gareth brilliantly upturns all moniters allowing all the Los Camp crew to climb aboard and rise above the onlookers as a sea of vocals and music washes overboard.
It’s a marvellous finale. Far outweighing their indie credentials. In fact it’s almost stadium worthy. Stadium worthy!
A-tishoooo! Bless me, father, for I have sinned.

Los Campesinos: You! Me! Dancing!