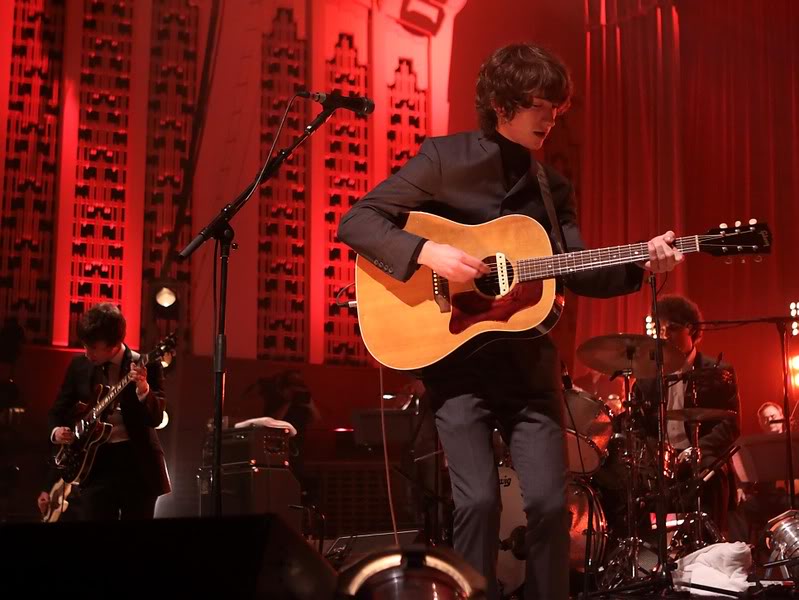 And tonight, there’s three of the bastards lining the far right corner of Liverpool’s magnificent Philharmonic Hall.
Like the gong – prog’s percussive weapon of choice – timpani are reserved for the spectacular; no bass or kick drum can come close to the resonating thunder that is projected from these magnificent kettle-shaped clangers. And within minutes we’re treated to the cinematic, booming rolls which ping off the whitewashed walls of the Phil, as Alex Turner and Miles Kane rip through The Age Of The Understatement – title track to this year’s extraordinary side-project, that is The Last Shadow Puppets.
A project clearly formed through friendship and a shared musical kinship, yet has taken the Arctic Monkey and Rascal, to places they couldn’t possibly have dreamed of, topping the second mainstage billing at the Leeds & Reading festival, bagging a Mercury nomination and sweeping to unanimous critical acclaim for their debut, with what is after all, a mere sojourn away from their day jobs. And yet, such is the impressiveness of The Age Of The Understatement, nights like this are fitting and carry something of an ‘it was destined to be like this’ feel.
The music itself is built for the occasion – In My Room, with its severe, darting violins, Black Plant finds Turner wrapping his vowels around parping brass and Parisian orchestration while Only The Truth with its stabbing, staccato rhythm sees Kane powering his vocals above fuzztone Rickenbacker and dancing percussion.
What strikes home more than on record, is just how dark and at times sinister their sound is, the combination of visceral guitar lines (as on the spiteful Separate And Ever Deadly, which sees Kane spitting the line ‘Grabbed onto my throat and won’t let go, save me from the secateurs‘), whirlwind arrangements (I Don’t Like You Anymore) and menacing ambience (a chilling rendition of Hang The Cyst a particular high on a night when there’s many) transfixes a starstudded crowd who barely breathe, let alone shift in their seats such is the dramatic tension.
Thankfully, there’s enough light to balance proceedings as the gorgeous swing of Meeting Place finds the room finally standing and swaying to Simian Mobile Disco‘s James Ford‘s brushed drums as Turner implores, ‘You can stand up if you like.’
Better still, The Time Has Come Again, finds the pair – who it would hardly surprise if it were revealed were actually born of the same parentage such is their twin personas – exchange wry grins with Turner tenderly taking the mic as Kane plucks his acoustic amid a flutter of strings.
Of course, tonight is the culmination of a magical year, and with the Scouse Cognescenti (Zutons, Coral, Rascals, Eva Peterson Candie Payne, Pete Wylie – and of course Carl from Hairy Records) all out in force we’re treated to a number of one-offs, Bowie‘s In The Heat of The Morning is a slight mis-step, bettered by rousing takes on Nancy Sinatra and Lee Hazlewood‘s Paris Summer (with Ipso Facto‘s Rosalie Cunningham taking to the stage) and an apt cover of The Beatles‘ I Want You (She’s So Heavy).
A stunning rendition of Leonard Cohen‘s Memories sees the Liverpool faithful joining in with the boogie.
They exit the stage as the final strains of a fizzing, Love-inspired Standing Next To Me rings out leaving little doubt, timpani or no timpani, that this was far from an ordinary affair.
Setlist:
‘In My Room’
‘The Age of the Understatement’
‘Calm Like You’
‘Black Plant’
‘Gas Dance’
‘Only The Truth’
‘Separate And Ever Deadly’
‘Hang The Cyst’
‘I Want You (She’s So Heavy)’
‘My Mistakes Were Made For You’
‘Paris Summer’
‘In The Heat of The Morning’
‘I Don’t Like You Anymore’
‘The Chamber’
‘The Time Has Come Again’
‘Meeting Place’
‘Memories’
‘Standing Next To Me’ 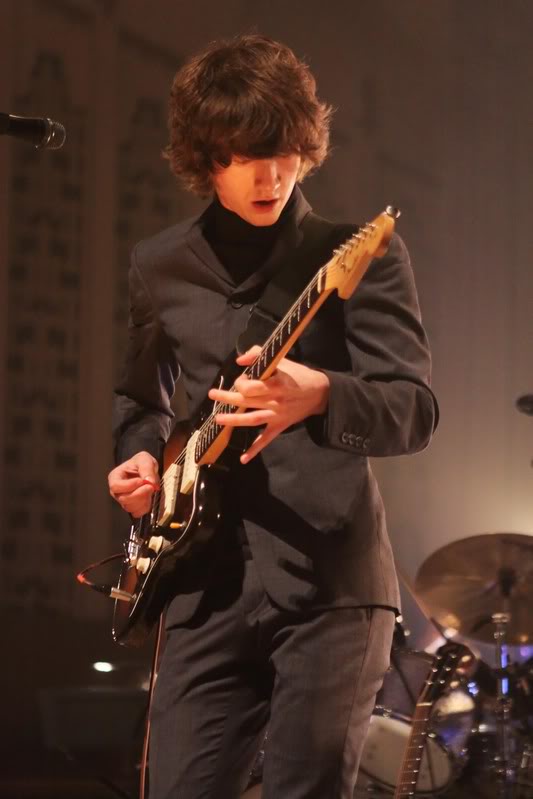 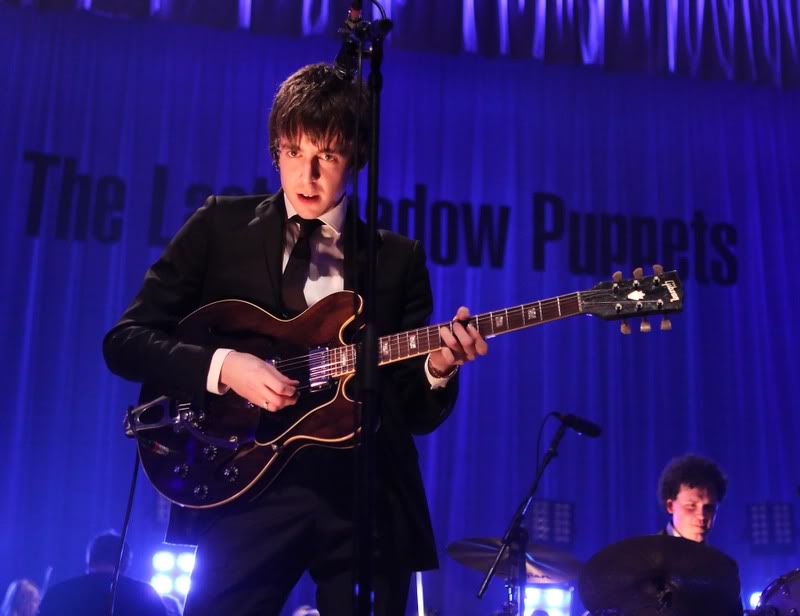 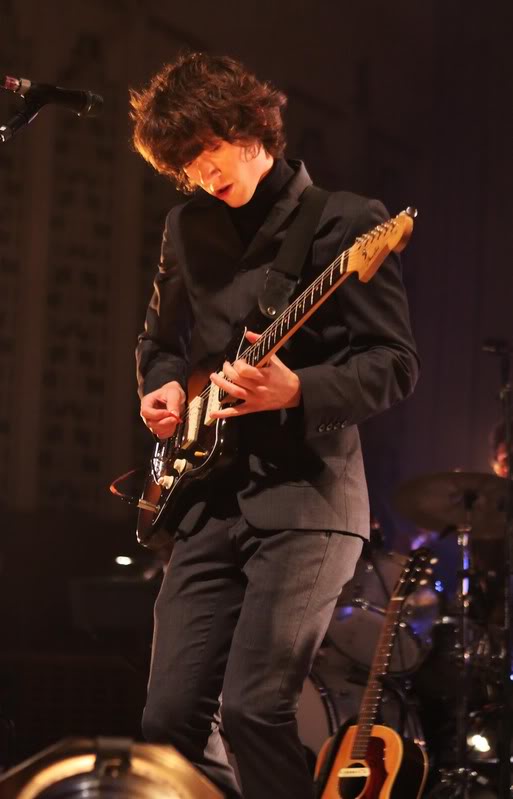 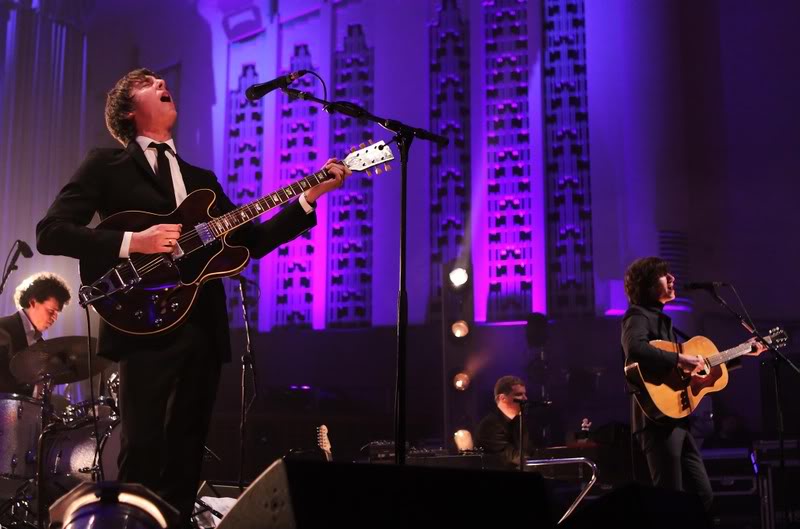 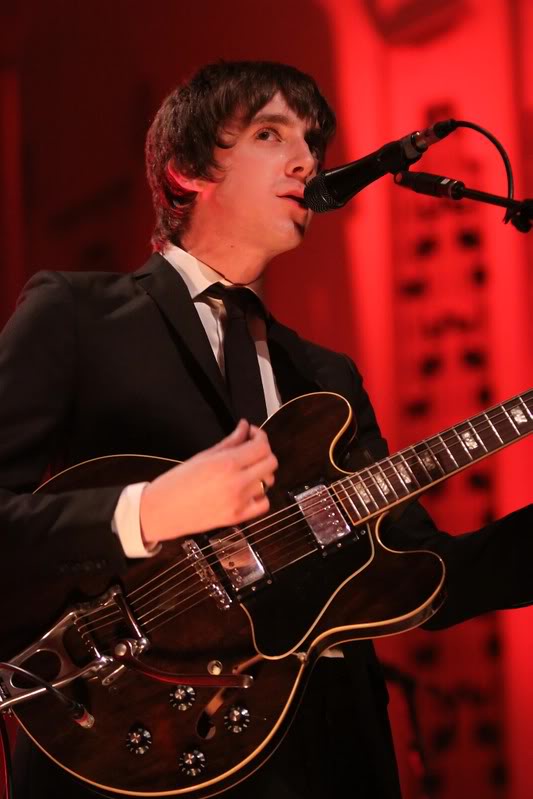 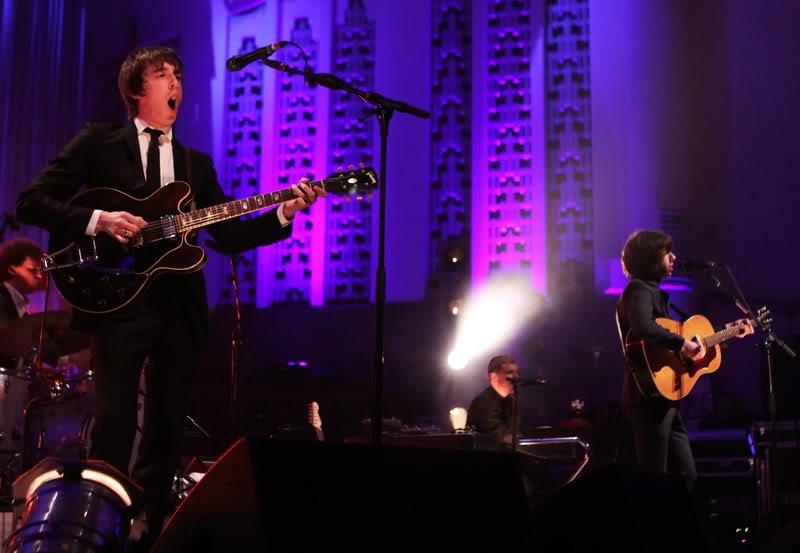 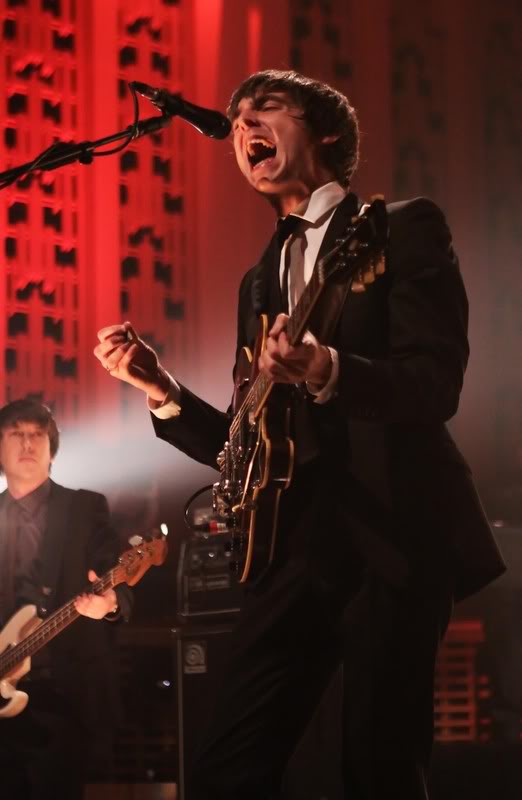 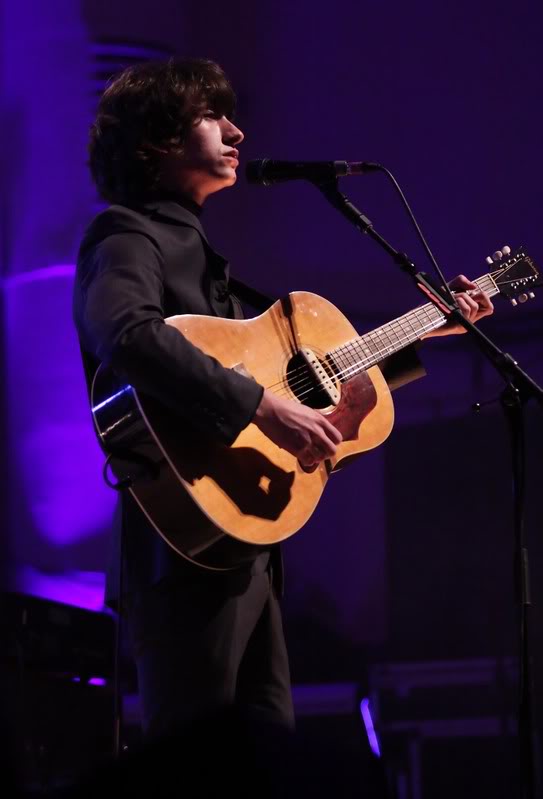 The Last Shadow Puppets: Standing Next To Me