Ah, the most neglected of formats – the EP – why don’t more bands release them?

It’s a question I’ve asked myself more than once. Especially when you consider how many very poor long-players there are doing the rounds with but a handful of decent tracks.
Surely artists must realise this when they’re scraping the grubby remnants off the cutting floor and scooping them on to the final mix. Consider how good an EP A Weekend In The City would have been Kele and co. had slashed it down to a nifty five-tracker or if Death In Vegas had taken a chainsaw to Satan’s Circus resulting in a mini Kraut cracker instead of some stodgy mind warp of synth overkill and Kraftwerk pastiche.

Death In Vegas: Ein Fur Die Damen
Better still, imagine if Standing on the Shoulders of Giants ran: Fuckin in the Bushes, Go Let It Out, Who Feels Love, Gas Panic and Let’s All Make Believe. A stone-cold five starer if ever there was. Instead we’re left with a half-arsed, bloated whopper, which is kinda ironic given Noelly used to shit great tunes and bang em on as B-sides.
This of course ties in with the whole EP discussion, as early Oasis releases (in a bygone age were bands were allowed to release singles which lasted more than 20 minutes, while now they’d be chart ineligible) – felt like Extended Player’s and were easily on a par with their albums; four new tracks, all killer and no filler.
Now you get one track and a handful of remixes by some bloke down the pub.
But the EP is not simply about several great tracks, it also gives artists the chance to fuck about a bit. Leave their trademark sound and dabble with adventure. Take Sigur RÃÂ³s Ba Ba Ti Ki Di Do a quite remarkable exploration of clicks, fragmented collages of xylophonic noise, washes of dramatic piano and what sounds like man have a drunken argument played backwards.
It’s quite possibly their finest release. Yet the albums that followed reverted to their Enya shagging a whale signature sounds. Great and all, but nothing you’ve not heard them do before.

Sigur RÃÂ³s: Ba Ba Ti Ki Di Do
Certain bands thrive when it comes to the EP. Gomez and The Music are two particular favourites. The latter’s preposterously-named You Might As Well Try To Fuck Me EP contained the epic Too High – a track they’ve yet to match, and which was later included and remixed for their second LP Welcome To The North.
While Southport’s Gomez released a sequence of highly collectable EPs after their Mercury-winning debut, all of which were compiled on the similarly preposterously-named Abandoned Shopping Trolley Hotline containing such belters as Steve McCroski and nine minute wah-feast Buena Vista.
Perhaps my favourite EP is Oceansize‘s Music For Nurses. Four tracks which blend into one another with seemless precision from the sledgehammer opener One out of nOne to the cataclysmic finale of As The Smoke Clears .
It’s no surprise the critics were drooling.
A discussion on the EP wouldn’t be complete without a nod to Pitchfork’s 23rd greatest album of the 1990s: The Beta Band‘s The Three EPs. A record which was played more times on my CD walkman travelling to and from Uni than any other. A record which me and friend Haydn sang the multi-harmonies to Inner Meet Me in Leicester’s Victoria Park so poorly it scared the squirrels. I’ve eulogised about it on here many a time, but really, if you don’t own it I implore you to invest. 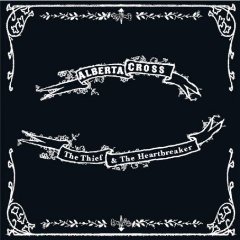 Alberta Cross: The Thief & The Heartbreaker
Ark Recordings
You’re hardly selling a band by comparing them to Neil Young, Ryan Adams or the hundreds of other alike-ys there are lashing out reems of alt-folk Americana, but there’s something innately special about Alberta Cross and their ability to transform these well-worn characteristics into something quite outstanding.
Whether it’s Petter Ericson Stakee‘s cracked howl (dig Low Man‘s Wild West hollering blues) or Terry Wolfers‘ ready to drop to his knees guitar strum, Alberta Cross mean every note of it.
If you’re in doubt just awe at the magical The Devil’s All You Ever Had as the music buckles under the weighty strain of lonesome riffs and cries of desperation, or kick back to the railroad swagger of Hard Breaks, a track which’d give the Followill brothers a run for their money in Southern-fried perdyness.
8/10 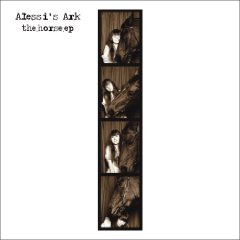 Alessi’s Ark: The Horse EP
Virgin
Alessi Laurent-Marke is a teenage wonder. All the kooky magic of the usual suspects (Kate Bush, Bjork, Bat For Lashes, Alison Goldfrapp etc) are injected with a subtle and varied instrumentation which is shaped by her slight husk, slight glass-cutting, slight posh-bird coo.
Neighbours Birds, with it’s harpsicord meander, could have dropped straight off the Milk-Eyed Mender, such is its medieval yet modernistic charm while Let’s Race is a slow waltz as Alessi dancers with water and invites the faeries to bathe in her magical aura before the whole thing kicks off like a fairytale pageant with strings, bells and trumpets – all very probably played by grinning nymphs.
Just in case you weren’t green with envy that this 18-year-old is clearly showing off, she rams home her aceness with the less than two-minute title track which clipperty-clops, all beating woodblocks and hushed tones before a harp and a lightly-thrummed acoustic transport you to a land of make believe and fluffy clouds.
Alessi will be 2009’s breakthrough.
8/10
http://www.myspace.com/alessisark 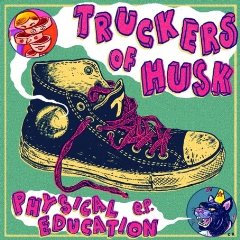 Truckers Of Husk: Physical Education EP
Kung Fu Recordings
Quite frankly this is one of the releases of 08. Imagine Battles duelling with Oceansize and adding the Go! Team‘s funness – Truckers of Husk are that good.
They’re also incredibly annoying as they rarely tour. But when we caught them Latitude they blew away the competition on the BBC’s Introducing Stage, inviting half the crowd up to sing and dance to their finale – it was pant-wettingly ace.
Specialising in looping guitar lines, which have seemingly been devised by the medium of algebra and they injected with long division, (they make Foals sound as straight as Alphabeat), and fragmented rhythms, ToH excel in the short bursts of spazzing before mini breathers – often inserting lovely sweeping strains of cello – before careering headlong into frenetic jizz-splattered conclusions.
EP highlight Panther Party should soundtrack a ridiculous chase scene in a wham-bam blockbuster; all insane six-string acrobatics, punching drums and an ADHD vocal volley which is completely indecipherable but totally ecstatic.
Getintoit.
8.5/10