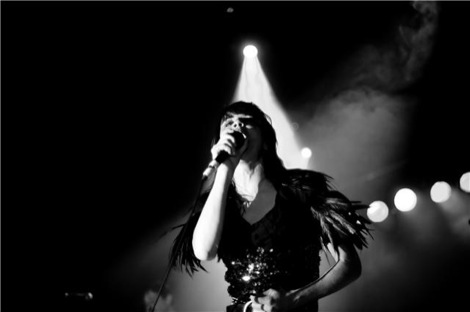 Andy Paton finds Juliette a stunning watch. But God awful on the ears.

THERE is one word to describe the onstage antics of rock goddess Juliette Lewis – mesmerizing.
From the moment she walked onstage clad in rock chick chique donning a black feathery poncho hugging her shoulders and some tight, shiny black pants, she had everyone’s attention.
But her look firmyl overshadowed her tunes with the audience seemingly more interested in seeing, rather hearing, this Hollywood star.
Countering the muted reaction she screamed: ‘Did you come here to go to the movies or go to the circus or did you come to see some rock and roll?‘
Hard to say…
The New Romantiques meanwhile are solid, meat and potatoes, and while Juliette’s style may be rocking her music firmly isn’t.