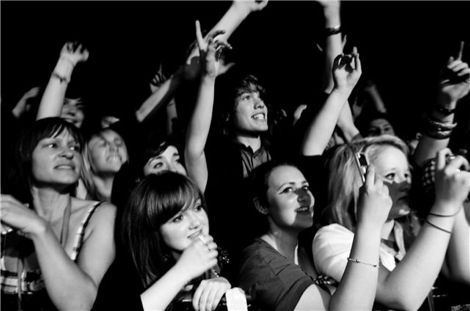 Being friendly goes a long way, and Sky Larkin‘s Katie Harkin certainly won over the crowd during the band’s Sound City set with her charm.
The Yorkshire three piece talked of fish tanks and Thomas the Tank Engine as they ripped through one energetic tune after the next, to a slowly advancing audience of fans in Korova’s basement.
The band are not the twee flowery act that they have been characterised as- there is far more of a punk spirit than Britpop jangle.
Catchy hooks and great guitar work meant each short burst of music during their set kept the crowd in the palm of their hands.
The fast paced crashing drums of songs like Molten and Katie’s delicate but forceful vocals sounded great, as did the anecdotes told with such unassuming sweetness.
She ran through one about how the trio took a trip to the Beatles Story museum earlier that day.
Drummer Nestor Matthews took exception to Ringo‘s biog including the fact he was a “stylist”, but not how he narrated one of Britain’s best-loved children’s programmes.
Her willingness to chat and the intimate nature of the venue made for a warm atmosphere where everyone seemed to feel at ease.
Recent single Beeline brought the set to a close, and Katie’s up lifting vocals coupled with a climax of guitars and drums ended the night on a high.
What a lovely lot.