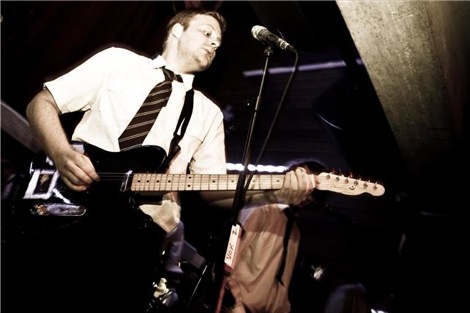 Matt Eland legs it round Liverpool, and then ends up moaning about too much music. The big girl.

Too much music can spoil a man, and Thursdays line-up presents a bit of a dilemma – whether to see Titus Andronicus or Crystal Antlers. In the end I opt for both and only catch ten minutes of each, leaving me with a strange, empty feeling inside.
Luckily, Peter and the Wolf are able to fill it in the Zanzibar. If you haven’t already seen them you probably should.
They are, in many ways, the perfect pop band – technically proficient, with bass that gets right into your throat, whether it’s stand up or electric.
Dig deep into the lyrics and there are hidden depths that reward repeat listening – closer ‘Golden Stars‘, a tale about a juvenile delinquent who breaks into a school, is a particular highlight.
The much-hyped Vessels are next, and while they have a nice line in ambient interludes, they’re not really adding anything new to the post rock cannon. Kudos to the drummer, though, for keeping time whilst a speedy time lapse projection is beamed into his eyes.
Two-piece Dirtblonde are poor. Whether it’s the practically empty venue or something else, they both look jaded, and their lack of enthusiasm is met with a similar response from the audience.
Even the drum machine sounds sluggish, with riffs that don’t quite fit the programmed beats, and the artifice of the guitarist’s attempts to inject some rock and roll rebellion into the closing song is painful, with the petulant smashing of a peroni bottle against the Korova’s mirrored wall, as opposed to his instrument, which he opted instead to lamely swing around his head. Something, clearly, is up.
One question bothers me during the ASBO’s set.
How did they get their guitarist into the venue? He’s quite clearly several years below the legal drinking age, and yet somehow, he holds his own amongst his elder cohorts, adding to the band’s considerable charm.
A big, bold sound underpins the darkly comic lyrical content, with tales of serial killers and unsettling Freudian dreams.
The singer states that he hasn’t had this much fun since he saw ‘four Eddie Stobart vans in a row‘ and while they’re not going to win any prizes for originality, it’s this sense of fun that stands out amongst the overwhelming proliferation of bands over these four days.
ASBOs
Peter & The Wolf