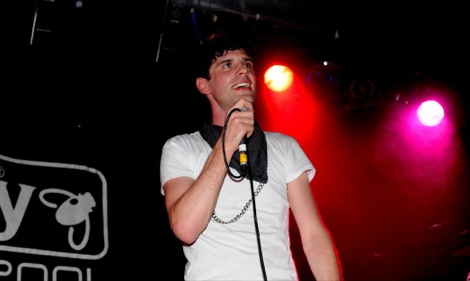 The new boy on the block is in impressive form, Greg O’Keeffe gets involved.

Dan Black may be a Paris-based Londoner but he seemed right at home on stage at the Barfly during his impressive set at Liverpool Sound City.
The hotly-tipped and multi-talented indie boy delivered a set which left the venue bouncing and did his profile, which is still slightly under the radar, no harm at all.
Highlights of a manic genre-mashing performance, during which tall and gangly Black built up a good rapport with the audience, included his former ode to a faltering realtionship ‘Yours‘.
But the biggest cheer of the night was reserved for his slick reworking of rap legend Notorious B.I.G.‘s Hypnotise.
Black recently had to change his verison Hypntz to Symphonies after Small’s estate decided at the last minute to deny him permission to use the original sample and lyrics.
The track, which had been a hit on Youtube, also borrows the beat from Rihanna‘s Umbrella combined with Black’s own plainative rap.
Instead Black showcased the Symphonies version of the song with his own lyrics and a similar sample.
Luckily it lost none of its euphoric, yearning feel despite missing the hypnotised refrain. After a successful visit to Liverpool, everything is now boding well for the release of his debut album in July.
Dan Black